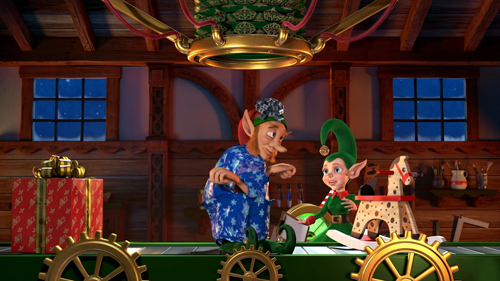 Walking past the town center, Ms. Claus and I headed toward the cluster of workshops behind the village. Arriving, we marveled at the colorful patterns connecting the workplaces of the elves. “Reminds me of those water parks we have visited during the summer, doesn’t it?” I asked Ms. Claus as we sat on a bench along the walkway.

“When Houser and Bernard first proposed this system,” she remarked, “I knew that it would help move elves, materials, and finished toys quickly and keep all workers from having to go outside in bad weather. Yet, I never imagined there would be so many colorful additions.” Smiling, Anya slipped her arm through mine and added, “Kind of looks like a twisted rainbow.”

Grinning, I began to explain the operation that would soon be completed later today. “In our meeting this morning, my warehouse manager, Houser, and Bernard said they expect to have the series of slides and conveyors, inside those brightly colored tubes, ready for testing before dinner.”

“I’m sure you will be happy that this new structure to move materials and elves around the workshops and warehouses will be ready for this Christmas season.”

“You bet!” I exclaimed. “It’s hard to believe that I originally made everything in my cottage long ago. Now I have these,” I said, pointing towards all the buildings.

Turning our heads, we stared at my head elf and asked, “Ready for what?”

“To test the new operation for moving materials around your cluster of workshops and warehouses. What else would I be talking about?” Bernard asked shrugging his shoulders.

Ms. Claus patted my knee and gave me a little kiss on my check. Not wanting to interfere, she said, “You need to go Santa.” Standing to leave, she added, “My assistant, Sophia, and I have things to take care of in the mailroom. See you at dinner.”

After Ms. Claus left, Bernard and I strolled toward the Doll and Dollhouse Workshop. “So, you are probably wondering about all the different colors.”

“Ms. Claus and I were just talking about that.”

“Each tube color identifies what is being moved inside it.” Seeing the frown on my face, Bernard continued. “The blue tubes carry mail to the different workshops and departments, while the yellow ones transport supplies to all the workshops.”

“Those must be the ones with conveyors?”

“That’s right Santa. The other tubes have slides in them.” Having reached the workshop, Bernard opened the door for me. “Come in and let me show you how they work.”

Once inside, I stopped to watch. A ten-foot conveyor extended out of the wall with the materials to make dolls slowly moving along it. As three elves took the materials off the belt, they placed them into the appropriate bins for the workers who created the dolls. “This is great!” I exclaimed.

Excited to show me everything, Bernard insisted, “Let’s go upstairs where you can see the system for transporting elves from workshop to workshop.”

Arriving on the second floor, I expected to see a conveyor, similar to the one downstairs, but when we stopped, Bernard pointed to what looked like a whole in the wall. “This is how the elves will travel from workshop to workshop without having to go outside.”

“Can I show him?” asked Jellybean jumping up and down with his hands raised in the air.

In a flash, the elf ran over and jumped into the hole and squealed, “Whee!”

I ambled over to the hole and listened as his voice faded. “That looks and sounds like fun!” I shouted. “I’ll meet you at the bottom!” and with that I jumped into the hole.

“SANTA! NO!” Bernard screamed in an attempt to stop me, but it was too late.

I could feel my face turning red with embarrassment as soon as I leaped into the tube. Instead of joining Jellybean, I realized I was stuck in the opening.

With the help of two other elves, Bernard grabbed my arms and pulled me out. Grinning he explained, “The green slides are just for elves Santa.  After all, when an elf is wanted in a workshop he or she needs to get there quickly. The size of the slide allows for that. If we made it big enough for you, it would slow them down. Besides we made some just for you.”

“How do I know which ones I will fit in?” I wondered.

“I can’t wait! What about the purple tubes?”

“Glad you asked. Let’s go over to the production line.”

Approaching the track, I could not help but notice that it was extended to connect to the green slide in the wall. I stood and watched as the dolls and dollhouses got to the end of the production line and quickly disappeared down the slide. “So, these go directly to the warehouse?” I asked.

Before Houser or Bernard could answer my question, the elf Duffer yelled, “I need to report for work in the warehouse.” And before any of us realized what was happening, he jumped into the slide.

“Noooooo!!!” Houser screamed! But it was too late, Duffer was gone.

Giving Bernard and Houser a strange look, I asked, “I don’t understand. He had to go to work and the slide goes to where he is supposed to be. What’s the problem?”

While Houser phoned the warehouse, Bernard shook his head and explained, “Part of the new system includes an automatic wrapping station at the bottom of each warehouse slide.”

Not understanding, I responded, “So?”

“Well before Duffer can get off the slide, he will be put onto a conveyor belt and gift wrapped.”

Hanging the phone up on the wall, Houser updated us. “The crew at the bottom found him squirming inside a package and let him out. He does not seem to be hurt.”

“That’s good!” I insisted. “I’m guessing the testing phase will need to include proper training of the elves.”

“We will be doing that as part of the testing,” Bernard responded, “but for now, let’s continue the tour and pointed in the direction of Patches’ office. “Slides along with the tubes for mail are in the supervisor’s office in each workshop,” Bernard informed me. “Let’s go check it out, then Houser and I can get down to the testing and teaching phase.”

When I walked into Patches’ office, I saw the small blue tube for mail right next to her desk. It wasn’t until I turned to the right that I saw the red and white one for me. “This is mine,” I asked knowing full well it was.

“That’s it,” Houser said. “This will take you right back to your office in much less time than if you walked there.”

I couldn’t control the excitement and hopped into the tube. This time, I did not get stuck. Instead, I felt like an eight-year-old again as I slid down screaming “YEEESSS” all the way to my office.

When I disappeared, Houser looked at Bernard. Shaking his head, he asked, “Do you think Santa will act like this every time he uses his slide to get around Claus Village?”