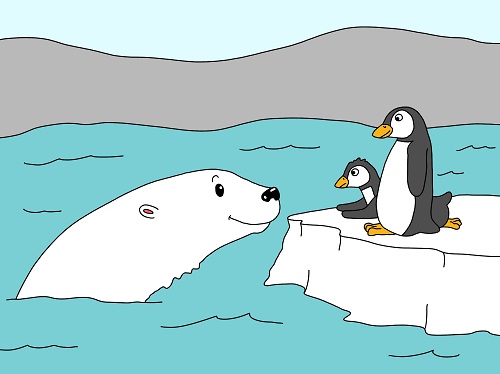 Wiggle had laid down to sleep and when he woke, he rolled onto his right side and there stood Waddle. Flippers crossed, tapping his foot, and staring right at him, he impatiently said, “It’s about time! I’ve been waiting forever for you to get up.”

“I didn’t know we had to get up at a certain time.”

“I’m just nervous. You know, we are not at home and have a lot to learn about the North Pole. I thought we would go out and explore a bit? Maybe we can find something for breakfast in one of the fishing holes Nippy showed us yesterday.”

Just the mention of breakfast, made Wiggle’s stomach growl. Jumping up he cried, “What are we waiting for? Let’s go!”

They headed down the ice corridor to the South entrance. Once outside, they could feel a steady breeze blowing from the West, causing some of the new snow to form drifts several feet high.

The penguins wobbled across a small field. They continued up a small hill and, once on top, they both saw one of the fishing holes Nippy had shown them. Looking out over the water, Waddle said, “Hey, look at that. Is that a slab of ice floating out there?”

Scanning the water, Wiggle responded, “Where? I don’t see anything.”

Just as Waddle finished saying that, the ice disappeared once again. “What the heck! Did you see that? The ice sank under the water. Ice can’t sink like that.”

“We are in a new place and maybe things are different here. Let’s go down by the water and see if there might be some fish for us.”

Like two little children on sleds, they both threw themselves down on their bellies and slid all the way to the edge of the water. Just as they began to stand back up, water came up over the ice and swamped the two of them. Looking up, they could only see what looked like a gigantic piece of ice coming out of the water.

With the crest on top of his head standing straight up, Wiggle rolled to his right. Waddle growling, as a penguin does when it senses danger, dove left. The ice they were on shook. When everything settled down, Waddle got up looking for Wiggle, hoping he had escaped being crushed. Between him and Wiggle the huge white glob appeared to be moving and rising up. “How could that be? Ice cannot move on its own,” he thought.

Standing, Wiggle stared horrified at the moving hunk of ice. As both started staggering backwards, Waddle squealed, “That’s not ice, that’s some sort of white beast!”

Once the large, white hunk reached its full height, the two penguins heard a deep voice say, “Don’t be afraid, I didn’t mean to scare you. I’m Polar Pete.” Turning to face the penguins, the tall white hunk continued, “You must be Wiggle and Waddle. Nippy told me all about your adventure from the South Pole.”

“What are you? We have never seen any creature as big as you are,” Wiggle managed to say while still staggering backwards.

“I’m a polar bear, and while penguins only live at the South Pole, we only live at the North Pole. That’s why you didn’t know what I was. I’m one of Santa and Nippy’s friends here. You must be Wiggle?”

“Nippy told me Waddle was taller, and that was how I would be able to tell you apart.”

Curiosity had a hold on Waddle, and with his fear fading, he asked, “How do you swim? Seems you would just sink as big as you are, and you don’t have any flippers?”

Laughing, Polar Pete informed his new South Pole friends, “First, it’s my body fat that makes me float. And then look at these,” holding up his enormous front paws he continued. “They make great paddles to move through the water.”

Polar Pete’s talking about eating reminded Wiggle why they had come out of the cave. “Waddle, do you think we can get some breakfast now?”

Happily, Pete said, “Tell me what you like, and I’m sure I can help you find it.”

“We love fish,” Waddle stated, eager to get breakfast.

“Join me then, and we can all go get something to eat. You may have to swim pretty deep to get to some of the fish, would that be okay?”

Together Wiggle and Waddle responded, “Okay!”

Then Waddle added, “Lead the way, we are famished.” With that the three new friends dove into the water and swam away in search of their breakfast.

One Reply to “Wiggle and Waddle meet Polar Pete”