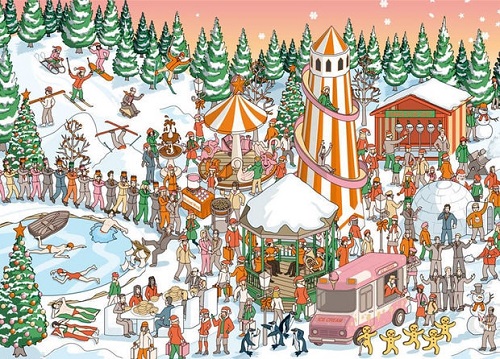 Quinten, manager of research and development, knocked on Santa’s office door. When he didn’t answer, the elf hesitated and then opened the door. “Santa, are you in there?” he called, sticking his head inside. Finding the office dark, he closed the door. “Strange Santa isn’t here this time of day.”

The head elf smiled and pushed aside piles of papers. “Quinten, have a seat. What can I do for you?”

“I was hoping you could tell me where I might find Santa. I’ve been working on a project for him and need more information.”

Bernard began tapping his pencil on the desk like a drummer. “Hmm. I haven’t seen him since this morning. Did you try the Mail Room? He likes to check it more often the closer we get to Christmas.”

“Yeah, why didn’t I think of that,” Quentin said lightly slapping the side of his head. “Thanks.”

“You got it. I’ll let Santa know you’re looking for him.” Bernard answered, returning to his stack of papers.

Quinten strolled toward the Mail Room. Entering, he asked the workers if they had seen Santa. All of them shrugged their shoulders except Babble. “Sorry, he was here earlier to ask me to translate some letters. Try the List Vault,” Babble responded, pointing to the door on the side of the room.

Quinten nodded and walked over to read the sign above the door: Nice & Naughty List Vault. Under it was posted a warning: Do Not Enter. To speak to someone, use the intercom below.

Pressing the red button, Quinten heard, “May I help you?”

“Booker this is Quinten. I was wondering if Santa was in there with you.”

“Earlier this morning, but I haven’t seen him for several hours now.”

“If he returns, tell Santa I’m looking for him.”

Before leaving the Mail Room, he heard Babble ask, “What time is it?”

“Afternoon snack time for the big guy. Check the kitchen.”

Quinten exited the mail room and strode over to the dining hall. As he approached the kitchen door, Blanch came out. Startled by the elf’s appearance, she looked concerned. “Quinten, lunch is over, but I could make you a sandwich if . . . “

“No, no, no,” Quinten chuckled. “I was here for lunch. I’m looking for Santa and thought he might be here.”

“He was a while ago.” She laughed and started to explain. “He didn’t think I saw him when he swiped about a half dozen cookies, but after all these years, I know exactly what he’s up to. I’m not sure where he goes, but it has to be a place where Ms. Claus can’t catch him.”

Quentin howled as he thought about Santa and his love of cookies. “Thanks Blanch. I have no idea where that might be. Guess I’ll try to find him later.”

Leaving the dining hall, he wandered outside. “Afternoon Ms. Claus,” he said as he noticed her quick steps across the courtyard. “Are you in a hurry?”

“Well good afternoon, Quinten. Not really, just need to get back to the Mail Room. Lots to do.” She was about to enter the door closest to the dining hall and turned. “Why the glum face?”

“I’ve been looking for Santa and can’t find him.”

“Did you check his office?”

“I’ve searched everywhere,” he said rubbing his hands anxiously, “but no luck. I have some concerns about this project he wanted me to develop, so I need to talk with him before I work any further on it.”

Anya grabbed Quinten’s hand saying, “Come with me. I think I can help you.”

Returning to Santa’s office, she opened the door.

Smiling, Ms. Claus reached in the room and flicked the lights on, and pushed the door all the way open. When she stepped to the side, there was Santa, sitting on the couch with an empty plate.

I looked up at my wife’s bemused face. “I Love Blanche’s cookies. No one can top her.” Smiling, I finished my last cookie

Anya rolled her eyes and chuckled, “You see Quinten, Santa has this routine where after lunch he sneaks into the kitchen and helps himself to some cookies. He thinks nobody sees him, but all the kitchen elves know what he’s doing. Then he comes back to his office to eat them in the dark.”

With a quizzical look, Quinten asked, “Why in the dark?”

“Well, you see, Santa thinks if he eats his cookies in the dark, I won’t find out. And if I don’t find out, I won’t put him on a diet.”

My face reddened as I stood up and brushed the crumbs from my beard. “I’m just trying to get into shape for Christmas.”

“I think your Santa figure is just fine!” Quentin said as he patted my belly. “But Ms. Claus has a point. Too much of a good thing isn’t always the right thing to do,” chuckled Quentin.

I giggled and shook my head. “Never thought my elves would side with Ms. Claus like this.”

I hope you enjoyed today’s story. I will post another one on Tuesday November 15th. If you have any comments or if there is something you would like me to tell you about, please feel free to leave me a comment. Until the next time . . .

To read more about Santa please check out

Illustration from My City My Choice