When Tempers Flare at the North Pole 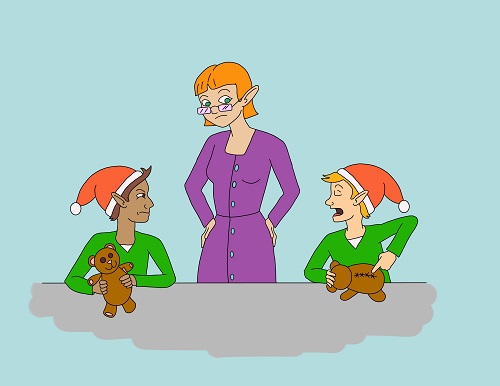 Tatler walked past the stuffed animal toy shop on his way to his job in the reindeer barn, when he heard Stanley and Brixton yelling at each other. It appeared they both thought of themselves as the best at making stuffed animals, and their tempers were flaring.

Thinking that Bernard, the head elf, should know about this, Tatler headed toward his office. When he arrived, Bernard and I had been looking over production reports. We needed to be sure there would be plenty of the most popular toys.

Nearly out of breath and with a concerned look on his face, he stuck his head in Bernard’s office door and said, “Bernard, Santa, do you have a moment?”

“Sure. Come on in,” Bernard replied.

Getting up and pulling a chair over for Tatler, I said, “How can we help you?”

“I really don’t like telling you this, but I just heard Stanley and Brixton, in the stuffed animal toy shop, arguing over their work.”

“Well that’s not good, and certainly not elf-like,” I said.

I then turned to Bernard and simply said, “Temperance?”

“I could not agree more,” Bernard responded. “She would be perfect for this.” Pushing the intercom button, he continued, “Telsa, could you ask Temperance to come to my office?”

“I’ll tell her right away, Bernard.”

All the elves call her Tempe. She’s the calmest elf, has never raised her voice to anyone, and has the unique ability to help others get along. You could ask any elf who their best friend is, and they would most likely say ‘Tempe.’

When Bernard finished talking with Telsa, I said, “Tatler you did the right thing letting us know. Bernard and I will take it from here. You should head over to the barn. Highstep will be looking for you to help feed the reindeer.”

A few minutes later, Tempe knocked on the frame of Bernard’s open door, and said, “You wanted to see me?”

“We do,” Bernard replied. He pointed towards a chair, “come on in and have a seat. We have a special job for you today.”

At four feet, six inches tall, Temperance, is one of the tallest elves. Thinner than most elves, she usually wears long button up dresses, and glasses.

“Tempe, it seems Stanley and Brixton are having a problem getting along with each other today. We heard that their tempers flared up over who’s the best at making stuffed animals,” I said sinking into Bernard’s overstuffed couch.

Bernard leaned forward in his chair, and placing his elbows on his desk, he put his hands together as if to pray. “We hoped you could get them to solve their differences,” he said.

“I would be willing to see what I can do. Would you like me to look into it now or after their shift?” Tempe asked, standing up and smoothed her dress.

“I think the sooner the better.”

Turning toward the door, “Then I’ll go right over and see what I can do.”

When Tempe walked in the workshop, she immediately heard the two elves arguing. Moving across the room she came to the table where the elves worked and said, “What are you two so upset about?”

Stanley wasted no time.  He explained to Tempe, “Brixton is not pulling his weight! I am making two animals to his one, yet he claims he’s the best . . .”

Brixton immediately broke in at Stanley’s claim, “In your dreams! I can build more animals than you any day!”

“Okay, I think I heard enough,” Tempe said. “You have been friends and working together for a long time, and I don’t think you should let this get in the way of your friendship.” She asked Stanley, “What do you think causes Brixton not to make as many animals as you?”

“He cannot sew the back of the animals up fast enough!”

She turned to Brixton and asked, “What do you think causes Stanley to not make as many animals as you?”

“He is too slow at putting the stuffing in!”

“So, if I understand it correctly, Brixton you are the best at stuffing the animals, and Stanley you are best at sewing their backs up. Do I have that right?”

Stanley with his hands on his hips, and Brixton with his arms folded on his chest, both nodded in agreement.

“I think I see a solution. Instead of you each stuffing and sewing your own, Brixton you should stuff all the animals, and Stanley, you sew them all up. Doing that I think you can make more together than you each did alone.”

The elves faced each other and Brixton said, “She has a point. We’d be helping Santa if we could make more.”

“I agree,” Stanley added, raising his right hand to shake Brixton’s, “after all you are better at stuffing than I am. Let’s give it a try!”

As Tempe walked out of the workshop, she overheard Brixton say, “I like working with you where we each get to do what we like best!”

“Could not agree more! Hey, what would you say to a game of checkers tonight after dinner?”