Wearing of the Green 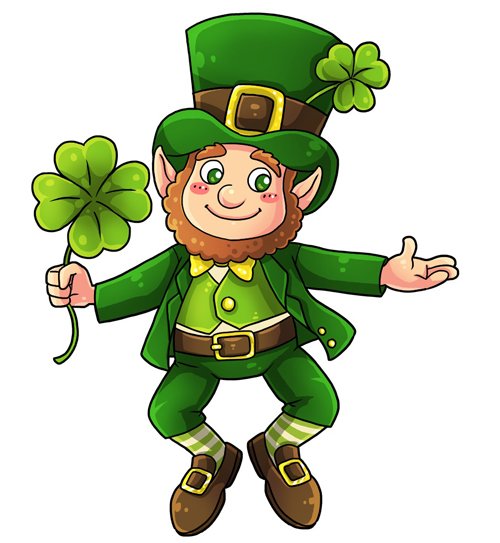 “Top of the Morning to you, Blanch,” remarked Anya as she slipped quietly into the kitchen.

“You look grand in your green including those shamrock stockings, Ms. Claus.”

“Thank you,” Anya responded smiling as she walked to the stove. “If we want this Irish breakfast to be a surprise, everything needs to be ready on time, so put me to work. Can’t wait to see the looks on the faces of the elves and Santa.”

Looking around the kitchen, Blanch explained, “With the soda bread cooling on the racks and boxty (Irish potato pancakes) in the warming dishes, you and Hannah can fry the sausages, mushrooms and tomatoes. When I’ve finished making the drisheen (black and white pudding), I’ll come over and help.”

“Even though I’m proud of my Irish ancestry, Blanch, I’m not sure about the pudding,” Ms. Claus responded as she dumped the mushrooms into a large skillet, but I’ll try some.”

They both laughed and continued to prepare the special breakfast. Knowing that Santa and the elves would soon arrive, they worked quickly and finished with time to spare. While Blanch directed the kitchen staff to bring out the food, Hannah and Ms. Claus opened the dining hall doors promptly at 8:00 AM. “Top of the morning to you,” they announced.

“What’s this?” I exclaimed, dazed by the garlands of shamrocks draped around the hall.

As the elves pushed past me, they stared at the images of leprechauns, fairies, small cottages, and green fields that decorated the walls. “Welcome my friends to a little bit of Ireland in the North Pole, Happy St. Patrick’s Day. Now find your places quickly,” Blanch announced chuckling.

“This way, Santa,” I heard Anya say as she led me to our special table by the fireplace.

“Amazing, I never expected this,” I remarked giving my wife a kiss.

Taking our places, we soon enjoyed the taste of fried eggs and sausage as well as the other food on the table. “I realize you don’t know much about St. Patrick,” Anya explained after finishing her breakfast, “but he was kind and caring like you Santa. He wanted the best for the Celts, the Irish people, and according to legend, he banished the snakes from Ireland. Slithering into the sea, they all drowned. To this day, there are no snakes in Ireland.”

Shaking my head, I gave Anya a doubtful look and took a piece of soda bread. “I’m sure the fairies must have helped because I’ve never known a human to have that kind of magic.”

Laughing, Ms. Claus remarked, “He used a power called ‘feth fiada’ (a magical mist or veil) to transform himself and his companion into wild deer so that they could escape an ambush on their way to preach at the Hill of Tara. When the enemy arrived, all they saw was a deer with a fawn walking across the fields. No fairies were involved in either situation.”

Before I could answer, the lights began to dim as Blanch stepped on a raised platform. “Did you enjoy the breakfast?” Thunderous applause and loud cheering rolled across the room. Waiting for the elves to settle down, Blanch smiled. “I knew you would,” she stated, rubbing her hands together in excitement. “Now Ms. Claus has a story to share.”

After loud hoots and shouting, the room went silent, for the elves loved a good story.

“Long ago in Ireland, the Banshee, unusual fairy women, flew freely through the air, especially at night.” As Ms. Claus continued, she described their dark flowing hair, sunken eyes, pale skin and red robes. “Their powerful screams made everyone afraid, for they predicted death.”

Waiting for the room to settle down, Anya continued. “On a December night, young Rowan, one of my ancestors, heard a horrible sound, and curious, he opened the window to see the awful sight of a Banshee. Determined to save his family, Rowan knew that a weapon of pure gold could hurt a Banshee and went to the shed for the three golden arrows that his grandfather had made for just that reason. Unsure what to do, he lifted the bow, placed an arrow against the string and walked outside. The piercing wails grew louder as he turned to face the Banshee. The first arrow went wide and missed the mark. Taking aim again, Rowan pointed the second arrow directly at the Banshee and fired.” Stopping the story, Anya looked around the room but said nothing.

Finally, one of the elves yelled, “What happened?”

While the others demanded an explanation, Anya smiled. “I might not be here today if it weren’t for Rowan,” she proclaimed proudly, “so of course his arrow found its mark. That Banshee didn’t stand a chance.”

As the elves stood up to cheer, I clapped my hands. “FANTASTIC,” I yelled. After my wife took a bow, she returned to our table. “I knew there was something I liked about you. What a story!”

After the cheering died down, a loud bang at the door was heard. Turning, everyone watched as an older man dressed in green and about the height of the elves suddenly appeared. “Top of the morning to you!” he called out lifting his hat. “And Ms. Claus, you tell a grand story, but we can’t be leaving these fine folk believing that only scary things happen in Ireland.”

“Don’t worry. He may be a trickster, but he is harmless.” As my wife stood up to welcome the stranger, she declared, “This is a leprechaun. And I think he has come to spread some Irish cheer.”

Bowing, he tipped his hat. “Right you are Ms. Claus. Though you are supposed to find this pot of gold,” he said pointing to what was in front of him, “at the end of a rainbow, that can’t happen with your long days of darkness. However, I decided to bring my pot with me.” Reaching down, he grabbed the gold coins and began throwing them in the direction of the elves. “Happy St. Patrick’s Day!” he exclaimed.

The elves ran around the hall scooping up as many gold pieces as possible while the wily leprechaun continued to walk and toss the coins. “If you grab him,” screamed Blanch, “he has to grant you a wish.”

Looking in the direction of the little man in green, several elves scampered towards the door to trap him, but before they could reach it, the sly leprechaun laughed loudly. “That will never happen.” As a huge ball of smoke surrounded him, the man disappeared.

Startled, the elves tried to look for him once the smoke had faded. Then they heard Lyra yell, “These aren’t gold coins; they are chocolate.”

“CHOCOLATE!” exclaimed my wife as she peeled off the foil. “So much better than real gold coins. What a delicious way to end our Irish breakfast.”

“Well, my dear, you should know,” I remarked grinning. “You’re not called the Queen of Chocolate for nothing.” Giving her a hug, I sat down to enjoy this special treat. “Who knew that St Patrick’s Day could be so much fun.”

I hope you enjoyed today’s story. I will post another one on December 15th. If you have any comments or if there is something you would like me to tell you about, please feel free to leave me a comment. Until next week . . .