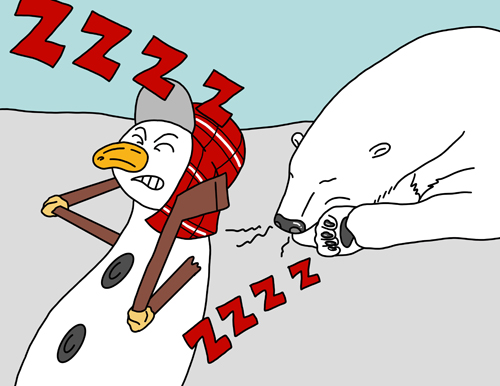 As I walked out of the tunnel from our North Pole Village, I saw Nippy, Frosty the Snowman’s cousin. Noticing a tired look on his face, I asked, “Are you okay Nippy? You don’t look so good today. Are you not feeling well?”

Yawning and stretching his arms, Nippy explained, “Good morning Santa. Feeling fine, but I did not get much sleep. You see, when I fell asleep on a snow bank last night, bits of snow kept falling on my face.”

“That had to be annoying, but I would think you are accustomed to a snowfall, so why would that bother you?” I wondered aloud.

“You’re right. That really didn’t bother me, but the shaking ground did. Now that I think about it,” he answered nodding his head, “that’s probably what caused the snow to fall on me.”

“That makes sense, but what about the ground?” I asked. “I didn’t feel anything last night.”

“I could not tell, but I did notice the ground trembling more and more as I began walking around to find a place to sleep,” Nippy informed me.

“Yes, the ice even started spiking up into the air. Look around, Santa,” he instructed as he turned and pointed to the ice spikes around us. “A couple times they sprang up right in front of me, and I fell.”

“That’s terrible!” I exclaimed, walking over towards the icy spikes. As I examined them, they appeared older as if they had been here for a while. “That’s strange,” I muttered to myself. Turning to face Nippy, I gave him an odd look and asked, “Did you figure out what it was?”

Without answering my question Nippy continued. “In addition to the ground moving, I began to hear loud noises like thunder that rolled across the area.”

“Like thunder?” I asked knowing how rare that happens at the North Pole. “Did anyone in the village hear it?”

“I don’t know,” he admitted. “I haven’t talked to anyone except you, but I don’t see how they could have missed it. I even tried stuffing my ear flaps into my ears to lessen the noise, but that did not work.”

“Well that is strange,” I remarked. “If this is true, I wonder if we are in for a severe change in weather and need to warn everyone to stay inside till it blows over.”

As if Nippy did not hear me, he continued, “It was worse than a freight train speeding past. I just kept walking, hoping that I would eventually get away from it and be able to sleep.”

“I can understand your need to sleep,” I remarked sympathetically, “ but if these strange weather patterns continue, you and I need to warn the village, so let’s….”

Ignoring me for the third time, Nippy continued to tell his story and blurted out, “Wait a minute Santa, you haven’t heard it all. It got worse as the night went on.”

“Calm down Nippy,” I said, reaching over to pat him on the back. “I’m listening. What happened next?”

Taking a deep breath, Nippy continued, “Well after several hours of trying to get away from the shaking and noise, I decided to see if I could find what was causing it.”

As I waited for Nippy to continue, his eyes took on a strange look. “The closer I got to the noise,” he stated, “the worse it got. At one point I was walking across an ice sheet, when the quaking caused the ice to split open right under me, and I found myself in the water below it. Swimming to the edge of the ice and using my hockey stick arms, I managed to dig into the ice and pull myself out.”

“That’s horrible Nippy. I can’t imagine how terrified you must have been.” At this point, I knew that it would be necessary to send out a warning to all the villagers. “I’m worried Nippy. We need to get back to my headquarters and ….”

Paying no attention to the worry on my face, Nippy continued. “Santa, you need all the details, so I’ll be quick. Just when I thought I could not bear it anymore, I came over a snow bank and could see the source of all this trouble.” Nippy folded his hockey stick arms and stopped.

“What!” I demanded. As Nippy turned his head away from me, I thought I noticed a slight grin on his face. “This is serious. We need to know so that the villagers can be prepared if it happens again.”

“Well when I came over the bank of snow, right there at the bottom I found the source of all my troubles, a 950-pound polar bear, sound asleep.”

“A polar bear! You must be joking?”

“I would never kid you Santa. That is when I realized that Polar Pete snores! Very loudly!”

“I would have never thought Polar Pete’s snoring could . . . “ I began, as I noticed Nippy was now laughing uncontrollably.

“You should see the look on your face Santa!” Nippy exclaimed.

“You got me,” I conceded and could feel my face turning the color of my suit. “This was just another one of your funny stories wasn’t it?”

“Well Pete does snore pretty loud, but not as loud as I explained it. Once again you fell for one of my stories.”

Putting my arm around Nippy, I said, “One of these days someone is going to get you with a tall tale and then I will get to laugh.”

As the two of us made our way toward the village, I was already thinking of a tall tale I could tell him.

To read more about Nippy please check out: Santa’s Newest Friends, which was posted on July 8, 2019; Homesick Penguins, which posted on June 8, 2020