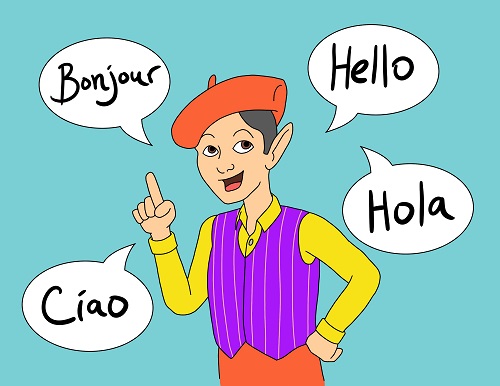 After finishing lunch, I headed over to the mail room. This is where elves, under the watchful eye of Ms. Claus and myself, translate the letters of children from all over the world.

The mail sleighs had just returned from collecting letters, and entering the room, I heard several elves already reading them in various languages. To most people it would sound confusing, but to me, it was music to my ears. I knew that when they finished reading the letters, I would get some good notes about what the children want for Christmas.

My wife Anya, was sitting at the desk in the back corner. Approaching her I said, “Looks like another busy day. It is so great to have elves that can translate all the different languages. I wish I could take them all with me when I travel so I always have someone who understands the local languages.”

“That would be nice.” Anya said. She stood up and walked around her desk to stand next to me and continued, “You know, I heard there was a new elf attending the Elf School, that knows several languages. Maybe you should check with Lector, the language teacher.”

“That sounds like a great idea. It sure would be nice to have someone like that. You don’t know what the new elf’s name is do you?”

“I’m not sure. Seems it started with a ‘B.’ Bagel maybe? Sorry I just can’t remember.”

“No problem. I’m sure Lector will know. If you don’t need me, I’d like to go over and check it out. Do you mind?”

“We’ve got this under control.”

I entered the school and turned down the hall towards Lector’s office. As I approached, he was coming out and began walking toward me. “Lector, how are you today,” I said.

“I’m doing well Santa. What brings you over here?”

“Ms. Claus was telling me about a new elf that speaks many languages, and I was wonder . . . “

“What?” I said with a quizzical look.

“The elf you are looking for. His name is Babble. I was actually going to call you about him. When I realized his talent, I thought you would have a place for him. Would you like to meet him?”

“I’m on my way to teach a class right now, and I’m afraid I don’t have time to introduce you to him. Do you want to come back when I’m free?”

“I don’t think that’s necessary. Can you tell me where I can find him?”

Looking at his watch he said, “He should be in the library right now. I saw him earlier and he is wearing a purple vest with thin pink lines, and a yellow shirt. But the sure give-away will be his hat. He likes to wear an orange French Beret, instead of the traditional elf hat.”

It must have taken me all of three seconds to find Babble among the 35 or 40 elves in the library. Walking up to the table where he was studying, I said, “Excuse me, but are you Babble?”

Sitting in the chair on the opposite side of the desk I said, “I hear that you can speak several languages. Is that true?”

“It is. I have traveled to many places and just seem to have the knack for learning languages.”

“Can you say ‘Merry Christmas to all, and to all a Good Night’ in Spanish?”

“Feliz Navidad a todos, y a todos una buena noche,” he responded with no hesitation.

“That’s amazing,” I said. Leaning back in the chair, I continued, “Ms. Claus and I are always looking for elves to help translate the letters we get from all over the world. There are also times when I travel to check up on the children, and could use someone like you to help translate. Do you think you’d be like to do something like that?”

“You bet I would! That sounds like a great job!”

“Then I will talk to Bernard, my head elf, and when you finish your studies at school, I will have him assign you to the mail room. When I travel and need help with local languages, you can go with me.”

We stood up and shook hands on it. I turned to leave and smiled knowing that I found an elf with a talent I really needed. As I was about to walk out the door, I heard Babble say, “Thanks for giving me the chance to use my talent to help you, Santa!”

I turned, and with a smile on my face, waved to him and said, “I’m looking forward to it!”

2 Replies to “Translating Letters for Santa”