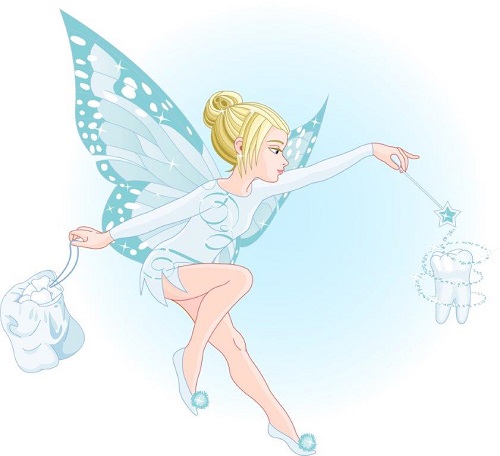 Entering the elves’ recreation room, I looked for Bernard thinking he might be taking a break. Not seeing him, I turned to leave when I heard, “Santa can we ask you a question?”

At a table in the back of the room, I noticed Rudy, Tiny, and Toto motioning for me to sit with them. Since completing their first year as Scout Elves last Christmas, the three had become good friends. “What can I do for you fine elves?” I asked as I walked up to the table.

Rudy stood up and pulled an empty chair out so I could sit down. “Santa, as you know we are new Scout Elves and were wondering about this Tooth Fairy we have heard so much about while visiting with the children,” he began.

Taking my seat, I chuckled and repeated, “The Tooth Fairy. What would you like to know?”

Rudy sat back in his chair, and began, “Being from Lapland, Finland, the Scandinavian tradition is that when children lose their baby teeth, they or a family member will wear it like a necklace for good luck.”

“You’re right and many countries have similar traditions.”

“Well Santa,” Rudy began suspiciously, “We understand that in the United States a Tooth Fairy arrives at night after the children fall asleep and takes the children’s baby teeth when they fall out…”

“And pay the child for the tooth!” Toto broke in as he finished Rudy’s explanation. Shrugging his shoulders, he added, “What’s up with that?”

“Ho Ho Ho,” I laughed. “That’s no different than the Vikings who would also pay for a child’s tooth to bring them good luck in battle.”

Tiny leaned back in his chair and shook his head. “That Viking tradition goes back more than 500 years, but Santa it is the Tooth Fairy that we are having an issue with.”

I placed my forearms on the table and clasping my hands remarked, “I’m not sure I know what you mean.”

“Working for you at the North Pole, we are all familiar with the Snow Fairies and their Magic Fairy Dust that you use to make Christmas happen, but we have never heard of this Tooth Fairy,” Tiny remarked.

“Have you ever met the Tooth Fairy, Santa?” Rudy asked.

“I have not,” I answered. “They have never come to visit us here at the North Pole.”

Folding his arms on his chest, Tiny burst out, “Then how do you know the Tooth Fairy exists?”

“That’s a fair question,” I responded. “First, I asked Gwendolen, the Queen of the Snow Fairies, about her, and she confirmed that she exists and lives in the lush forests of Iceland.”

While the three young Scout Elves thought about what I had just told them, I continued. “To this day, other than the Snow Fairies, the only other person I know who has seen her is a little boy named Max.”

“How did he manage that when even you have not?” Rudy demanded to know.

“Well, if you knew Max, you would understand. He was a very inquisitive, little boy who loved to take things apart so he could figure out how they worked.” I stroked my beard and after a short pause continued. “It was several years ago now, and Max was eight. I remember his Scout Elf telling me that Max would brush his teeth every morning after breakfast and in the evening before bedtime.”

“That’s nice,” Toto said impatiently, “but what about the Tooth Fairy?”

“Sorry Santa,” Toto replied as he dropped his head. “I’ll try to be more patient.”

“I appreciate that,” I said and continued.  “Well, one morning while brushing his teeth Max decided to count them. There were 20 all total, and he was surprised that one was wiggly. His mom explained that these were his baby teeth that would eventually be replaced by his forever teeth. Later that day, it fell out. After he told her what had happened, she explained how the Tooth Fairy would come that night and give him a reward if he placed his baby tooth under his pillow.”

“A reward,” yelled Rudy, “under a pillow? That makes no sense. Any reward would have to be pretty small to fit underneath a pillow with someone sleeping.”

“Yeah!” exclaimed Tiny. “Wouldn’t a child wake up and see the Tooth Fairy? What’s the surprise in that?”

“You three need to use some patience so that I can finish without any more interruptions,” I said calmly. Smiling, I added, “Do you think you can do that?”

“I can understand your confusion, but most often the Tooth Fairy leaves money for a tooth. Max liked that idea and was excited when he put his tooth under his pillow. But before he did so,” I continued, “Max tied some dental floss around his finger and the other end around his tooth.  That way when the Tooth Fairy came to take it away, she would wake him up.”

Though the three elves were dying to ask me questions, they remained patient. “So… do you think he saw the fairy?”

“YESSS!” the elves blurted out before putting their hands over their mouths.

“Well, you’re right. A few hours later Max was awakened by a tug on his little finger, and when he opened one eye, he saw a tiny fairy, about the size of a butterfly, hovering over his pillow. She was trying to untie his tooth. When he offered to help, the Tooth Fairy accepted. Sitting up in bed, he untied the floss from his tooth and handed it to her. She took it and tucked the tooth inside the pocket of her dress. Before Max could respond she disappeared into the darkness of the night. Finishing my story, I added, “To this day, Max is the only one I know of that has been able to actually see the Tooth Fairy.”

Tiny scratched his head and wondered out loud, “If Max could figure out a way to catch the Tooth Fairy, then I bet he was able to catch you as well.”

With a big belly laugh I responded, “I have been caught by many young boys and girls over the centuries, but none of them remember.”

“How can that be?” the elves asked in unison.

“Because I have my Magic White Feather from the Ivory Gull that lives at the North Pole, but that’s a story for another day.” Pushing my chair back from the table I got up. “Now if you are satisfied with the Tooth Fairy, I must find Bernard so we can get some work done.”

To read about the white feather please check out:
The White Feather, which was posted on May 18, 2020