The Story Of Elves 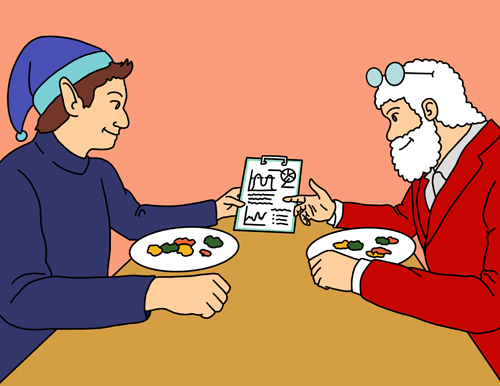 Bernard and I sat at a table in the middle of the dining room. As elves do in order to maintain their high level of energy, Bernard was having a healthy lunch of chicken salad on a bed of lettuce, steamed broccoli, and a small bowl of mixed fruits. I chose a grilled cheese sandwich, potato chips, and an apple.

“You know Santa, you really should eat more vegetables and less of those potato chips and processed foods,” Bernard informed me.

“You sound like Ms. Claus. I’m doing better than I used to, but I just have this weakness for what I like to call ‘comfort’ foods.”

“I’m just looking out for you. I don’t think we could continue our Christmas mission if something ever happened to you.”

“Thanks,” I responded putting my napkin on my lap. “But I could never do this without you and all the elves either. Remember when I visited Lapland, Finland, hundreds of years ago, looking for reindeer to pull my sleigh? The last thing I expected was to meet you and the other elves on Korvatunturi (kor‧va‧tun‧tu‧ri) Mountain.”

Bernard nodded as he recalled that time long ago. “Your reputation for gift giving was well known around the world. So, when we heard you were coming to find magical reindeer, we knew we had to meet you, and hoped that you would allow us to help.” Bernard looked around the dining hall at all the elves. “You know each and every elf here would not want to be anywhere else.”

Looking at my head elf, I smiled, “Good to know.” I leaned forward putting my elbows on the table, and thought about the elves and added, “I would have never been able to keep up with the demand without them.”

As Bernard and I focused on eating, I thought about my first encounter with the elves. Similar to humans, they were no taller than about three feet, with large pointed ears. Later I learned that their ears allowed them to detect the slightest noise and to be able to pin-point what they heard and where it came from. Their hearing came in handy many times, especially in finding issues with my sleigh as well as overhearing everything that was said in children’s homes, even if they were whispering in another room.

As I slowly finished my lunch, I remember being impressed by these energy packed beings. Often feisty, fidgety and nervous, I learned to use these traits to my advantage. Unable to sit still for too long, I watched as they tinkered around to see what they could create. Smiling, I recalled one particular elf. “Bernard,” I asked, “do you remember how shortly after the elves arrived at the North Pole, one of them, Hanfin I think, took an old clock apart?”

Bernard laughed and almost choked on a piece of fruit. “You were so upset at first as Hanfin examined how it worked. Putting it back together, he figured out how to apply what he learned to toys. Do you remember what he then created for you?”

“You bet I do,” I answered grinning. “The next day, he came into the toy shop and showed me the mechanical train that could run on its own after being wound up instead of having to be pulled. I was impressed.”

“I agree.” Nodding, I added, “We were in need of elf creativity, and they could not have come at a better time. I was struggling to keep up with the growing number of children and homes I had to visit. Not only was I trying to find a way to get to all the homes faster with the strongest reindeer, but Ms. Claus and I were worried about keeping up with the increased number of toys I required for Christmas.”

“They say things happen for a reason, and our meeting certainly proves that!”

Sitting back in my chair as Bernard continued eating, I thought about some of the stories I had heard about elves. “You know Bernard,” I remarked thoughtfully, “it’s a good thing I did not listen to all the rumors about elves.”

A quizzical look overcame Bernard’s face as he paused from eating his broccoli. “What rumors are you talking about Santa?”

“As I recall, Scandinavian legends portrayed elves as downright naughty, if not outright evil and nasty. Why I even had one person tell me that if you were naughty, an elf would sit on your head while you dreamed, turning the dream into a nightmare!”

“That’s a bit harsh,” Bernard said miffed. “You do realize the truth was that the elves reacted to what was going on with the family in a house.” Spearing a piece of pineapple with his fork, he shook it in the air at me. “If they were good, we protected them from evil. However, if they were naughty, we would play tricks on them, but we never sat on any child’s head.”

I chuckled a bit. “Well, true or not, that’s what inspired me to start keeping the Nice and Naughty List. Since then if a child is good, they are rewarded at Christmas; if they are naughty, I don’t leave them as much, and sometimes I won’t leave anything for them.”

“And the Scout Elves (Elf on a Shelf) are still helping with that today,” Bernard asserted as he finished his lunch.

“Yes, I’m not sure what I would do without them. They keep me informed if the children are behaving and obeying their parents as well as any updates I need to make to their wish list. However, there are times when I’d like to see the elves behave better while in the children’s homes.”

“Santa, you know they are just using their energy and magical powers to have some fun. Controlling what the children see and experience makes being watched more fun for the children as well.”

“I suppose you are right. But I have to tell you, some of the stories the children have told me about their Scout Elves borders on being naughty. Like the time Tiny poured flour on the table and then made Snow angels. Or the time Scarfy took a bubble bath in mini marshmallows.”

“Though I admit that their ways of having fun are questionable, they always come through for you with the information you need. You know all the good deeds of the children as well as anything they need to improve on. Not to mention, the elves always know exactly what the children want for Christmas.”

I looked around to make sure none of the elves were listening in on our conversation, and whispered, “Bernard, just between you and me, I enjoy hearing the stories about the Scout Elves. I like their style and hope they remain young at heart and continue to enjoy life. They deserve it for all the hard work they put into making Christmas special for all the children.”

“Your secret is safe with me Santa,” Bernard replied winking.

To read more about Elf Education please check out: Continuing Education for Elves, which was posted on January 27, 2020