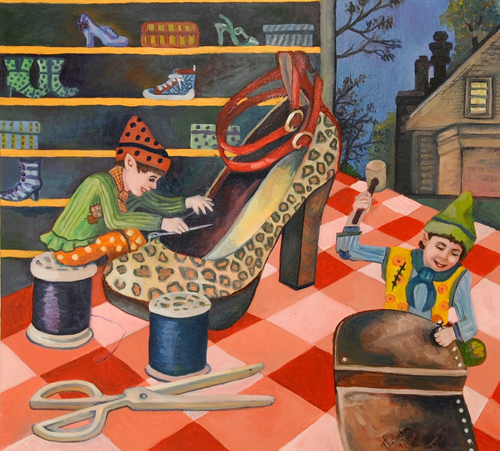 Bootsie knocked on my office door. Pushing it open, he asked, “Santa do you have a few minutes?”

“I always have time for my favorite bootmaker,” I said as I waved Bootsie to come in. “Who are your friends? I don’t believe I’ve seen them around the village.”

As the three elves entered, Bootsie introduced the new elves. “When I recently visited family and friends in Lapland, I was introduced to Soledad and Lacey,” he said pointing to each one. “They are from Tulppio in Lapland, Finland.”

“It’s a pleasure to meet you both. Have a seat,” I said pointing to the couch beside my chair. “What brings you to the North Pole?”

“Well Santa, as you know,” Bootsie began, “I make the shoes and boots for all the elves as well as the harnesses for the reindeer teams. This year,” he continued hesitantly, “I noticed that I was struggling to keep up and thought…”

“I also noticed that,” I interrupted. “Do you want to train Soledad and Lacey to help you?”

“That’s the best part, Santa,” Bootsie responded as he sat on the edge of the couch. “They are skilled shoemakers and ready to start working right away.”

“That’s great Bootsie, but you know, having a skill is just part of being one of my elves. How do I know they have the heart to be one?”

Bootsie turned to face the new elves and said, “Why don’t you share the story you told me the other day?”

Soledad looked at Lacey and gave her a nod, and with that Lacey began. “There was a shoemaker back in Tulppio a few years ago who had fallen on hard times.”

“When we learned about his problems, Soledad and I decided we needed to step in and help,” Lacey continued. “That night after the shoemaker cut the last piece of fine leather to make a pair of shoes in the morning, we slipped into his workshop unnoticed.”

“We thought,” explained Soledad, “if we made a perfect pair of shoes for him, he would have no problem selling the shoes for the best price.”

“The next morning, we watched through the window, and when the couple went into the workshop, they were shocked to find a perfectly finished pair of shoes instead of the leather pieces. Before either could say a word, a gentleman came into the shop.”

“He was so impressed with the craftsmanship and fit of the shoes, he paid the cobbler twice the price and went on his way. Afraid to even talk about his good fortune, the shoemaker went out right away and bought enough leather to make two more pairs of shoes.”

Lacey nodded in agreement with what her partner had just said, and added, “Needless to say, the shoemaker once again cut the leather so that he could make the shoes when he awoke in the morning.”

Bouncing on the couch with excitement, Soledad interrupted, “We were happy that the cobbler was able to sell them for twice the price, so we again slipped into his shop and made the shoes for him.”

“The next morning, we watched again and saw the stunned, yet happy looks on the couples’ faces when they realized that both pairs of shoes had already been made,” Lacey said as she tried to duplicate their expressions.

“Just like the day before,” continued Soledad, “the first customers to see the shoes immediately bought them and paid twice the price. Again, the cobbler went out and bought more leather for even more shoes. This went on for several days. Whatever the shoemaker cut out in the evening, we made into shoes during the night.”

“Everyone seemed to be happy,” Lacey began. “We were glad to help someone, the cobbler and his wife avoided the poorhouse, and the customers who bought shoes from the shop enjoyed their comfort and style.”

When Lacey paused, Soledad grinned and said, “This is where the story takes a strange twist. Shortly before Christmas, the couple decided to stay up all night to see who was making the shoes.”

“Once again, Soledad and I returned to the shop,” Lacey remarked in a hushed voice. “Climbing through the window, we stopped to be sure no one heard us. After looking around the quiet shop, we felt certain it was safe to begin working.”

“We do that often while working,” Soledad added. “You never know if someone will hear the sound of our hammering.”

“Not to mention our humming and whistling,” Lacey chuckled. “We made quite a few shoes that night, including sturdy riding boots, delicate slippers, feather-light dancing shoes and heavy clogs for work. But not once did we suspect that the cobbler and his wife were watching us,” she added.

“How did you know they were hiding and watching you?” I asked.

Soledad gave his jacket a little tug and said, “Well Santa, we were more interested in helping others than doing things for ourselves … and uh … well we probably looked pretty shabby. At that time, our clothes were worn and dirty, and even with the cold, our coats were so thin that the icy wind cut right through them. Even our shoes were torn.”

After a short pause, Lacey explained, “We must have looked a sight because the next night instead of the leather cut and ready to be made into shoes, we found a warm shirt, coat, pants, and a pair of knit stockings for each of us. On top of that, the cobbler made us a pair of fine shoes.”

Sitting on the edge of my chair, I shook my head. “Amazing! What did you do?”

“At first we were too astonished to move,” Soledad stated. “Then we both took a long time looking around the room and into the hallway, trying to see where the couple could possibly be hiding. We finally gave up and after admiring our new warm clothes, we put them on,” Soledad said as he gave himself a bear hug.

Lacey jumped to her feet and began dancing around my office. “We leaped and bounced around the room, singing about our new found gifts.”

“Now we’re elves so fine to see,
No longer unsightly we will be.”

“That experience,” Lacey continued as she stopped dancing. “reminded both of us why we do what we do. Helping people in need and making them feel good about themselves is just the right thing to do.”

“That’s right Santa,” Soledad remarked proudly, “but it’s especially rewarding when you realize that those we help will take the time to do the same for others.”

Standing up, I announced, “That story was fantastic. I like your attitudes.” Wiping a small tear from my cheek, I looked at Bootsie and said, “There is no doubt that Soledad and Lacey both have the qualities we strive for at the North Pole, and if you are satisfied with their skills, then . . .”

Before I could say another word, Lacey and Soledad ran over and gave me the best hug. Completing the circle of giving, I smiled and reached down to hug them in return. Kind and helpful attitudes truly enhanced the spirit of giving.

To read more about Bootsie please check out: No More Snowshoes, which was posted on March 23, 2020;

Illustration from the Collection by Tina Rath