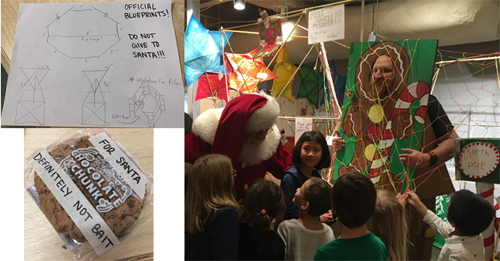 I always look forward to relaxing after the hectic Christmas preparations. It gives me time to unwind with Ms. Claus and share my adventures during the time leading up to my delivery of presents on Christmas Eve.

One evening while Ms. Claus and I sat before a roaring fire drinking hot chocolate, I began telling her about the children I had met and my adventures at Holiday Junction. “You’re not going to believe this Anya,” I exclaimed, “but I was almost trapped by some scheming helpers at Holiday Junction.”

“Now who would want to trap you, Santa?” she asked, “especially when you deliver gifts on Christmas. I can’t imagine who would risk getting on the naughty list.” Pausing to take a sip of hot chocolate, she turned and smiled. “Tell me, did you get caught or did you manage to escape?” Laughing, she added, “I don’t believe you could ever have someone outwit you.”

Slipping my arm around her shoulders to give her a hug, I answered quietly. “This time, I was almost outwitted, so I have lots to tell.”

When Ben and his younger brother Jacob came running up to me all excited, I knew something was wrong. Having just talked to them earlier, I asked, “Did you forget to tell me something you wanted for Christmas?”

“No, but someone is planning on trapping you today,” they said breathlessly, “and we came to warn you that……”

“Whoa, slow down and take a breath,” I suggested, thinking that this must be a joke.

“We were just at Kids Space in the Children’s Museum,” explained Ben, “when we heard that someone was setting a trap for you.”

Breaking in, Jacob added, “We wanted to let you know that they are planning on tricking you so that you can’t make your deliveries tonight!”

“What? Who would want to do that?” I asked a little confused.

“Jacob and I aren’t sure,” said Ben, “but we heard that someone found out that he was on the Naughty List and wouldn’t get any presents tonight, so if he wasn’t getting presents, he didn’t want anyone to get any.”

“Well that worries me. I never tell children they are on the Naughty List. They find out Christmas morning, so how do they know?” As I stroked my beard, I realized I needed to know what the plan was. “You did not happen to see the plans, did you?”

“Not really,” said Jacob. Looking over at his mom, he added, “But Mom took a video when we were in Kids Space, and they show something weird.”

As the boys’ mom walked over to me and pulled up her pictures I immediately knew what Jacob meant. Three workers were gathered in a corner of Kids Space where children were playing with Magna-Tiles and Legos. I could see them whispering while pointing to a large piece of paper. I stopped the video and tried to enlarge the picture, but it didn’t work. However, I recognized Graham and Bill, who wanted to catch me in his house last year.

“Well I am very thankful that you told me about this,” I said as I gave them both a hug. “I will have to be careful today.”

I continued talking with the children who wanted to make last minute changes to their list, when Samantha came up to me with her camera. Holding it out for me to look at the picture on it, she asked, “Do you know what that is?”

“Is this the trap I’m supposed to get caught in?”

“It is,” she responded. With urgency in her voice she continued, “They think it will be completed around 1:30 and plan on catching you in it!”

“I didn’t think they were serious, but now that you’ve shown me this …” I tapped my temple as I studied the picture of the trap, and said, “Looks like the key is the cookie on a string there in the center.”

“You’re right Santa. They have the cookie tied to a string, so that when you take the cookie a net will fall on you.”

“Humm, so I probably need a pair of scissors to cut the cookie down so I don’t pull the string. I think that will work!”

“That won’t work,” someone said from behind Samantha. “There is a backup release. Once you’re inside the trap you won’t be able to get out,” the voice continued.

As I leaned to the left to look around Samantha, I could hardly believe who I saw. “Graham?” Somewhat confused, I asked, “What are you doing here?”

“Santa, I got to thinking. I could not think of anything I have done that would get me on the Naughty List,” he explained.

“You’re right. You are not on the Naughty List.”

“But if I helped Bill trap you, I would almost certainly end up there. So, I want to help you Santa.”

“I appreciate that, but what can we do?”

“I was thinking that I could take the cookie out of the trap and tell Bill to hang a new one up and set the trap for you. Then while he is putting the cookie in the trap, I will spring it on him using the backup release.”

“Are you sure it will work?”

“Absolutely. Send Nicole, your social director, into Kids Space and that will be my signal to get Bill in the trap. Then I’ll spring the trap when you walk in.”

At 1:30 sharp, I walked into Kids Space with a robust “Ho Ho Ho.” And the children all cheered when the trap’s net fell on Bill, who tried to disguise himself as a gingerbread man. I approached the trap and all Bill could say was, “The cookie is definitely not bait. It’s not a trap.”

I gave Graham a thumbs up for his work, and turned to the children. “So, what do you think we should do with this gingerbread impersonator?”

“Naughty List,” they all chanted. All but one that is. To my left Joshua said, “I think he should get a second chance.”

“You think he should be on the Nice List?”

“I just think that we all make mistakes, and we all deserve a second chance, and he is not any different than the rest of us.”

Turning to all the children again, I said, “Joshua thinks Bill deserves a second chance and should not be put on the Naughty List. What do you all think?”

All the children began staring at each other, as if looking for someone to decide Bill’s fate, when Joshua spoke out. “If you had done something bad would you want a second chance to make it right?”

I began to see all the children nod in agreement with Josh, I turned to Bill and told him, “I’m really disappointed that you would risk all the children not having Christmas by trapping me, but Josh is right. Down deep inside I believe you are a good person, and I am sure you will not try anything like this again. So, I forgive you and believe in you.”

“I am telling you Anya,” I said shaking my head as I finished the story, “all the children cheered and Josh smiled brightly. I handed the cookie ‘bait’ to him and said, ‘Thank you for standing up for Bill. You have shown kindness, compassion, and maturity. I hope you stay true to who you are and always follow your heart.’”

“What a wonderful thing to say Santa,” responded Ms. Claus. “Josh sounds like a special person who understands people better than most adults. I’m sure your compliment meant a lot to him.”

Turning to face my wife, I responded softly. “Anya, children touch my heart because of the innocence, honesty, and love they reveal. I am especially proud of those who stand up for others and believe in second chances. Besides,” I laughed, “it’s one more year when I have outwitted those who want to trick me, but this time I had the help of kid power.”

One Reply to “The Santa Trap”