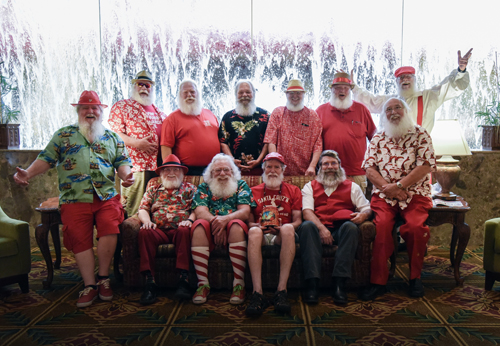 I had just entered the hotel with some of my J.A.T.S. (Jolly Assistants To Santa) Corp for their quarterly training session. Looking around the lobby, I noticed several children staring at us. As we drifted towards our meeting room, a few of my Corps members walked over to them and got down on one knee to talk with them.

“Does that bother you?” Santa Joe asked.

“Not at all. I find it encouraging that the J.A.T.S. feel comfortable representing me, even when I’m with them.”

Wandering through the lobby, one of my helpers, Santa Stan, moved on from talking with Molly, and as she passed me, I gave a little wave, winked, and said, “Good morning.”

“You’re not the real Santa,” she responded with a confident voice.

I heard Joe gasp, having never heard anyone say that to me before. “I’m not? How do you know?”

“I just talked with the real Santa. He told me he was the real one, so you can’t be.”

“You’re really lucky to have met him. I hope you gave him a big hug.”

In a now excited voice the little girl responded, “I did, and he told me I was on the nice list!”

As we continued to walk through the lobby towards the meeting room, I saw a young mother bend over to talk with her son. “Nolan, there is someone else who looks like Santa,” she said pointing towards me. “Why don’t you go ask if he is the real one?”

Before Nolan could answer his mother, I approached him and held out my hand. “And how are you today young man?”

“I’m good,” he responded with a little hesitation in his voice.

“You sound like you are not too sure about that. Is there anything I can help you with?”

Gazing around the lobby at all the J.A.T.S., I turned back and nodded. “That’s a tough one. Which one do you think he is?”

“Is it that one?” he asked pointing to Santa Lou, wearing a bright shirt with Santas and reindeer printed on it and a pair of red shorts.

“You have a good eye. Would you like to meet him and say hello?”

“You bet!” Nolan cried out.

Taking Nolan’s hand, we walked over to Santa Lou.  “Santa, this little boy would like to say hi to you,” I said. As Santa Lou turned around, he smiled at Nolan. After the two began to talk, I turned and walked away.

“Confused?” As Joe nodded, I grinned. “Though we’ll cover this later in the workshop, I’ll give you a shorter version. Since many pictures and drawings of me exist and none of them are 100% accurate, everyone has an idea of what Santa should look like. It may have come from books or movies, or maybe a Santa they saw once. So I decided a long time ago to let children use their imaginations and create their own version of me.”

“But if you told him you were the real Santa, then he would know what you really look like.”

“And destroy all those wonderful images and memories he carries in his head, not a chance!  I think it is better to just let them believe in the Santa they think is real. However, there’s one thing I want all J.A.T.S.to remember.”

“What would that be, Santa?” Joe asked.

“No Santa should ever tell a child he is the Real Santa,” I sternly reminded him. “Though I think you understand why I do not admit it, I need all J.A.T.S members to realize why saying who the real Santa is can lead to problems.”

With a puzzled look, Santa Joe asked, “What problems?”

“It will lead to the children asking questions they will not be able to answer. And that can lead children to think that Santa may have lied to them.”

Though Santa Joe nodded in agreement, he still wore a confused look on his face. “OK, I get that, but I still don’t understand why you didn’t call Molly and Nolan by their names when you met them.”

“Well that’s easy,” I responded giving Joe a playful look. “Since they might already have a Santa they believe to be the real one, why would I want to spoil that? As I said earlier, I like children to create their own version of me in their minds.”

Shaking his head, Joe laughed.  “I never thought about all these things. Each time we meet like this, I learn more about how I should act when standing in for you.”

As Joe and I headed toward the meeting room, he stopped and added, “I appreciate the time you give to train me and the others. It is an honor to be part of J.A.T.S. and play Santa.”

“Thanks Joe,” I remarked putting my arm around his shoulders, “but don’t forget, when you play Santa, you also honor the spirit of Christmas, and to me that’s most important.”

One Reply to “The Real Santa”