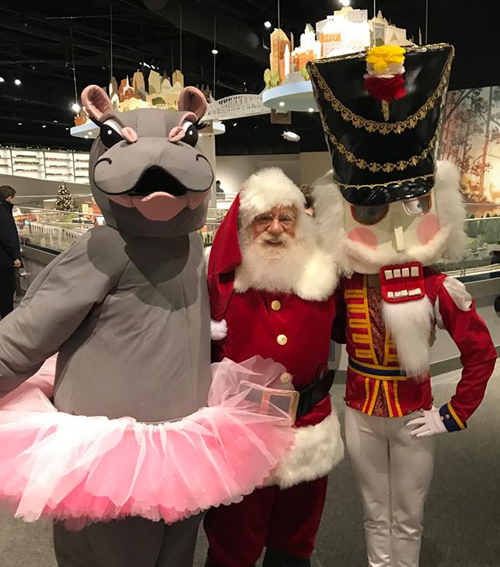 “Do you think Fiona, the hippo from the Cincinnati Zoo, will be in the Cincinnati Ballet’s Nutcracker again this year?” I asked as we strolled through the courtyard holding hands.

“I think that might have been a special thing last year. If we can find the time, I would like to see it again,” Ms. Claus responded excitedly.

“It’s a great ballet, that brings Christmas to life,” I responded.

“It’s no surprise that this has become a favorite during the Christmas Season. There is so much magic in his story, sort of like the magic You bring to the season,” Anya said as she began to dance while humming ‘The Dance of the Sugar Plum Fairy.’ “The music and dancing bring the story to life!”

Smiling, I remarked, “Maybe you should have been a dancer. You definitely have the moves.”

“Marrying the best toymaker was better than becoming a dancer!” she exclaimed. “However, I sometimes wonder if the children’s godfather in the story, may have been better than you,” Anya said grinning broadly.

“What? You don’t think I could create a life-sized doll that dances?” I responded with a laugh.

As we took a seat on a bench along the sidewalk in Santa’s Village courtyard, Anya explained, “That is why I love the Nutcracker so much. There is so much magic in the story, and the children, as well as their parents, think Christmas is magical.”

“But the best part of the story,” I said putting my arm around Ms. Claus, “is when Clara, the little girl, sneaks back down to the Christmas tree, after everyone is asleep, to check on her Nutcracker. The toys all seem to come to life and then the Mouse King and his army of mice fill the room.”

Anya chimed in. “Thankfully Clara’s Nutcracker comes to life and leads his army of toy soldiers to battle the mice, like a knight in shining armor.”

“Except the knight in shining armor, was not able to defeat the Mouse King. Clara ends up hitting the King’s head with her slipper to defeat him.”

“I love stories where the girl saves the boy, like Clara saves the Nutcracker.” Giving me a poke in the side, she added, “Kind of like I saved you from being single and lonely.” Unable to hold in her chuckle, Ms. Claus exploded into uncontrollable laughter.

Looking at her I simply replied, “Very funny.”

“You should be happy! You became my Prince, just like the Nutcracker in the story!” Squeezing my arm, and laying her head on my shoulder, she continued. “And then you took me on the most wonderful journey.”

“The Prince and I took our newfound sweethearts to the Land of Snow. For the Prince and Clara, it was a forest and dancing snowflakes that welcomed them. You, however, were greeted by little elves with pointed ears, and ice and snow as far as you could see.”

“You know I wouldn’t change that for anything in the world. But I have to admit, that when you took me into ‘Santa’s Village,’ Bernard did not even come close to the Sugar Plum Fairy in the Nutcracker story.”

“No arguments from me,” I answered as I laid my head on the top of Anya’s.  But I did take you to Neverland where you met Queen Clarion.”

“You’re right, and I very much enjoy knowing her. The truth is, that if you want to compare me to Clara and you to the Nutcracker, then I got the best deal. Clara eventually awoke from her dream with the same wooden Nutcracker that her godfather made for her. For me, it has been a wonderful on-going adventure with you!”

“One should never stop dreaming, for you never know when a dream will become reality,” Anya said as she gave me a kiss on the cheek.