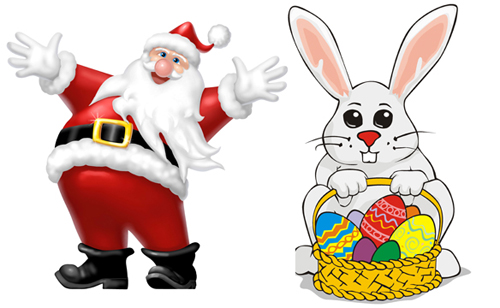 When the horn blew at the beginning of the hunt, I placed my arm around Ms. Claus’s shoulder. Sitting on a bench in the courtyard, we watch the mad dash of the elves as they began the hunt. “Do you think they will find all the eggs this year?” I remarked smiling.

“If experience tells us anything, we will be finding eggs well into the summer!” Anya laughed while watching the elves run from spot to spot, looking for Easter eggs under and behind everything they saw.

“It’s so much fun to celebrate and enjoy a special holiday where the Easter Bunny does all the work.” Feeling a lump, I put my free hand in my coat pocket and pulled out an Easter egg. “How did this get in here?” As an elf passed from my right, I handed him the egg to put in his basket.

I leaned back with Anya as the two of us watched the elves enjoy themselves. “Remember when we introduced the elves to egg-hunting several years ago?”

“I do,” recalled Anya, pulling up her legs as an elf checked under our bench. Then pointing a finger at me, she laughed. “And do you remember how the elves reacted when we tried to explain who the Easter Bunny was and his habit of hiding eggs on Easter Sunday? I thought the idea would never catch on, but here we are years later and they love it.”

Grinning, I nodded my head. “It has been fun introducing the elves to new customs, especially one that encourages them to have a great time. However, I’m a little jealous of Egbert,” I remarked watching as two elves raced towards an egg they spotted at the same time.

Anya moved forward on the bench and turned to look back at me. “Egbert? Is that the Easter Bunny’s real name?”

“Yes! Do you think I’d make something up?”

“No, but you have never mentioned his name before today.” Ms. Claus blocked another elf from checking under the bench. “Sarah, this place has already been searched.”

“Sorry Ms. Claus.” Sarah smiled and then ran towards another spot to look for eggs.

“Besides why would you be jealous of him?” Ms. Claus added. “Does Egbert have elves like you do?”

“No, he uses a multitude of highly skilled woodland creatures.”

“Woodland creatures?” Ms. Claus poked me in the ribs. “You can’t be serious.”

“I would never tease you about business. You see, Egbert has a team of chipmunks that are in charge of making the chocolate, gophers handle the egg production, and squirrels put the baskets together.”

“So,” Anya responded, “you rely on the elves to make the toys instead of woodland creatures. Egbert just uses a different system.”

“That’s true,” I mused, stroking my beard. “I guess I’m a bit envious because as I rely on the magic of Fairy dust from Neverland to make Christmas deliveries, he relies on technology.  That seems to make things run more smoothly.”

“Oh Santa,” Anya observed giving me a playful kiss.  “Egbert delivers all his baskets and eggs outside, so he does not have to get into everyone’s home. That saves him a lot of time. So, what technology does he use?”

“To start with, Egbert has an EggJet 2000 with stealth capabilities in order to get from one area to another unnoticed. Once he is in a particular area, he uses a custom-made Audi e-tron that has the most advanced GPS system. On top of that he has installed egg launchers to help him hide the eggs.”

“That’s pretty impressive! But I prefer the traditional magic that you use.” Anya patted my hand, hoping to make me feel better.

“I agree, but with so many more children and homes, I often wonder if I will have to use modern technology someday. I know Sledge and Quinten are always improving the sleigh, but …” I stopped in the middle of my thought as the elves began gathering near the center of the courtyard.

“Looks like the egg hunt is coming to an end Santa,” Anya whispered as we both stood up to see who won this year’s Easter egg hunt.

“Everyone count the eggs you have found,” I announced loudly.

Once the elves finished counting, I began asking questions. “Does anyone have more than ten?” A couple dozen elves raised their hands. “More than fifteen?” Only a few hands were still in the air. “What about twenty?” Now only Tiny and Jellybean had their hands up. “How many do you have Tiny?”

“And how about you Jellybean?”

Tiny’s head dropped in disappointment, as Jellybean raised his hands in celebration.

When the elves began to leave the courtyard, Anya sat back on the bench and reminded them, “Don’t forget all of you need to share your eggs and candy.”

Nodding in agreement, the elves filed out of the courtyard as we congratulated them. Once the area was empty, Anya patted the bench next to her, indicating I should sit back down. “You know Santa, we use a lot of new technology to make the day to day operations run better as well as to improve the toys.”

“I do realize that. It’s just that the more technology continues to improve, the more everyone seems to embrace it as if it was always there.”

“Tradition means a lot to both of us,” Anya explained. “And people want to continue to honor family traditions when it comes to Christmas.” She kissed me on the cheek. “The magical traditions of Christmas night go back long before the Easter Bunny. If you changed them just to keep up with technology, I’m afraid that magic would be lost.”

“You’re right, Anya.” Giving her a hug, I quickly slipped her arm through mine. Together we left the courtyard satisfied that nothing could or even should replace the magic of Christmas.”

To read more about Sledge and Quinten working on Santa’s sleigh please check out: Santa’s Improved Sleigh, which was posted on March 16, 2020;