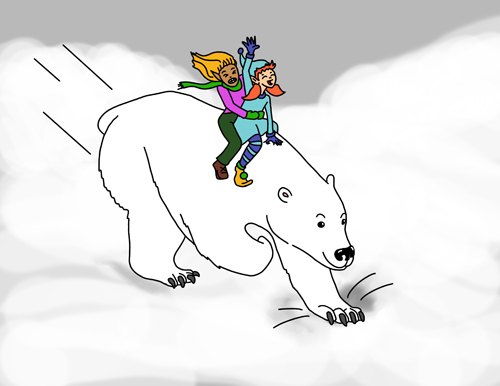 “I’m bored!” Lyra said as she sat on a bench in the village courtyard.

With her legs crossed and her elbow on her thigh to help hold her head up, Hanna replied, “I agree. The down time between end of the Christmas Season and when training classes start up for the 2020 season is really hard to get through.”

“There must be something we can do?”

“What about going outside to see if Wiggle and Waddle are around,” Hanna suggested.

Jumping up from her seat, Lyra responded, “Splendid idea! I love the penguins. Which tunnel do you think we should use?”

“They usually hang out around the south tunnel. Let’s go get our coats and gloves and then we can meet there.”

“You got it. See you in about five minutes,” Lyra said as she took off for her dorm room, not even giving Hanna a chance to respond.

A few minutes later as Hanna was walking toward the South tunnel, she saw Lyra leaning up against the wall with her arms folded and tapping her foot. “Hope you have not been waiting long?”

“It felt like forever. I just want to get out and do something with the penguins.”

“Well I’m here now. Let’s go see if we can find them,” Hanna said as she started walking down the tunnel.

When the elves walked outside there was no sign that the penguins were around. Looking around, Lyra noticed some small hills, about fifteen to twenty feet high, that were created from ice and snow, and said, “Why don’t you go over to that hill and look for them, and I’ll get on top of the one over here.”

After a few minutes, they both returned. Shrugging her shoulders, Hanna asked, “I did not see them anywhere, how about you?”

“Not a trace,” Lyra responded with sadness in her voice. “Let’s walk a bit, and maybe they will show up.”

“Okay, but I’ve never been very far from the entrance tunnel. Do you know your way around?”

“We’ll be okay, as long as we can still see the entrance,” Lyra said as she started walking to the west in search of Wiggle and Waddle.

After walking for a while, the elves came to the top of a hill and saw an area of melted ice. “Penguins like to swim. I bet they are in that lake swimming and looking for some food,” Hanna said.

“Well let’s go down and look for them.”

“But if we go down there, we will lose sight of the village entrance.”

“It will be alright. All we have to do is walk back to this hill and then we will be able to see the entrance again,” Lyra said with confidence.

“I am! Come on, let’s see if they are down there,” Lyra said grabbing Hanna’s hand.

When they reached the lake Hanna said, “I don’t see any sign of them.”

“Let’s just give it a little time. They may be swimming under water.”

Feeling a little afraid, Hanna said, “I don’t think they are here. Let’s head back. Maybe they are at the entrance now.”

“Oh, all right,” Lyra said with some disappointment in her voice.

When they turned around to find the hill they came from, both elves looked at each other fearful of what they saw.

“Which hill was it?” Hanna asked as the elves were looking back towards several hills that all looked the same.

“I think it was that one,” Lyra said pointing.

When they reached the top of the hill and looked in every direction, Hanna said, “I don’t see anything that looks like the village entrance tunnel.”

After walking to the top of several hills, they saw no entrance. Crying, Hanna said, “I knew this was a mistake! I should have never let you talk me into this. Now you have gotten us lost, and we will never find our way back home!”

I was sitting in my office talking with Birdie about getting more elves trained as Scout Elves, when there was a knock on the door. “Come on in Doheny. What can I do for you?” I said.

“I’m not really sure, but several hours ago my roommate, Lyra, came into our room, grabbed her coat and gloves and rushed out saying that she was going outside with Hanna. She has never been out there this long and I’m afraid something has happened.”

“Did you look around the village for them?”

“I’ve looked everywhere, and no one I talked to has seen either of them for hours.”

Pressing the intercom button, I said, “Telsa, this is Santa. I need you to find Bernard and tell him to meet me at the south tunnel right away. Tell him it’s an emergency and to bring his coat.”

“Right away Santa,” Telsa replied as she disconnected the call.

Grabbing my coat, gloves, and hat, I left to meet Bernard. We both approached the tunnel at the same time, and I relayed to Bernard what Doheny had told me.

“If Lyra and Hanna have been outside for hours, we need to go out to see where they are,” Bernard said.

When we were outside, both of us began calling, “Hanna! Lyra!” but heard nothing.

About 15 minutes later, we heard the crunching of snow coming from our left. Feeling hopeful, I called out, “Hanna, Lyra, is that you?”

No sooner than I said that, Polar Pete, the largest polar bear at the North Pole, appeared. “What’s going on? I could hear the two of you yelling half way to the north entrance.”

“We fear that the elves Hanna and Lyra are lost out here somewhere.”

“Would you like me to see if I can find them for you?” Pete asked.

“That would be great! No one knows the North Pole better than you,” I responded.

“And there is not a better tracker than you either,” Bernard chimed in.

“Let me get going. Wait here, close to the entrance, in case they come back before I find them.”

Polar Pete, looking at the ground, immediately saw footprints the elves had made and began following them.

After a while the footprints disappeared because the wind blew them away. He sniffed the ground so he would know what the elves smelled like. Once he had the scent be began sniffing the air and continued his search.

After about 30 minutes Pete noticed the scent getting stronger and stronger. As he came around a small hill, he saw them. They were huddled together against a large block of ice. “Lyra, Hanna?”

Looking up at Pete, Hanna exclaimed, “Pete! We are so happy to see you!”

“Well let’s get you both back where you belong. You look exhausted. Do you think you can walk back?”

“We are pretty tired. Would it be asking too much for us to ride on your back?” Lyra asked as she stood up.

“Not a problem. Hop on up,” Pete said as he laid on the ground so they could climb on.

As Pete stood up, Hanna asked, “I didn’t think you were this big! I feel like I’m sitting on a snow hill.”

“You won’t believe this, but when I was born, I only weighed about a pound.”

“You’re a bit more than that now,” Lyra chuckled.

“I’m one of the largest polar bears and weigh about 1,200 pounds,” Pete snickered.

As Pete lumbered over a hill, Lyra asked, “How did you find us? We didn’t think anyone would.”

“Polar bears have the best sense of smell. Why, we can smell a seal that’s twenty miles away.”

As Pete approached the tunnel with the elves on his back, Bernard and I looked at each other and smiled.  “Thank you so much Pete!” we exclaimed.

As he helped the elves off Pete, Bernard asked, “What were the two of you thinking? Why would you wander so far away?”

“Looking up, Hanna said, “We were looking for Wiggle and Waddle to play with them and just got lost.”

While looking down at the ground, Lyra added, “It was my idea to go look for them. I should have known better, but I did not think we could get so lost.”

“Lyra, I don’t know what to do with you. You are always trying to do what you think is right, but somehow it always seems to turn out badly, like the red fairy dust incident, and Rudolph’s nose.”

“Santa, I think we need to get them inside so they can warm up. You can have that talk with Lyra later when she is feeling better,” Bernard stated.

“You’re right. Now is not the time. I’m just glad we have friends like Polar Pete to help us when things like this happens.” As we all turned to head down the tunnel, I looked back at Pete and said, “I can’t thank you enough for helping. We owe you a big one for this Pete.”

“You don’t owe me anything Santa. That’s just what friends do. I only hope the elves learned that the North Pole is not a good place to go exploring, if you’re not prepared.”

One Reply to “The Lost Elves”