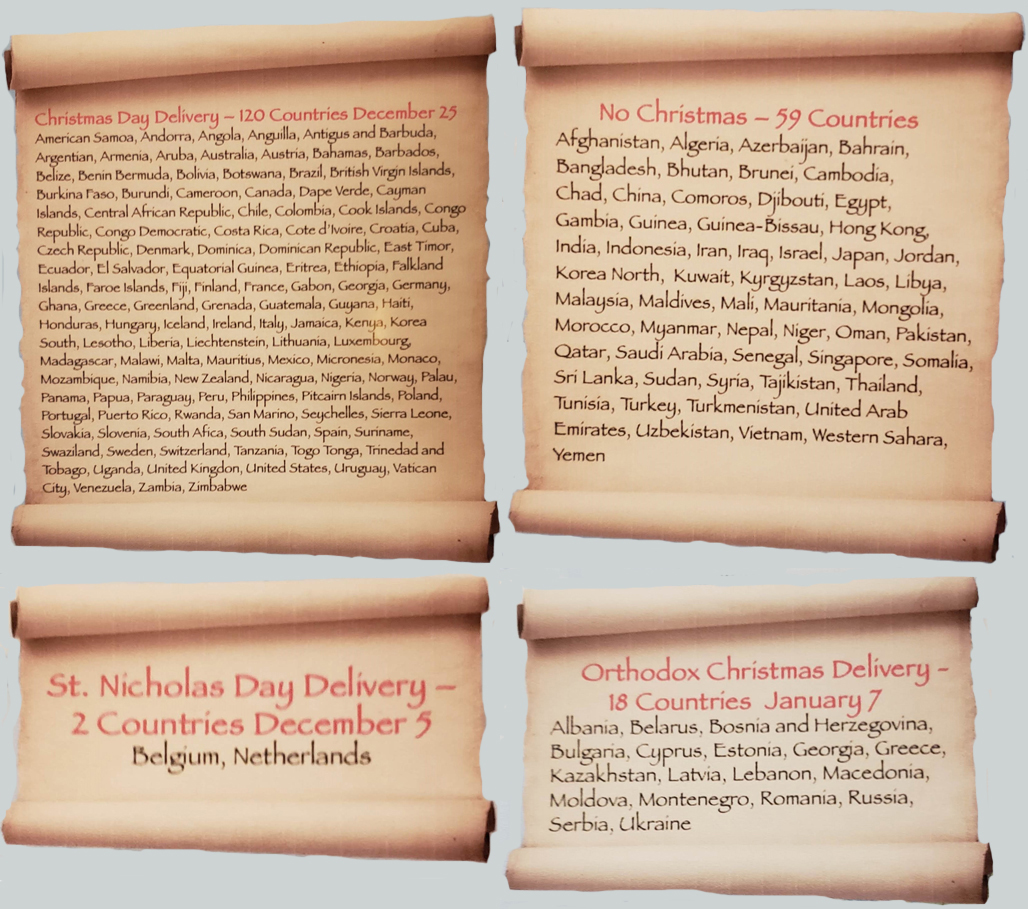 “I think the elves enjoyed their cookie and milk party on Christmas Morning,” I said to Bernard, my head elf, as we walked towards the toy shops to check on production.

“They certainly did. I could not believe that the extra cookies from your visits would be enough to give each elf three cookies. Ms. Claus seemed especially pleased.”

“I think she was just happy knowing that I did not eat all the cookies myself, as I have in the past. She is really looking out for my health these days.”

“And it seems to be paying off.” As he opened the doors to the stuffed animal shop, he continued, “You seem to have more energy after the ‘Big’ night and are ready to get the last day of deliveries completed.”

Walking into the toy shop I responded, “I do feel better after delivering the toys to the 122 countries that have already celebrated Christmas. The 18 countries that are left should be like a walk in the park.”

“I never did understand why everyone can’t celebrate Christmas on the same day.”

“I think that is part of what makes Christmas such a great holiday. Traditions and religious beliefs are different across the world from country to country. For example, the Netherlands and Belgium celebrate on Saint Nicholas Day, December 6th, and I arrive the day before as Sinterklaas.”

“Sinterklaas is Dutch for Saint Nicholas. As time went on, Sinterklass became Santa Claus. Their tradition is based on Saint Nicholas, and the children leave shoes out for me to fill, instead of hanging stockings on the fireplace. I do not arrive in my sleigh with reindeer either. In those countries, I arrive by boat with Black Pete and travel on a white horse.”

“Who is Black Pete?”

“He would be your equal, Bernard. He is like my head elf, and some legends have him taking care of the Naughty List.”

“What about the eighteen countries you deliver to on January 7th?”

“Most of these countries observe a fast of some kind before Christmas, and then have a feast on Christmas Day. But the real emphasis for these countries is on the time to reflect on their lives and enjoy the company of friends and family members.”

“But you deliver toys to the children …”

“Why of course I do,” I interrupted. “But the toys and other gifts are secondary to the gift of helping others.”

“That sounds a lot like our elves. We would rather do something for someone than give them something.”

“But let’s not forget; when you do something for someone, you are giving them a gift of love and respect.”

“If my math is right, that accounts for about,” Bernard paused as he added in his head then concluded, “140 countries.”

“But there are more countries than that.”

“Fifty-nine more to be exact. But they do not celebrate Christmas.”

“I thought everyone did. Why don’t they?”

“Christmas is a Christian celebration, and not all religions are part of Christendom. For example, the Jewish religion celebrates Hanukkah in December, which honors their ancestors who rose up against their oppressors in the second century BC. In August, the Hindu in India celebrate Ganesha Chaturthi, which is the birth of Lord Ganesha. He is the son of Lord Shiva and Goddess Parvati. To the Hindu, Lord Ganesha is the symbol of wisdom, prosperity and good fortune. He also plays an important role in Buddhism.”

“I never thought about different religions having different holiday celebrations.”

“And, not everyone follows the beliefs of a religion. Some people, like atheists and agnostics, believe the story of Christmas is a myth.”

“Santa, I don’t know how you keep up with all the different religions in the world,” he replied picking up the production report from the desk in the toy shop.

“It’s important. We need to ensure that those who celebrate Christmas get the most out of the holiday. They should rejoice in their religious beliefs while enjoying the traditional celebrations with me as Saint Nicholas, Sinterklaas, or Santa Claus.”

“And those who are not Christians?” Bernard asked.

“They should be respected for their beliefs, just like they respect others’ religion.”

Putting on my reading glasses, I continued, “Now let’s take a look at that report. We have eighteen countries left who are looking forward to their celebration, and we don’t want to disappoint the children.” 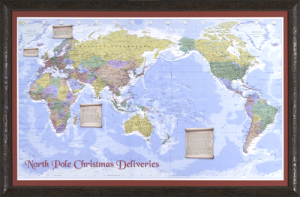