The Key to Kindness 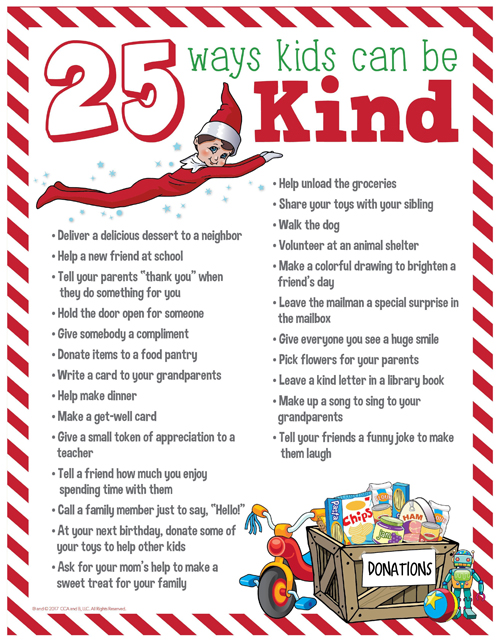 Santa Claus Is Coming to Town was playing in the background when Ms. Claus laid on the couch and placed her head on my lap. “It’s nice to be here with you in front of a fire after a hard day’s work,” I said as I placed my hand on her shoulder.

“You know Santa, we are blessed. We have so many kind and loving elves to help us make Christmas happen for all the good little boys and girls.”

“You are so right. Why, without the elves, I could never make all the toys I need, let alone get them in the sleigh and delivered.”

“Come on Santa,” Anya began catching my attention. “You know there is more to our relationship with the elves than their ability to make toys and helping you get them delivered.”

“You travel around the world all year long to check on how the children are doing. Don’t tell me you never noticed that not everyone is being kind and treating others like they would want to be treated. Why else would you have your Naughty List?”

“I do notice that, and often wonder why some people are that way.”

Rolling onto her back, Anya responded, “You hardly ever see such behavior from an elf.”

“No, you don’t. They almost always show kindness toward each other and us. I can’t remember the last time I had to open a door when an elf was around.”

“And they always say ‘Please’ when they are asking for something, and ‘Thank You’ when they get it.”

There was a knock on the door and I hollered, “Come in.”

When the door opened, Doheny stepped into the room with a tray of hot cocoa and cookies. As she placed the tray on a table she said, “I thought you two might like this to help you unwind.”

“Doheny, what made you decide to bring this for us?” Anya asked.

Grinning, Doheny explained, “Well I know how much the cocoa helps you both to relax, and when you were at dinner tonight, I could tell both of you were worn out from a busy day. I thought that if I were you, this is what I would want.”

Ms. Claus sat up on the couch and asked, “Where did you learn to put yourself in someone else’s shoes?”

Doheny shrugged her shoulders and answered, “I don’t know. I guess I saw so many other elves do it that I figured it was the right thing to do.”

“You see Santa. You get more from the elves than help with making toys and Christmas!” Anya exclaimed.

As I stroked my beard and thought about what had just been said, Doheny added, “If you need anything else just let me know,” and then turned to leave.

As Doheny closed the door, I got up to put a log on the fire and asked, “So how do I package kindness to give to people?”

Ms. Claus giggled softly and said, “Santa you know that is not possible. But you know there is plenty of kindness in children. I remember you telling me about little Justin giving you his token for a train ride at the Cincinnati Museum Center’s Holiday Junction.”

“I remember that like it was just yesterday,” I interrupted. “‘Santa,’ he said, ‘I already rode the train and would like you to give this token to another little boy or girl that might not have the money to pay for a token.’”

Moving from the couch to her chair, Anya said, “That’s just one of thousands of stories about acts of kindness by children you have told me.”

“I could tell you many more stories about children who said they had everything they wanted, and that I should give their toys to other children who don’t have as much.”

“See, there is more kindness out there than you realize, Santa. Wasn’t there a little girl that asked you for World Peace one year?”

Settling into my chair with my hot cocoa, I nodded. “Several children have asked for that in recent years, but Bridget was the most memorable. You know what she wanted the next year?”

“I don’t think you told me about Bridget,” Anya stated as she pulled a blanket over her legs.

“Well, when I saw her the next year, she insisted that instead of bringing her anything, I should give the people in nursing homes something special.”

“Now I remember! She claimed that many of them did not have families to bring them things, and she felt that they deserved to get something.”

“That’s right, and the year after that, she said that I should do something for you and me since we do so much for others,” I replied smiling widely.

“What a wonderful story Santa. I think you should keep doing what you do. Children often learn kindness from your example.”

“And the example of others,” I was quick to add.

“Of course, but there is something else children need to do before they can truly be kind to others,” Anya stated as she handed me a cookie. “The key to kindness is learning to be kind to yourself. The way you feel about yourself directly affects the way you treat others.”

“I could not agree more,” I responded. I finished my cookie and continued, “If only I could make everyone kind.”

“I don’t know that you can make all the people in the world kind and loving, but you definitely make a difference by the kindness you show to everyone.”