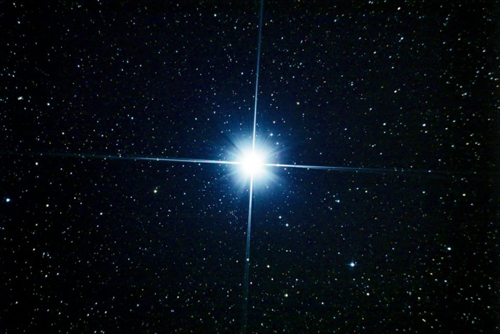 Excited, Ms. Claus turned to Quentin and asked, “Are you sure the program you developed will be able to turn off all the lighting in the village?”

Smiling, Quentin nodded.  “How many times are you going to ask me the same question? After all, when have my skills in research and development ever failed to please,” he replied giving Ms. Claus a playful hug around the shoulders.

“I know, Quentin, but this event in the sky tonight is a once-in-a-lifetime experience for most people and even elves. Therefore, all the lights in the village must be off so that we can see the appearance of the Christmas Star clearly,” Ms. Claus explained as she walked in my direction.

Seated by the fire, I watched as more elves gathered in the Common Room dressed in warm clothes. When Anya sat down in her chair, I turned. “Is everything in order?” I asked.

“YES!” Ms. Claus exclaimed. “I’ve checked with Quentin. His computer program is ready. Weller from the weather room confirmed that the clouds will clear out in less than an hour for a clear sky. This is going to be so wonderful!”

“Great,” I responded grabbing one of her hands to give it a quick kiss. “It’s good to see you this excited. Remember, even though I am old enough to have seen the star in the past, not everyone knows why it is unique. Since this was your idea, before we leave and make our way outside, please explain to everyone in the room the significance of the Christmas Star.”

As Ms. Claus nodded in agreement, the two of us stood up and walked in front of the fire. In my booming voice, I called for quiet. Once the room was silent, I stepped back and took my seat as my wife walked forward.

“I am glad that so many of you are willing to brave the cold to see a wondrous star in the sky tonight,” she announced.

“But Ms. Claus,” called out Hanna, one of the kitchen elves, “Having beautiful stars in the sky is kind of normal up here at the North Pole, so can you tell us why we are doing this and what we will actually see.”

“You read my mind Hanna because that’s exactly what I am about to explain.”

Before she could continue, a voice announced, “Most of you were not even born yet, but my mom described how she had seen something like this centuries ago and often described it to me as a boy. I never thought I’d live long enough to see an event like this.”

As the elves cleared a path for Smokey, the oldest elf at the North Pole, he hobbled forward with his cane and stood by Ms. Claus. Clearing his throat, he announced, “This star was last seen clearly March 4, 1226. That’s almost 800 years ago. Though this event occurred again in 1623, it was not visible for most people on Earth to see. So I want all of you to listen carefully to Ms. Claus and understand you are witnessing history tonight.”

After the elves gave Smokey a loud cheer, Ms. Claus looked around the room and began. “What we will actually see tonight is called the great conjunction because the two largest planets- Saturn and Jupiter- are aligning which means they will be right next to one another in the sky. Since this event is happening on the week of Christmas, many have begun calling the formation the Christmas Star. These two planets will be so close that they will appear to be touching. As Smokey pointed out, this hasn’t happened for centuries.”

Spotting Weller and Quentin in the crowd, Ms. Claus motioned for them to join her. “I need the two of you to explain the weather and how we will be able to see it clearly,” she whispered as they stood by her.

Nodding, Weller, manager of weather information, held up his hands to quiet the elves. “Today is December 21st, the Winter Solstice. The weather is clearing and should remain that way for about 20 to 30 minutes which is plenty of time for us to see the Christmas Star in the south/southwestern sky.  However, clouds may drift back, so it’s all in the timing. If we cannot see it tonight, it will still be visible on the 22nd. I’ll direct you where to look once we get on top of the hill above the village. I hope,” he added, “that you have dressed warmly. It’s bitter cold out there.”

Finished, Weller stepped backward as Quentin moved forward. “Before we exit the building,” he announced, “I will turn off all the lighting in the village. Yes, it will be very dark, but all of you were given two small sparkle stars to put in your gloves. Thanks to Fizzlepop’s creativity, these stars will warm your hands. However, they also will shine through your gloves to show the way as we walk pass the town and up the hill. Once on top, put your hands in your pockets, and all will be dark again.”

“Remarkable!” I exclaimed as Anya slipped her arm through mine.

“Yes, Fizzlepop certainly outdid himself again. But more importantly, tonight we watch history in the making!” she whispered.

“Ms. Claus, I think it’s time,” Weller remarked and directed the elves to exit the room.

Excited, the elves began whispering to one another while heading down the main hallway. Once everyone had left the building, Quentin hit a button on his computer and the village went dark. As they trudged their way up the hill, the sparkle stars within each elf’s pair of gloves softly lit the way through the snow and cold.

Once they reached the top, the clouds began to drift away. “Look up and to your left,” yelled Weller. “It’s outstanding!”

As the elves shifted their eyes to the left, gasps and exclamations could be heard throughout the crowd.

“I never thought I’d live long enough to see this,” announced Smokey. “More beautiful than my mom could have ever described.”

“Anya,” I said slipping my arm around her, “It is as beautiful as I remember it. Amazing!”

“It’s even more breathtaking than I imagined,” whispered Anya as the two of us gazed in wonder at the Christmas Star.

“I hope most people take time to see this,” I remarked. “I’ve done some amazing things in my life, but the beauty and power of such an event makes me feel humble.”

“We need magical moments like this,” Anya remarked as she stared at the Star, “and Nature has delivered the perfect one just before Christmas.”