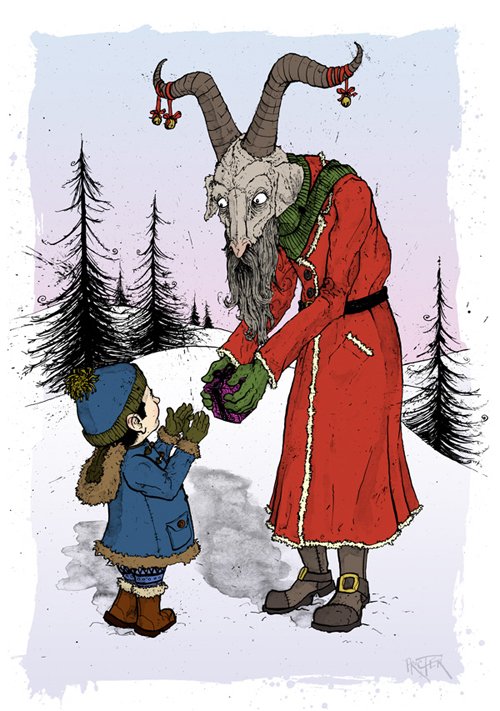 Sitting on a bench in the courtyard with Anya, it felt like someone was staring at me. As I looked around, I heard an elf behind me say, “See, I told you he doesn’t look like a goat.”

I turned to see Rose, an Elf University professor, standing there with Ryllae, one of our newest elves. “Someone thinks I look like a goat?” I asked as Ms. Claus laughed.

“Uh, sorry Santa,” Rose began. “I did not mean for you to hear me. Tomorrow we are talking about the traditions of different countries in school, and being from Ireland, Ryllae wondered if the stories she heard about you being Joulupukki (joulu-puk-ki), the Christmas Goat, were true”

“Many people in Finland believe that; however, there’s more to the story,” I responded.

“The elves moved in front of Anya and me as Ryllae said, “I’ve been told that Joulupukki was scary and demanded gifts from people, instead of giving gifts out.”

“That’s right, but when they began adopting a lot of the traditions from the United States, Joulupukki became Santa Claus,” Ms. Claus informed Ryllae.

“They also call me Father Christmas, and many still call me Joulupukki,” I insisted.

“The Finnish have not adopted all of the U.S. traditions though,” Rose warned Ryllae as she shook her finger in the air. “They still believe Santa lives in Korvatunturi Mountain, not the North Pole.”

Ryllae shook her head in confusion. “Isn’t that where most of your elves come from, Santa?”

“It is. Many believe that when I met the elves at Korvatunturi Mountain, I just stayed there. They also think I live there so I wouldn’t have far to go in order to leave gifts for them, which I do early on Christmas Eve.”

Scratching her head, Ryllae gave me a strange look and finally asked, “Wouldn’t the children still be awake and see you?”

“That’s part of their tradition. Christmas Eve is bigger than Christmas Day for the people in Finland.” I motioned to the elves to take a seat on the bench across from us. “It all starts with a traditional breakfast of rice porridge, topped with sugar and cinnamon, and plum fruit juice. Oh, and they place a single almond inside the porridge.”

“Just one. Whoever gets the almond will enjoy good luck for the next year.” I could see the excitement building in the eyes of the elves. “After breakfast they decorate their Christmas tree, and around 5:00 they settle in for their Christmas dinner.”

“Wait a minute,” Ryllae interrupted puzzled. “You said this was Christmas Eve. How could they eat Christmas dinner on Christmas Eve?”

“For them that is when they celebrate with family. As I said, Christmas Eve is the most important day for them.”

“Do they have their turkey dinner then?” the young elf asked.

“It is when they have their big meal, but it’s not turkey. Christmas dinner for the Finnish is usually a leg of pork, ham, or cured salmon served with root vegetable casseroles and a mixed beetroot salad.”

Starting to squirm in her seat, Ryllae asked, “Do the children go to bed after dinner so that you can deliver their gifts?”

“As Joulupukki, or Santa, I visit children in their homes after dinner. When I enter, I will ask if any children live there. When they reply loudly, I then ask if they have been good throughout the year. Upon hearing their reply, I will hand out gifts directly to the children.” Pausing, I looked at Ryllae’s stunned face.

“You see each child in Finland to give them their presents?!” the new elf exclaimed, her eyes growing larger.

“Not all of them. I choose different families each year to visit. I leave the presents for the other children under their Christmas trees.”

“That’s so different. It’s not like other countries,” Ryllae muttered.

I smiled at the confused elf. “You’re right. The beauty of Christmas is that each country can celebrate based on its own traditions.”

Beginning to realize how unique Christmas was, Ryllae nodded as she began to understand. “But if Christmas Eve is such a big day, what do they do on Christmas?” the student elf wondered aloud.

“Christmas Day is really important to the Finnish families as well,” Rose added. “Everyone tries to be home for Christmas.” 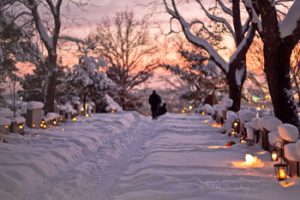 “There really is no better way to celebrate Christmas than with family,” Ms. Claus added. “One tradition I love is that since Finland gets dark around 3:00 in the afternoon in most areas on Christmas, families will visit those who are no longer with them and place a lantern at their graves. It makes such a beautiful Winter Wonderland of love!” Ms. Claus explained as she gave me a hug.

“That’s right!” I exclaimed. “Christmas Day is a time for rest and relaxation with the family. In addition to visiting the cemetery, they like reading books and eating leftovers from Christmas Eve.”

Ryllae wanted to know more, and asked, “I thought Christmas was also a time to be with friends. When do they celebrate with friends?”

“They do that the day after Christmas, which is called Boxing Day in many parts of the world. But there is more to that day,” Ms. Claus added smiling.

“What else do they do on Boxing Day?”

“Sports and outdoor activities like skiing are a big part,” Ms. Claus explained.  “For many, it is also time to share their good fortune with those less blessed. The Finns make donations to charitable organizations, or they may choose to help feed families. It’s all about being a gift giver, just like Santa.”

Ryllae’s face beamed with understanding. “So even though some traditions vary from country to country, one thing remains the same. It’s not about getting something,” the elf continued as she gleefully took Santa’s hand. “It’s about giving to those who do not have as much as we do. I like that!”

“I think you have it Ryllae. It’s not just the nourishment or gifts you are giving them. You are also showing others that someone loves and cares about them,” I responded.

“You see,” Rose began looking directly at Ryllae. “It does not matter if you are a plump, jolly old elf, or a scary- looking goat. It is how you treat others that really counts in the end.”

To read more about the Elves please check out: The Story of Elves, which was posted on May 4, 2020;