The Art of Gift Giving 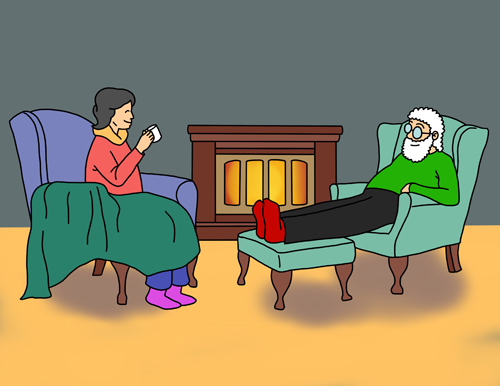 “Now that you have completed all your deliveries, and production for next Christmas will not start for several months, you should be feeling pretty good,” Anya said as we sat near the fireplace. Passing a plate of cookies to me, she continued, “But the look on your face tells me something is bothering you?”

“I am a little frustrated by the misunderstanding many children have over the presents they find under the tree on Christmas,” I responded as I took a gingerbread cookie from the plate.

“I’m not sure I understand.”

“Well as you know, I deliver two or three gifts to each child.”

“I do. We just don’t have the ability to make and deliver any more than that,” Anya said. Taking a sip of her tea, she asked, “Are you saying they are not happy with just two or three toys?”

“No, not at all. What seems to be happening is that parents buy things for their children and place them under the tree as well.”

Leaning back in my chair and putting my feet up on the foot stool, I replied, “It does, except for one thing. They don’t tell the children that they bought them; instead they let the children think their gifts are from me.”

“I’m still not seeing a problem.”

“Some of these presents are very expensive, and some things, like phones, need to be something the parents are ok with their children having. When they are placed under the tree, as if I had left them, the children think I can make and deliver anything they ask for.”

“I’m beginning to see the issue. Do you think parents are giving too much to their children?” Anya asked as she placed a blanket over her legs.

“I don’t think that is for me to say. But one thing I can say is that children tell their friends what they get for Christmas. When parents buy gifts and let the children think they are from me, it becomes a problem, especially when friends ask for the same thing and only one receives it.”

“When Tyler visited with me this season, I asked him what he wanted for Christmas, and he responded by asking, ‘Does it matter?’ I was a little surprised by his question, and then he continued, ‘Last year both my friend Tom and I asked for a Nintendo Switch. You gave Tom one, but I did not get one.’”

“How did you respond to that?”

“I explained to him that I did not leave the Switch, and that Tom’s parents must have given it to him. But I am not sure he believed me.”

“Do you think that any of the children whose parents can buy them a lot of extra gifts understand how others who do not get as much are affected?”

Placing another log on the fire, I continued, “Absolutely! This year I had more children than ever tell me that they had everything they needed and wanted me to give the gifts they would get to others who really needed them.”

“That has to make you feel good! I see that as a sign that the parents are probably teaching them about helping others.”

“I agree. I just wish that they would be honest with their children on where those extra gifts come from.” After sitting back in my chair, I continued, “But the children I really wish I could help more are the ones from poor or broken families. There was one little girl this year who told me all she wanted was ‘To have a happy life.’”

“She was with her class on a field trip, so there was not much I could do at the time. I stood up and gave her a big hug while explaining that I was not capable of that sort of gift. I told her that sometimes we have to make our own happiness out of the situation we are in, and try not to let things we can’t control make us feel sad.”

“What did she say?” Anya asked.

“She said she was not sure she could. I explained that eventually her sadness would pass and that she would be much stronger in the future because of her situation. She began to cry, and feeling helpless, I could feel a tear on my cheek as well. I wish I could have done more.”

“How sad for her. I’m sure there are more children like her than anyone knows.”

“Yes, there are. Fortunately, not all families, and not all countries, place such great emphasis on the ‘value’ of the gifts they give or get. Many people still focus on the season to give the gift of themselves.”

“Sort of like the girl who wanted you to give her presents to someone who needed them.”

“That’s right. But somehow gift giving has become who can give the biggest, best gift, or the most gifts,” I stated.

“How do you change that?”

“I’m not sure you can. Everyone gives for different reasons. Maybe the best thing to do is just keep stressing that the true meaning of gift giving is the reason for giving the gift and not the gift itself,” I said with a sigh.

Reaching over to hold my hand, Ms. Claus responded, “I find that when I give a gift from the heart, I receive the gift of gratitude and love in return.”

“And you don’t spend weeks or days worrying if your gift was appreciated by them, or worse, worrying if someone else gave them something better,” I said softly.

“Santa, we both know you are doing the right thing in your gift giving, and as your message reaches more and more people, maybe things will change back to the gift of oneself to help others instead of multiple expensive toys.”

Raising her hand to give it a light kiss, I responded, “I knew you would understand, and hope others will as well.”

“Maybe they do understand, Santa. Could it be that some parents are trying to give their children things they never had growing up? You and I understand that material things eventually wear out, but knowledge and values last a lifetime.” Walking over to the back of my chair, Anya slipped her arms around my neck. “Besides,” she added giving me a hug, “I think most parents eventually figure out how to teach their children what they need to know about the art of gift giving.”