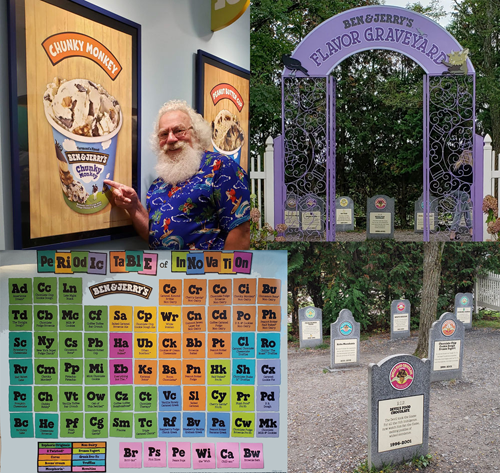 A full moon hung over the village fire pit, while the elves engaged in their favorite past time: making S’mores. “They eat so many that I’m surprised they haven’t turned into one,” I told Ms. Claus, laughing.

“I think they love toasting marshmallows, and the S’mores provide a reason to do it. But as for me!”  she exclaimed throwing her hands up in the air, “my sweet craving has to be ice cream, especially chocolate ice cream with chocolate chips. How about you?”

“Humm,” I responded, “now that you mention it, ice cream does sound tempting. Remember when we visited Ben & Jerry’s in Vermont?”

As Anya nodded, I began licking my lips. “What a tasty adventure that was. Now I can’t get Chunky Monkey out of my mind.”

Suddenly, the elves started gathering around us. “Did you say we’re going to Ben & Jerry’s?” one of them shouted. Then, several of them began yelling out their favorite flavors. ‘Cherry Garcia,’ ‘Half Baked,’ and ‘Phish Food’ seemed to be the most popular. Then all the elves broke out singing: “I scream – You scream – we all scream for ice cream!”

“What’s your favorite, Santa?” Quentin yelled from the back once the elves finished.

“That would have to be ‘Chunky Monkey’.”

“You bet!” I exclaimed. “With chunks of fudge and walnut – there’s nothing better. What about you Ms. Claus?”

“I could go for some ‘Chocolate Therapy.’ Chocolate ice cream with chocolate cookies & swirls of chocolate pudding.”

“Ho Ho Ho – what a surprise,” I responded. “You are a chocolate lover for sure!”

“I’d like some ice cream that tasted just like the S’mores we make,” Lyra told all the elves.

“You’re in luck then,” Duffer informed her. “Ben & Jerry’s make a toasted marshmallow ice cream with chocolate cookie and graham cracker swirls and fudge flakes. They call it ‘Gimme S’more’”

“Do they make one with white chocolate and maple caramel swirl,” Hanna began. “Where the swirl is nice and chewy, but smooth like maple syrup when you pour it over snow.”

“That is interesting,” I said. “What would you call it?”

“That sounds good,” Sledge chimed in, “but what about vanilla ice cream with maple syrup swirls and bacon bits? We could call it Wake and Bacon!”

“You just gave me a great idea for a Ben & Jerry’s ice cream!” exclaimed Smokey, my oldest elf.

“Well, I really like breakfast, so what would you think about maple ice cream that had fluffy pancake chunks, salty bacon bits and a chocolate syrup swirl? I’d call it Breakfast in Bed!”

“I think you’d have to stay in bed after eating something like that in the morning!” Bernard responded shaking his head.

“All of you are just being silly, now!” Anya cried. “Who would eat any of your crazy mixtures?”

“I don’t know,” I began as I rubbed my tummy. “Ben & Jerry’s might like these blends. They have always been ingenious with their ice cream flavors.”

“I’m sure they would have to draw a line with these ideas,” Ms. Claus remarked as she pretended to gag.

“I think we should let the elves be inventive and come up with creations for the Vermont kings of ice cream. Let’s make tomorrow night the Creamy Concoction Contest and take all the suggestions the elves have and submit them to Ben & Jerry’s.”

Fizzlepop raised his hand and yelled, “Are you offering a prize for the best idea?”

I rubbed my chin for a few seconds thinking, then said, “We will submit all the ideas and if Ben & Jerry’s decide to make any of them, I will give that elf a month off to visit his or her family in Korvatuntori Mountain.”

Cheering, all the elves started jumping up and down. As they went back to making their S’mores, I heard one say “Macaroni ice cream – I’ll call it Mac and Freeze!” while another shouted, “candied pepperoni chunks in vanilla ice cream- Pepperilla Ice Cream!”

Anya grabbed my hand and locked her fingers around mine. “Look at what you started now Santa!” Pausing for a moment she added, “Are you really going to give an elf an entire month off? You do realize the season will be here soon and you always wish you had more help.”

“Ho Ho Ho” I chuckled. “Do you think the Ben and Jerry’s Company will take any of these concoctions? Seriously!”

Laughing, Anya finally replied, “You never know! Remember when we went back to walk through the Ben and Jerry’s ice cream graveyard? Some of those weird creations had a short life and ended up buried there. What a hoot it was to read the descriptions of ice creams that had met their fate.”

“Whether the elves produce a winner doesn’t matter, but their creativity does. I bet one of them will succeed,” I responded grinning. “If they do, that means we will have to make another trip to Vermont to do more ice cream tasting. I like that!”

“Should have known that you had another motive for challenging the elves. Aren’t you the sly one Mr. Claus!” Anya exclaimed punching my shoulder. “Never a dull moment with you.”

I hope you enjoyed today’s story. I will post another one on August 15th. If you have any comments or if there is something you would like me to tell you about, please feel free to leave me a comment.

Be sure to check out Ben & Jerry’s Ice Cream

One Reply to “Sweet Treats”