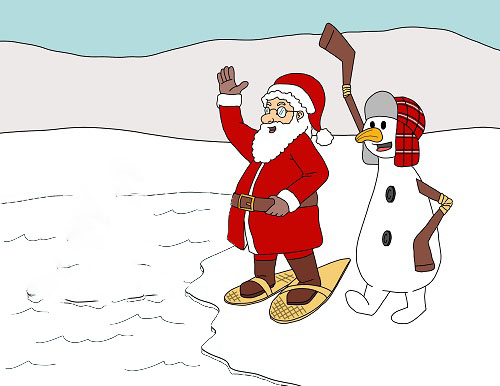 The summer sun was high in the sky at the North Pole as Ms. Claus and I exited the East Tunnel from the North Pole Village. Taking a deep breath, I said, “Nothing better than cool, fresh air.”

“And the warmth of sunlight on your face,” Anya added. As she took my hand, we began walking west. “The sun at Christmas time just does not feel the same.”

“At that point, it is only up for about three hours and never gets high enough in the sky to make a difference,” I explained. Pointing to a path between a small hill and a large ice spike, that looked like a huge upside-down icicle, we continued our daily walk.

Entering the gap, we noticed Nippy, Frosty the Snowman’s cousin. “Hi Ms. and Mr. Claus. I thought I’d find you taking a stroll outside this morning. Do you mind if I join you?”

“Not at all,” Anya said, putting her hand on his shoulder. “The more the merrier.”

As Nippy walked on the other side of Ms. Claus, the three of us continued.

Suddenly Anya stopped, turned to her left, and excitedly asked, “Did you hear that?”

I twisted to look in the same direction and listened. Not hearing anything, I cupped my hands behind my ears. After a moment, I looked at Nippy. “Did you hear anything?”

When the snowman shrugged his shoulders, I gazed at Ms. Claus and smiled. “Though we didn’t hear anything, it might be a bear cub playing around.” I then grabbed a handful of snow and packed it tight. “I’ll throw this over the hill. That will scare the cub back to his mother.”

Looking like a wobbling windmill, I wound up and threw the snowball. I was a bit shocked when it actually soared over the hill. With a smile worthy of a plate of cookies, I turned to Anya. “There, that should do it.”

As I placed my arm over her shoulders, something hit my head. “WHAT!?” Rubbing the spot carefully, I realized it was snow. “Nippy are you playing games with me?”

Surprised by my comment, Nippy put his hands on his hips, “I would never hit you with snow!”

Though none of us were hit, Anya soon made one and threw it toward the hill as two more hit Nippy on the back and me in the leg.

Laughing, Anya, Nippy, and I began making snowballs. As we hurled them, some hit the hillside while others flew over it. Returning snowballs sometimes found their mark causing us to drop to the ground or leap away from the carefully aimed missiles.

“I haven’t had this much fun in a long while,” giggled Anya as she continued to take aim and throw.

Finally, what we thought was a hill began to shift and stand upright.

Dumbfounded, we watched what we thought was a hillside continue to rise. Eventually, it turned to face us. Unable to move, we stared at the enormous figure as a familiar character emerged beside it and yelled, “Hello Santa, Ms. Claus, and Nippy. Great snowball fight! Stay where you are,” Polar Pete cried. “I want you to meet my friend. We were taking a nap when you hit me with the snowball.”

As Polar Pete, the best tracking Polar Bear I know, walked toward us, the gigantic creature ambled beside him. Unsure what it was, I stood in front of Anya as Nippy came up next to me.

“Sorry I hit you in the arm Santa,” the huge white bear chuckled after he stood in front of us. “When I got struck in the head with a snowball, I decided to get even. The snowball had already left my hand when I realized it was you. I’m sorry!”

Nodding, I laughed. “I owe you an apology too since my snowball smacked you first,” I remarked. “You see, Ms. Claus believed she heard something over in the direction of what we thought was a hill. I threw one to scare anything that was making the noise. Guess I should have looked first.”

Pete grinned. “Sometimes I snore, but anyway let me introduce you to my friend, Heddy,” he said pointing toward the massive individual beside him.

At about eight foot tall with white fur that was longer on his shoulders and arms that reached to his knees, the shape stepped forward, smiled, and bowed. His large teeth filled his equally large mouth which took up most of his conical shaped head. “I don’t believe it! An Abominable Snowman!!” I exclaimed

“He doesn’t look like any snowman in my family,” Nippy answered, shaking his head.

“We prefer Yeti, if you don’t mind,” the strange creature insisted.

“Heddy,” Polar Pete barked, “I would like you to meet Santa Claus, Ms. Claus, and Nippy.”

Anya finally moved out from behind me to get a good look at Pete’s friend. “I thought Yetis only lived in the Himalayan Mountains.”

Heddy sat on the ground so we did not have to keep looking up at him. “You’re right, but I have not seen my good friend Pete for several years and came up just to visit.”

“Well, it’s a pleasure to meet you,” I stated as I held out my hand for him to shake. “Maybe you and Pete would like to join us for dinner?”

“Santa,” Ms. Claus quickly protested, “our dining hall was designed for the elves, who are just a bit shorter than Heddy. I don’t know . . .”

I put a finger to my lips and Anya stopped. “It’s the middle of summer, Ms. Claus, and the warmest time of the year,” I explained. “Since the sun won’t set until after midnight, I was thinking we should have an old-fashioned picnic outside.”

“What a wonderful time that would be!” Ms. Claus exclaimed. “I’ll check in with Blanch. Together we’ll get things ready.”

Feeling a bit left out, Nippy asked, “What about me?”

“I’m afraid you would melt in the kitchen,” Ms. Claus said laughing. “Maybe you could help Santa and the elves set things up outside.”

As everyone scattered, Heddy turned to Pete, “If your North Pole friends are always like this, I may just have to move here!”

“A Yeti at the North Pole! Now that would be something!” Pete exclaimed. “Christmas might never be the same.”

To read more about Nippy and Polar Pete please check out: