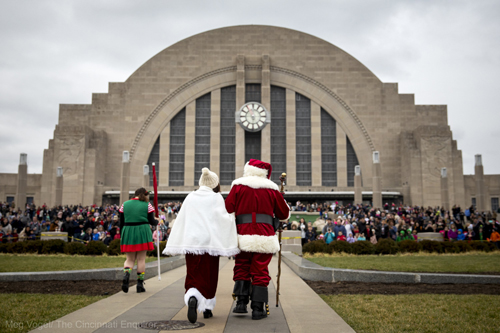 Highstep walked out of his office into the barn as part of his daily routine to check on the reindeer. Approaching the stalls, he saw Jonah and Sachi, both experienced elves with the reindeer, leading Olive and Clarice towards the door. “Are you getting Santa’s sleigh ready for his visit?”

The two elves stopped and looking back, Jonah replied, “Yes we are. Sledge brought over Ms. Claus’ sleigh, the Dulcet, for Santa’s visit today.”

“We thought that since these are the reindeer that usually pull the Dulcet, they would be the best for the trip,” Sachi added as she gave Clarice a small piece of a carrot.

“Perfect!” Highstep responded. “Santa should be here in about fifteen minutes.”

As the elves continued walking the reindeer out to the corral, Highstep caught up with them and explained, “You know this is a very special trip for Santa. He is meeting with some Super Heroes to thank them for what they do.”

“Did someone say Super Heroes?” Reiney asked as he looked out from the stall where he was taking care of Cupid. “Boy, I sure would love to go with Santa to meet them!”

“It does sound exciting,” Sachi said. “Maybe he will get to see Wonder Woman. She is my favorite!”

“You’re just saying that because she’s a female super hero,” Jonah said as he waved his hand impatiently.

Putting her hands on her hips, the elf turned and loudly stated, “That is part of the reason. Girls need other female role models as much as you ‘boys’ need male role models.” Everyone fell silent for a moment, fearing that Sachi had been offended by Jonah’s remark.

“If you are really interested,” she continued, “I especially like Wonder Woman because she is a lover of peace, who looks at conflict and fighting as a last resort! Besides, how cool would it be to have the Lasso of Truth so that no one could tell a lie.”

Reiney was quick to respond, “I definitely understand what you see in Wonder Woman, but my favorite is Spider-Man.”

“Hmm” Highstep chuckled, “Could it be that he wears so much red, just like the Big Man himself.”

All the elves began laughing until they heard Reiney yell, “That’s not true! THANKS HIGHSTEP!!”

The others stopped laughing as soon as Highstep put his finger to his lips. “Reiney,” he answered, “you know I was kidding. I just could not resist.”

“Ha ha ha, very funny!” Reiney replied sharply as a grin spread across his lips. “Though I like Spider-Man’s speed, strength, agility and balance, the real reason is his sixth sense or his Spider Sense, as I call it. He can always tell when danger is close by. In fact, I’d like to have all his abilities; then I could avoid your silly jokes.”

“He’s got you there, Highstep,” Jonah laughed as he gave him a playful shove. “The only Super-Hero I would ever want to be is Santa!”

“Did someone mention my name? Glad to see you are all in a good mood,” I said walking into the barn. “Thought I might find most of you here getting the reindeer.” Startled, the elves turned toward me surprised at my early arrival.

“You only said that because you saw Santa coming in, didn’t you?” Highstep said as Jonah smiled widely while shrugging his shoulders.

Sachi was the first to speak. “We know you’re going to visit some super heroes today at the Hall of Justice and we were telling each other who our super heroes are. Mine was Wonder Woman.”

“I’m confused!” Reiney exclaimed. “Are you saying our Super Heroes are not real?”

“Not at all, but I am talking about those who are making a difference for everyone by doing their daily jobs.” Blank looks on the elves’ faces told me they did not understand. “I’m talking about the teachers, nurses, doctors, firefighters and other first responders. They are the ‘real’ heroes.”

“But it’s their job,” Jonah stated.

“You are right. It is their job, but many of them go above and beyond what is expected of them,” I explained. “Besides, during the pandemic, they would often put the safety of others ahead of their own.”

“I agree with Santa,” reflected Sachi. “A few months ago, I saw on the news how doctors and nurses often didn’t go home. Instead, they stayed at their hospitals and took naps so that they could keep up with those who were sick.”

Nodding in agreement, Reiney smiled. “I remember watching that news show with you and was really impressed when they showed a group of firefighters who worked with the local police to go door to door in their community and distribute food to people who had very little.”

“First responders are fantastic, but Santa, I think you forgot a big group of Super Heroes,” Highstep announced. “What about all the children and adults who volunteered to help those in need?”

“I would never forget about them, and indeed many will be honored at the Museum today. There is a special place in my heart for the children who learn the art of giving early in life, and their parents who teach that to them,” I responded giving the elf a pat on his shoulder.

“YES! She has been trying to get those in charge to take Global Warming more serious and reduce carbon emissions,” I responded. “But there are many more doing things in their own communities. Like Luke who formed a group of his friends to help their elderly neighbors take care of their yards and homes. Or Emily and Tim who collected clothing and food to help other children who were homeless.”

“I bet they get a lifetime appointment to your Nice List!” exclaimed Sachi.

“Now that’s for me to know. What say we get these reindeer hitched to the sleigh so I can go and congratulate all those Super Heroes!”

Read more about the Reiney:

Read more about the Sachi:

Read more about the Jonah: