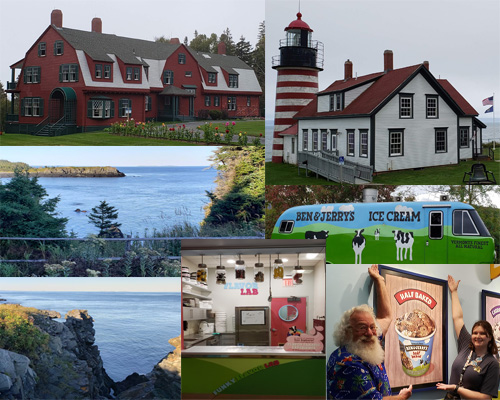 “What do you want to do Santa,” Ms. Claus asked as she finished getting ready for the day.

“I have a couple of special places I want you to see,” I responded as I pulled on my shoes.

“I like surprises. Any hints you can give me?”

“I think I will just show you,” I replied and gave her a wink.

Driving in the car heading east, we approached a small town. A sign, partially hidden by trees turning orange and bright red, said: Quoddy Head State Park. With an arrow pointing to the right, I turned down the road. As it changed from blacktop to gravel, we began to smell the salt water scent of the Atlantic Ocean.

Sensing that we were close to our destination, Ms. Claus gasped with surprise as Quoddy Head Lighthouse came into view. “What an amazing building. With the red and white stripes, it reminds me of Chumley and his candy canes.”

“They have been painting it like that since 1808, and I use it as a point of reference to help find my way on Christmas,” I explained.

After parking the car, we walked down the long gravel drive toward the lighthouse and small white brick building, now a Visitor Center. Tugging on Anya’s vest, I directed her to the back, by the lighthouse. “There’s something I want to show you before we go in the Visitor Center.”

As we walked around the house, we came to a two-by-four foot wide piece of granite with Easternmost Point In the USA, West Quoddy Head, Lubec, Maine carved on the surface.

“This used to be the very first place I would stop in the United States on Christmas.”

“Used to be?” Ms. Claus questioned.

“The Grays lived here then with their children, and took care of the lighthouse. With automation, no one lives here anymore, but I still use the lighthouse as a marker and then go into town and start my deliveries.”

“So, this is where it all begins for the children of the United States.”

“It certainly does,” I responded as we walked around and went into the Visitor Center, where they had pictures of the Grays I could share with Anya.

Finishing a tour of the house, Anya and I made our way outside, letting the wind blowing west from the ocean push us up the steep drive to our car. “That was interesting,” Ms. Claus said as I opened the door of the car for her. “But you told me you had two surprises. What’s the other?”

“Well, for the next surprise, we need to cross over to Campobello Island.”

As we drove into Canada a sign appeared saying, FDR International Park 2 km.

“He was,” I responded with a smile on my face.

“Then why is the park honoring him in Canada?”

“That’s a good question. You see,” I explained grinning, “Franklin and Eleanor had a summer home here on the island. Franklin loved coming here and sailing around the islands, while Eleanor enjoyed taking nature walks in the woods with the children every chance she had.”

As I pulled the car into the park, a large red house appeared to our right. “That’s the Roosevelt’s house. Today the area is an international park run by Canada and the USA. We can tour it if you would like.”

“I’d love to do that!” Anya answered, quickly opening her door once I parked the car. “You know I love historical places and their stories.”

“Franklin and Eleanor helped to improve the lives of others in the United States,” I explained as we headed toward the Visitor Center. “Together they found ways to work with others for the betterment of all. I loved my talks with Franklin on the back porch, and enjoyed sharing ideas with Eleanor on our walks around the island.”

Entering the Center, we signed up for the next tour. Sitting next to Anya, as we waited, I heard her whisper, “Thanks so much for this special day. I love going places with you.” Squeezing my hand, she added, “Learning about the people and areas that are meaningful to your life helps me see why you choose to do what you do.”

“Do you think we will be able to taste some of the ice cream,” Ms. Claus asked as we pulled into the crowded parking lot of Ben & Jerry’s Ice Cream Factory.

“If we do, I want to taste the Chunky Monkey that Chumley likes so much,” I responded.

As we walked toward the Visitor Center for a tour, Ms. Claus observed, “I thought we’d see more children, but there are mostly adults here.”

“I agree, but they look like children excited about going downstairs on Christmas morning to see what I left them,” I exclaimed.

Walking through the outside courtyard, I suddenly got very hungry. Every seat outside seemed to be filled with people licking ice cream cones. Sensing that I was about to get in line to buy one for myself, Ms. Claus grabbed my hand and said, “Let’s go inside and take the tour. We can treat ourselves to some ice cream after that.”

Reluctantly I agreed, “Okay. But I’m not leaving without some.”

Entering the Visitor Center, we found the main desk, and as we approached, Olivia, who was sitting there asked, “Are you here for the tour?”

“You betcha,” I responded.

“Well you are just in time. I am about to start a tour in just a few minutes. Here are your tickets, and we will meet just to the right by the door marked Tours.”

“When you hear the cow bell ringing, it will be time.”

It was not long before the bell rang, and everyone taking the tour moved toward the door, like cows heading for the barn.

After watching a short movie, we followed Olivia to a room looking down on the production floor, where they were making Justice ReMix’d.

Whispering to Ms. Claus I said, “This is what I always liked about Ben & Jerry. They care very much about other people, and are always trying to raise awareness about issues through their ice cream.”

With a look of confusion, Ms. Claus whispered back, “How does ice cream bring about social awareness?”

“Through their Justice ReMix’d, they are working with others to support reforms that invest in people instead of prisons,” I responded.

About that time, I heard the words I had been waiting for. “Now if you would all follow me down the stairs to our right, I will see if I can get all of you a sample to try,” Olivia said.

When everyone was in the room, Olivia first asked if there were any questions. I immediately raised my hand and asked, “What is the Flavor Lab over in the corner?”

“That is where our flavor developers try different combinations of ingredients for future ice cream flavors.”

Looking at Ms. Claus I said, “I’m glad Chumley is not here.”

“If he got a look at that Lab, he would want one just like it,” I laughed.

“Now, if there are no more questions, who is interested in some ice cream?” Olivia asked, as a tray of cups filled with ice cream was set on the counter. “Today we have our Vanilla Carmel Fudge for you to try,” she said handing out the cups.

Sounds of satisfaction filled the room as everyone gulped down their sample, until Oliva announced, “That concludes our tour. As you move down the hallway, on the left you will see pictures of our top ten flavors. However, not all our flavors work out the way we would like. So be sure to visit the Ben & Jerry’s Flavor Cemetery to see the flavors we no longer make. It is outside to the right and just to the left of our solar panel farm.”

Walking into the hallway, I saw the pictures of the top ten lining the wall. I got my camera out to take a picture of Chunky Monkey, but under #1 was a picture of Half Baked. Continuing down the hall, I finally found the picture of Chumley’s favorite under #9. Somewhat disappointed for Chumley, I decided to take the picture without the number, and let him continue to think it was #1.

Outside, Ms. Claus and I got some cones to eat while visiting the Flavor Cemetery. “You know Santa, Ben and Jerry’s is more than what I expected,” Anya stated while entering through the purple gate of the cemetery.

“I agree, Anya. Ben & Jerry always talked about doing things for the people and the environment, ever since they were in high school. They made sure the company they created, operated the same way, even after they retired and sold the business. You have to admit that drawing people in with delicious ice cream and making a social comment at the same time is an unusual way to do business.”

“But it works Santa,” Ms. Claus said licking her cone, “so let’s support what they do and enjoy our ice cream.”

Note from Santa: I hope you enjoyed today’s story. Ms. Claus and I have now returned to the North Pole, Ready for the Christmas Season. If you have any comments or if there is something you would like me to tell you about, please feel free to leave me a comment. Until next week . . .