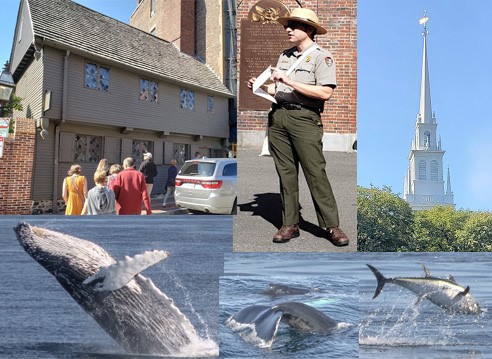 A Historic Tour of Boston

Exhausted from a day of walking around Boston, Ms. Claus and I sat on a wooden bench waiting for the train to take us back for the night. As the scent of cinnamon rolls filled the train station, I perked up. I was about to buy one when I heard, “Finchburg, train #425, is now boarding on track 9.”

As we walked out onto the train platform I said, “No one understands more than you do how much I love taking a train ride. It’s one of the few times I can sit back and enjoy the scenery without the responsibility of driving my team of reindeer, and deciding where to stop. If only they had hot chocolate, like the Polar Express.”

We boarded one of the double decker train cars and went upstairs. Finding an open seat, we both collapsed on the red bench seat from the long day. Anya smiled at me and said, “Santa I certainly enjoyed our day in Boston.”

“I did as well, but I could have done without all the hustle and bustle of a big city.”

Laying her head on my shoulder, Ms. Claus responded, “I know what you mean. So many cars and trucks, honking of horns, construction noises, it was not what we are used to. One thing we did not have to worry about was anyone recognizing us. People seemed to be in such a hurry to get to their destinations that I don’t think they ever looked at us.”

“All the noise was distracting,” I said, “but I think the walking tour with Eric, the National Park Ranger, was the best. He took us into old Boston, a quieter area, and taught us a lot about Paul Revere and the American Revolution.”

“We even got to see his house,” responded Ms. Claus. Turning to face me she added, “Eric even took us to see the old North Church, where Revere instructed Robert Newman, the sexton, to hang two lanterns in the steeple so that the colonials in Charlestown would know that the British were coming across the Charles River, just in case he did not make it to warn them.”

Getting our tickets out to give to the conductor, I smiled at the recent memory. “You’re right Anya. Hearing the stories about American history is more fun when you actually see the places where they took place. We tend to forget some things as time goes on, like the fact that Revere wasn’t the only rider sent that night to warn Sam Adams and John Hancock. Eric made sure to point out that Revere was sent across the Charles River to ride from the North, and at the same time William Dawes was sent to ride from the South. Surprisingly they both arrived in Lexington about the same time.”

“However,” added Ms. Claus, “Revere never made it to Concord. According to Eric, he was captured by the soldiers who eventually released him, but took his horse. While the soldiers concentrated on the capture of Revere, Dr. Prescott, who had joined Revere and Dawes between Lexington and Concord, avoided the soldiers and continued his ride to Concord to warn the colonials.”

“That’s right!” I exclaimed. “Imagine if Prescott had not made it. Things would have turned out very differently for the colonials.”

“What I find so fascinating about history, is that when you learn all the facts, there are always several things that seem to happen at just the right time, in order for events to happen the way they did,” Ms. Claus said thoughtfully.

Just as I was about to respond, “Next stop, West Concord,” came from the train’s speakers.

“This is our stop. We will have to continue our discussion in the car,” I said as the two of us made our way off the train. Our ride was about to come to an end, but our enthusiasm for history did not.

Having A Whale of a Good Time

“Have you ever seen a whale on any of your trips Santa?” Ms. Claus asked as we approached a small pier in Gloucester where the boat Hurricane II was moored.

“I am usually in too big of a hurry to get to all the children’s homes to watch for whales when I fly over oceans; besides it is always dark out.”

Many people were boarding the 115-foot vessel in hopes of seeing sea mammals about half the size of the boat. Walking up the ramp I suggested that we go on the top deck. “I think we will be able to see the whales better from up there.”

Nodding her head in agreement, Ms. Claus started towards the back of the boat where steps led to the top deck. Once on deck we promptly found two seats on the starboard (right) side of the boat near the bridge, where the captain controlled the boat.

“Might as well get comfortable. I read where it may take about an hour just to get far enough out in the Atlantic Ocean to where the whales are,” Ms. Claus said.

As we moved out of the harbor and headed to the open sea, a fishing boat passed us heading back towards Inner Harbor. I nudged Anya and pointed to the boat, and talking loud enough to be heard over the noise of the engine and wind I said, “They obviously had a good day fishing.”

With a quizzical look, Ms. Claus asked, “How do you know that?”

“Look at all the birds flying around the boat. They smell the fish and think they are going to get fed,” I said smiling.

Shortly after that a number of people started getting excited as they saw a whale. Almost in sync with the passengers, Jamie, the education director of the crew, announced, “Off the starboard side you may have seen a Minke Whale. We are going to proceed to the Stellwagen Banks National Marine Sanctuary, where we should have better encounters with the whales.”

As we approached the sanctuary, way out in front of the boat we could see a couple of tunas jumping out of the water, dining on the mackerel that swim near the surface. Then the captain began to slow the boat. Excitement grew again as everyone on the starboard side of the boat rushed to the port side to see a Humpback whale and her baby.

Over the next hour or two we encountered several Humpback whales feeding on the mackerel. Everyone moved from side to side of the boat as whales came to the surface on both the port (left) and starboard (right) sides. Everyone cheered as we watched the whales play. I especially loved it when they turned on their sides, waved their fins in the air, and then smacked them on the water.

“Oh my!” Jamie exclaimed over the speakers. “We do not usually see that . . .” her voice was cut off when all the passengers gasped as another whale breached. Regaining her composure, Jamie continued, “I’m as surprised as you all are! We must have Lady Luck on our side today!”

In all we witnessed four breaches during our tour before heading back to the harbor. Settling in for the hour ride back to port, I said, “You certainly picked the right tour and the right day. It was amazing to see all those whales, especially seeing them jump out of the water!”

Walking off the boat on the pier, we thanked the crew members for a very memorable day. Holding Ms. Claus’s hand, I said, “Thank you for such a great trip. I will never fly over an ocean again without thinking about the gentle giants that live there.”

Note from Santa: I hope you enjoyed today’s story. I will post more about our trip next Monday. If you have any comments or if there is something you would like me to tell you about, please feel free to leave me a comment. Until next week . . .