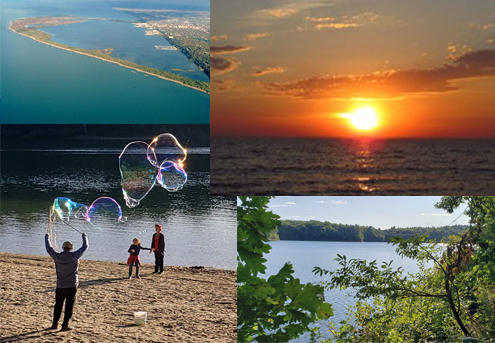 The first stop on our trip was to a seven-mile-long peninsula, that extends into Lake Erie in the shape of a breaking wave. As we drove out onto Presque Isle my wife, Anya, asked, “Tell me again why you wanted to stop here?”

As a cool breeze from Lake Erie filled the car with the scent of the pine trees, I responded, “Since no one has lived there for about a hundred years, I never stop on my annual trip around the world, and I wanted to see if it was still as beautiful as I remember it.”

We came around a bend and for a brief moment there was an opening in the trees, causing Ms. Claus to exclaim, “Wow! Look at that sunset over the lake. I’m beginning to understand why you would want to see this again.”

Just as she said that, an opening on the side of the road allowed me to park the car. “Why don’t we walk over there,” I suggested, pointing to a path that led up a small hill. “If I remember right, there is a beach there, and we will be able to see the sunset better.”

The pine scent began to disappear as a smell of water and fish became noticeable. Going up the small dirt hill and over the top, the dirt gave way to a sandy beach.  We took off our shoes, and walked out onto the beach. The cool sand felt good on my feet as it snuck between my toes.

“This is such a beautiful place. Why would anyone want to leave it?” Anya said as we walked up the beach hand and hand.

“Actually, there was just one man who lived here; his name was Joe Roots. But many people would visit here to picnic or swim at one of the beaches. They loved it when Joe would find them. He loved to entertain the children with his ventriloquism and stories about his ‘friends’ called the Jee-Bees. They were highly invisible nature spirits who could accurately predict the weather.”

“Were they really invisible, and could they predict the weather?” Anya asked.

“Well, I could never see or hear the Jee-Bees when he talked to them, but his weather predictions always seemed to be right! I even brought one of the fairies to visit once, thinking she might see or hear something, but she didn’t either.”

“I still don’t understand,” Anya said, as she picked up a shell from the beach. “Why would anyone willingly leave such a beautiful place?”

“It has more to do with other’s decisions than his own. You see, Joe really loved children, just like we do, and was eager to entertain them. Because of this, more and more people would go to Presque Isle to visit and enjoy the scenery, the beaches, and to have Joe entertain the children as well. Most visitors would even take extra food for Joe as their sign of appreciation.”

“Sounds like everyone was winning from the visits, so why would anyone want that to go away?” Anya asked watching a wave come onto the beach and cover her feet.

“Joe had built several shacks on the Isle, so that he could easily move about to fish or gather various plants like wild strawberries and blueberries, that he could eat. The town leaders also saw the beauty of Presque Isle and wanted it for all the people in town to enjoy. However, since Joe was the only one living there and had built so many shacks, the town leaders feared Joe would claim the Isle as his and not let anyone else live or visit there. When they forced him to be sent away, it allowed them to claim the Isle as theirs and use it for the town’s people. I remember putting all the town’s leaders on the Naughty List that year.”

Watching the sky and clouds turn several bright shades of red and orange, Anya and I walked along quietly, enjoying the beauty of a sunset. “I’m glad you brought me here,” she finally said, giving my hand a squeeze.

Putting my arm around her shoulder, and watching the sun dip below the horizon, I responded, “I’m just glad that they kept the land as Joe would have wanted it, and that more people can now enjoy the beauty of Presque Isle. Joe Roots would be proud of it.”

“Are we going to spend some time at Walden Pond?” Ms. Claus asked as we began to plan our day.

I smiled, for I knew that some of Ms. Claus’s favorite authors, Nathaniel Hawthorne, Ralph Waldo Emerson, Henry David Thoreau, and Louisa May Alcott, were buried in Sleepy Hollow Cemetery in Concord, Massachusetts not far from Walden Pond. She especially loved Thoreau who spent two years observing nature while living at Walden and then wrote about his experiences.

“Now why do you think we would have time to visit Walden Pond?” I asked, trying to keep a straight face.

Giving me a strange look, she finally answered, “If you want me to keep making you some of my special chocolate chip cookies, I’d think twice about that.”

Watching my face break into a smile, Anya knew that I had been joking. “Well,” she said smiling in return, “It’s good to know that you haven’t lost your sense of humor.”

Having visited with Thoreau when he lived there, I was anxious to see the place. “Do you realize Anya that Thoreau built his cabin there himself, and it only cost $28.12, on land owned by his friend Emerson, in the mid-1800s?”

“I wasn’t sure how much it cost him. But I do know that by living in the woods alone in nature, he gained a better understanding of how to live simply and deliberately. He was an amazing man.”

Since we both were anxious to visit Walden Pond, we quickly packed some snacks and drove to Concord.

The day we visited, it was about 63 degrees and there must have been a dozen people swimming in the Pond. While it seemed warm for us, after living at the North Pole, it seemed a little cold for the locals. Since Henry used to do the same thing, I can only guess they swim as a way to remember him.

As we began the two-mile walk around the pond, I was amazed by the size and number of trees. “Do you realize Anya,” I said slipping my hand through hers, “that when Henry lived here long ago, the area was called a wood lot where the Emerson family got their supply of wood for heating and cooking whenever needed. It was pretty barren in places back then. Now the pond is surrounded by several different trees and plant life.”

“I like the way you can peek through the trees and see the sunlight shimmering on the water,” remarked Ms. Claus as the two of us followed the path around the pond. “It’s so peaceful Santa, that it makes me feel good inside. Thoreau must have loved it here.”

Returning to where we started, we noticed a man on the beach entertaining some children by making very large bubbles. Sitting on a bench, Ms. Claus and I must have watched him and the children play for quite some time till the park service announced that they were closing for the day.

Stopping here brought back so many good memories of Henry and what he stood for. I was glad Ms. Claus recommended it. I am especially happy to see so many people going to Walden Pond in honor of Thoreau and to learn more about the man whose writings taught so much about man and nature.

Note from Santa: I hope you enjoyed today’s story. I will post more about our trip next Monday. If you have any comments or if there is something you would like me to tell you about, please feel free to leave me a comment. Until next week . . .