The History of Santa

Before he starred in The Santa Claus, Elf and Miracle on 34th Street, before anyone sat on his lap to tell him what they wanted for Christmas, before anyone ever left out cookies and milk for him, before he was even called Santa, there was Saint Nicholas. Cincy Santa™ will take you on a journey through history on just how Santa became who he is today. Beginning with his humble beginnings as Nicholas of Myra, you will learn how various Nicholas legends, pagan midwinter traditions, Nordic and German gods and, finally, the concerted efforts of American civic leaders, artists and ad executives made Santa the worldwide phenomenon he is today. 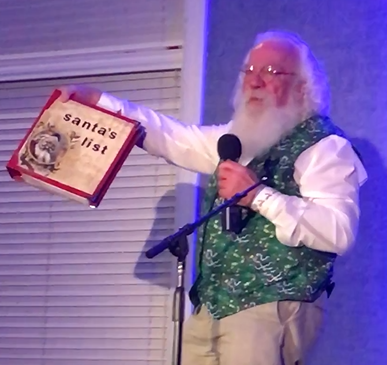 A Walk in the Red Suit

Who does not love Santa? He brings smiles and memories wherever he goes. Have you ever thought about how someone becomes Santa or what it is like to be Santa? It’s a world that not many people get to experience.

Now Cincy Santa™ (Santa Pat) has put together a story for you and your guests to share his unique experience. You’ll hear about how he actually became Santa and share stories about his encounters with children as well as adults that he has meet along the way. In addition, you will hear how his life has been transformed by portraying the greatest legend of our time, Santa Claus.

You’ll laugh and maybe even cry but you will believe in the goodness of people and the magic that is Christmas. If you ever wondered what it is like being Santa then invite Cincy Santa™ to your event for “A Walk in the Red Suit” and you will not be disappointed.