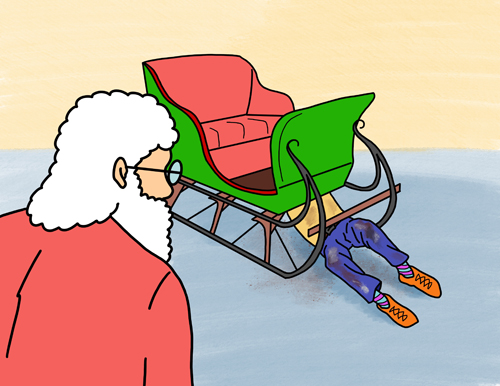 “What do you mean the sleigh is not ready?” I demanded. “Tomorrow is January 7th, and the children in the 18 countries who celebrate Christmas based on the Orthodox calendar are expecting me.”

Sledge helplessly shrugged his shoulders and looking down at the ground replied, “Santa I do not know what happened. All my improvements worked fine for your December 25th deliveries, but when I was running through the pre-flight check list for your departure, the right truss and runner would not go back down.”

“You mean one is down and the other is up?”

“That’s right, and I am not sure what is wrong,” Sledge remarked scratching his head, “but I’m working on it. If I can’t get it ready in time, would one of the mail sleighs work?” he asked.

“That’s a tight squeeze, but I might be able to make it work if necessary,” I replied. “While you work on fixing the sleigh, I’ll talk with Houser in the warehouse,” I explained heading out the door as Sledge slipped under the sleigh to try and fix the problem.

I found Houser just inside the entrance to the warehouse directing the elves with packages to the proper location for delivery. “Houser, do you have a moment; we may have an issue.”

Seeing the concern on my face, Houser immediately said, “Rackem, can you take over? Santa needs to talk with me.” Handing him the clipboard, Houser pointed in the direction of his office, and the two of us walked down the hallway.

As Houser settled into his desk chair, he asked, “What can I help you with Santa?”

Pacing slowly across the room, I explained, “There is an issue with my sleigh, and I may have to use one of the mail sleighs for the January 7th deliveries. Can you make that happen?”

“To be honest, there isn’t a lot of space in them for the deliveries you’ll be making on the 7th.”

“That’s why I came down to see you,” I said. “What if the gifts were broken into two batches, could you send them to me that way?”

Houser leaned back in his chair and stared at the ceiling. Snapping his finger, he smiled. “I think we can make that work. Once I know the capacity of a mail sleigh,” he explained, “I’m thinking we might get the gifts for a family of three in the bag. Then for larger families, I could tele-transport a second batch of gifts.” 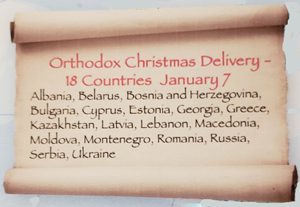 “I will lose a bit of time waiting for the second batch, but with only 18 countries that should not be an issue. It’s probably good that it didn’t happen on December 25th when I had 120 countries to visit.”

“Don’t worry Santa, I got this,” Houser stated. “I’ll start preparing the warehouse for multiple deliveries. We should have enough time to prepare things by tomorrow.” Before I could even respond Houser was out the door.

Confident, I headed back to the sleigh barn. When I entered, I saw Sledge standing in front of the drafting table where he had the blueprints for the truss and runner retractor. “Have you found anything?” I asked hoping he would say yes.

Sledge put his hands on his hips, shook his head and said, “I’m afraid not Santa. All I seem to have found is a strange scent coming from under the sleigh.”

“What kind of scent?” I demanded.

“Why? What would that have to do with the problem?” When Sledge realized I was serious, he continued, “It was a funky, earthy smell with a hint of sulphur. I figured it was something you picked up ….”

“Malodor!” I shouted without letting him finish, “Show me where you noticed the odor on the sleigh.”

As soon as I sniffed the area, I knew I was right. “No mistaking that stink. You are right; it is something I picked up while making my deliveries.”

“Not a what. Malodor is a who. You see, many years ago when I needed help making all the toys, I also considered using Gremlins. I chose elves because they were so caring, smart, and quick. Well, there was one Turdish Gremlin from Turden Island in the Arctic Circle who has never forgiven me.”

“And you think he sabotaged your sleigh?”

“He does try to do things like this from time to time. It’s been many years since the last time he did anything. Honestly, after we caught him trying to tell the Scout Elves that they did not need to report back to me each night, I thought he finally gave up.”

“But Santa, knowing who did it, does not help me fix it!”

“Actually, it does. Whatever he did, it has to be in the area near the scent. I’m confident that you will find your answer there.” Not waiting for a response, I turned and headed to the mailroom to check last-minute letters that needed my attention.

As I entered the mail room, Ms. Claus met me with a grin. “Sledge just called,” she remarked. “He said to tell you that you were right, and the sleigh is ready for tomorrow night.”

“As soon as I knew Malodor was involved, I realized Sledge could find the problem.”

“Malodor? Santa, please tell me he has not returned,” Anya said as she stood up.

“Yes, he has, and as usual the smell he left behind helped me direct Sledge where to look and what to do.”

“You know Santa,” Ms. Claus began as she gave me a hug, “one of these days he is going to do something you can’t fix and ruin Christmas for a lot of children.”

“That may be true Anya, but we outsmarted Malodor this time. However, we are going to have to watch for him. At least for now, we know the last of my deliveries will be made without any problems.”

To read more about the Orthodox Christmas, please check out: The Last Deliveries, which was posted on January 6, 2020.