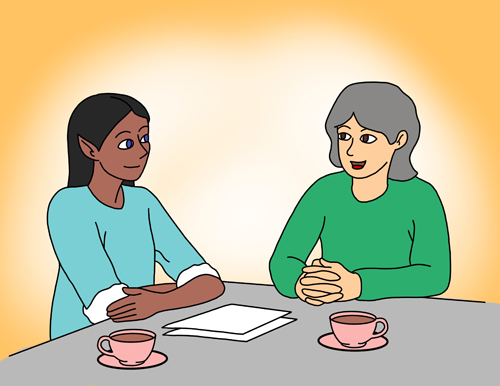 “I’m going to take a break now,” Ms. Claus announced to the elves in the mailroom. Turning to Carter, director of the mailroom, she asked quietly. “Can you ask Telsa, in the communication office, to call Sophia and have her come to my study as soon as possible?”

Carter smiled as he reached for the intercom. “Glad you are taking a break Ms. Claus. You’ve been working a lot lately, and you need to stay healthy. The holidays are nearly here.”

Smiling, Ms. Claus replied, “Thanks Carter for your concern.”

Reaching her study, Ms. Claus began to make a pot of tea. While the water boiled, she called down to the kitchen. “Blanch, can you send some sandwiches and those yummy scones to my study? I have a lot of planning to do with Sophia, and I want us to work comfortably.” Elves are a delight to work with, she thought to herself; what would Santa and I do without them?

Shortly after the food arrived, Ms. Claus heard a quiet knock at the door. Hoping it was Sophia, she called out, “Come in and make yourself comfortable.” Since Santa had allowed Sophia to become her assistant, Ms. Claus knew that she finally could tackle the concerns she had about making the mailroom more efficient.

“Good,” Sophia responded setting her notebook and pen on the table. Seeing the food, the elf breathed a sigh of relief. “I’ve been so busy that I haven’t eaten much today, but you think of everything. Thanks.”

“No problem. I thought we could eat and plan at the same time but without the noise of the mailroom, so enjoy the food.”

Sophia had been a good choice. She was on time, worked hard, and understood the mailroom and the importance of the Wish List as well as Santa’s Nice and Naughty List. “I’ve been thinking,” Ms. Claus began, “about the mailroom and how to improve working with children’s letters.”

“But Ms. Claus,” Sophia remarked putting her half-eaten sandwich on the plate, “I thought we had everything under control and that both you and Santa were happy with the improvements the elves and I have made?”

“We are,” Ms. Claus quickly responded as she noticed the shocked look on Sophia’s face. “But…  well… there is one area that is close to my heart that we need to look at this year. So, I thought today we could come up with a plan about what I call sensitive letters.”

Giving Ms. Claus an odd look, Sophia finally said, “I’m not sure what you mean Ms. Claus. No one in the mailroom has ever talked about sensitive letters.”

“You’re right, so let me explain. You know how Santa receives letters that bother him more than others?”

The mystified look on Sophia’s face made Ms. Claus realize that she and Santa had not discussed the issue. “Well let me give you an example so that you can see what I mean. Do you remember a little girl by the name of Carmen and how concerned Santa was about her?”

The elf nodded, pushing her plate back to the middle of the table. “Wasn’t she the little girl who was very sick with pneumonia and other health problems and didn’t seem to care about doing anything?”

Smiling, Ms. Claus nodded adding, “You have a good memory. Santa and I were very concerned about her. She didn’t even want to write her letter to Santa, so her dad wrote it for her in early November explaining Carmen’s situation. That’s what I call a sensitive letter. It describes how unhappy, worried, scared, or angry a child can be.”

Picking up on what Ms. Claus meant, Sophia shared another memory. “I think I know what you mean. Recently a boy named Noah wrote that he had no friends because his family kept moving from place to place. Whenever he settled into a new neighborhood and school, the kids already had their own friends and kind of ignored him. Was that also a sensitive letter?” asked Sophia.

“You definitely have the right idea,” said Ms. Claus. “Most children are happy when the holiday season begins. Their letters are full of stories about how they are trying to be good, and then they include their Christmas list. However,” Ms. Claus added shaking her head sadly, “there are other children who only see the sad things around them or are worried about their family and friends. Some are even angry and scared about what’s going on in the world.”

“You and Santa never really talk about that,” answered Sophia. “Why?”

“We don’t want to make things harder on the elves. Santa can’t find lost pets or heal someone who is really sick. These issues are beyond his control; yet that’s what many children write about in their letters, so I call them sensitive letters.”

“But if Santa can’t do anything about them, how can we do that in the mailroom?”

Sophia’s simple answer made Ms. Claus chuckle. “You’re right Sophia, but I wasn’t exactly thinking about the mailroom taking care of children’s problems. Instead, I want to get these letters to Santa more quickly. I’ve heard him often say, ‘If only I knew about that child’s problem sooner.’ In Carmen’s case, do you know what Santa did?”

“The same day that he read the dad’s letter, he called Carmen on his special phone and left her a message of encouragement,” explained Ms. Claus. “This year Santa has already received Carmen’s letter. It’s positive, and she is healthier. To her, his words made a difference. Mailroom efficiency, especially regarding sensitive letters, is my priority this year.”

Sitting up straight with a gleam in her eye, Sophia grabbed her notebook and pen. “I’m thinking that Carter and I could do some training with the elves who work the mail room, so they can recognize these letters. Then we should put them all in a special book, just like the Wish Book and Behavior Book. Maybe we could call it the Comfort Book?”

“I knew you were the elf for the job,” Ms. Claus responded. Grabbing the mugs, she poured some hot tea into both. “Let’s talk about how we can make that happen.”

As Ms. Claus sat back and listened to Sophia explain her idea in more detail, she thought how kind-hearted the elves were. When it came to children, especially those in need, she and Santa knew that bringing joy into a child’s life was the most important part of Christmas.