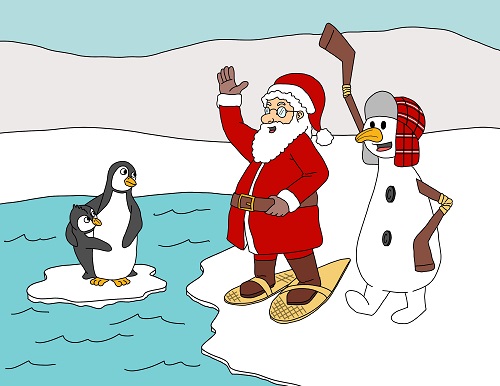 Having just eaten my one cookie for the day, I patted my belly, and then realized I needed some exercise. With the entire Santa Village being inside a gigantic ice cave, I decided to go outside and walk in the fresh air of the North Pole.

Grabbing my warmest coat, hat, and gloves, I headed to the South entrance. This is my favorite place to walk since it faces the sun. It’s also the entrance where two of my best friends at the North Pole, Nippy, Frosty the Snowman’s cousin, and Polar Pete, the largest Polar Bear at the North Pole, usually hang out.

After grabbing a set of snow shoes from the rack near the entrance, I stepped out of the cave and found myself immersed in a blanket of freshly fallen snow. The air was clear and crisp, with a somewhat sweet taste. As I looked out over the snow-covered rolling hills and spikes of ice pointing up toward the sky, I saw Nippy walking around a large area of melted ice that looked like a lake.

head, and his nose is a yellow squash that turns down to the ground like a parrot’s beak. Since there are no trees at the North Pole, hockey stick rejects from my sports shop, serve as Nippy’s arms. Recognizing him at this distance is easy.

“Hey Nippy! How are you today?” I called out while waving at him.

“Great! We are getting some lovely southern sun today, but not enough to melt me!”

Seeing what looked like a tag on the back of Nippy’s hat I continued, “Is that a new trappers’ hat? Looks like you left the tag on it.”

“What? No! This is my same old hat. What do you mean there’s a tag on it?” Nippy removed the hat from his head to inspect it when I interrupted . . .

“Nippy look! What is that?” I pointed out into the vast area of melted ice towards something floating in the distance.

“Well that can’t be, since penguins don’t live at the North Pole, and their cousin the Great Auk has been gone for many years now,” I stated.

As the ice pad drifted closer and closer to us, it became clear that indeed it was two penguins.

When the block of ice floated near, Nippy could see they were Chin Strap penguins and greeted them, “Hi, I’m Nippy, and this is my friend Santa. Are you guys lost?”

The taller of the penguins, almost in tears, responded, “I’m Waddle and this is Wiggle, and we ARE lost! We have been on this ice sheet for weeks now. It was …”

“We did not plan any of this,” interrupted Wiggle. “We fell asleep one night and when we woke up, we were surrounded by water and our home was just a speck on the horizon. I never felt so helpless before.”

Waddle continued, “Seems the temperature is warming up back home, and ice shelves are breaking off more and more. Somehow the water brought us here where it is cold and there is plenty of ice, just like our home, but where are we anyway?”

“This is the North Pole, and it sits on the Arctic Ocean. You came from Antarctica, which is also called the South Pole,” I explained. Hoping to ease the penguins’ worries, I added, “I have special reindeer that can fly while pulling a sleigh, and if you like I could have them take you back home …”

Interrupting, Wiggle and Waddle, almost in unison, said, “Could we just stay here?”

Wiggle continued, “We might want to return later, but for now we would just like to rest and get something to eat.”

“Well, it’s settled then,” I replied. “Nippy, alert the staff. We have two new guests and need to get them settled in. When they are rested, you can show them around. Just be sure to show them the best fishing holes so that they can get something to eat.”

We all headed down the ice tunnel towards the village. I thought about the dangers that the penguins faced getting here and was happy that Nippy and I were there when they landed to ease their frustrations and fear. I then began to wonder if someday the same thing could happen at the North Pole.