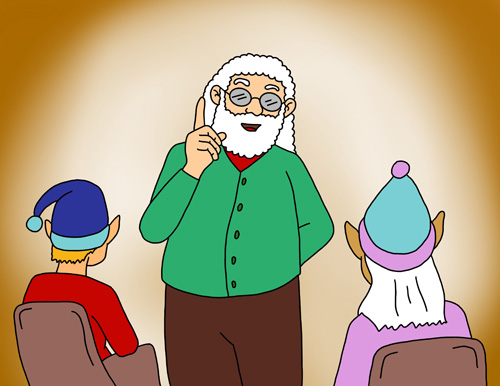 “I can’t believe this!” Tiny exclaimed, standing with his arms folded over his stomach and tapping his foot.

“I restocked all the parts bins, then Bernard came in and told me I had to do the tires all over again.”

“Did he give you a reason?”

“Something about tires being different sizes, and I didn’t have them sorted the right way. Who made him boss anyway?”

“I’m pretty sure that would be Santa,” Heart explained. “There he is now. You could ask him.”

Without hesitation, Tiny came up to me and asked, “How did Bernard become your head elf?”

Confused by the question, I asked, “Why, is there a problem?”

“I’m just wondering why he gets to tell all the elves what to do. I think I do a good job, but then Bernard will tell me I have to do it over again, his way.”

“I see.” I stroked my beard, as I thought about the best way to respond. “Christmas is a huge operation today. Toys need to be made, and I deliver them all over the world in one night.”

“That’s why you have the elves,” Heart stated.

“It is, but with 6,967 elves working in eight different toy shops and eight other departments, I could not keep up with all of them. So, I created a chain of command. Think of it this way. I’m like a school principal and Bernard is my assistant principal. Then each classroom, like each workshop, has a teacher in charge of that class. Here at the North Pole, however, there is a supervisor for each toy shop or department.”

Heart smiled at the comparison and finished my idea. “Then the students are like the worker elves here at the North Pole. The student’s job is to learn, and our job is to make toys.”

“Just great,” Tiny said sounding agitated. “But why is Bernard your assistant?”

“That’s a fair question,” I responded. “When I was in Lapland, Finland hundreds of years ago looking for reindeer, it was Bernard who approached me about having the elves work at the North Pole.”

Still not convinced that Bernard was the right choice, he demanded, “That’s all it took to become your head elf?”

“It was much more than that. His initiative was what sold me on him.”

Giving me a strange look, Tiny shook his head. “I don’t even know what that means.”

“In other words,” I began, “he took the steps and action to introduce himself instead of waiting for me to introduce myself to him or the other elves. And he did not stop there. While looking for reindeer that would allow my sleigh to fly, he knew someone, Queen Gwendolen, who could help me. Without being asked, he introduced me to her.”

“Okay, so because he helped you get your reindeer, you immediately made him the head elf?”

“No Tiny. It was at least two years after the elves moved to the North Pole to make toys, before I decided Bernard should be my second in command.”

“Why so long?” Heart asked.

“In the beginning, I handled everything myself. I oversaw all the workshops and departments. Then the demands of gifts for all the children in the world got to be more than I could handle. Ms. Claus and I decided we needed to let others help with overseeing the operation.”

Unconvinced, Tiny asked, “Did you have a competition for the job? Or did you just give it to Bernard?”

“Because Bernard already did most of what I wanted an assistant to do, I was satisfied. When he saw something that could be improved, he just did it. On top of that, the other elves respected him. When he spoke, they listened.”

Reluctant to give in, Tiny blurted out, “So, the truth is that he was your favorite, and you just gave it to him?”

“Except Ms. Claus,” I interrupted smiling. “Besides, I told all the elves what I wanted to do, and that if they were interested in the position they should come and talk with me.”

“I bet everyone applied for that job!” exclaimed Tiny.

“As it turned out, no one else asked about the position.”

Tiny scratched his head. “I find that hard to believe.”

“I’m not sure you understand,” I answered. “The elves saw how hard he worked and how fair he was in assigning duties.  His talent for finding the right job to match each elf’s skill level was unique. In addition, when something went wrong in the workshops, Bernard knew he would be held responsible, not the workers in the shop.”

“Humm . . . I guess that explains why he wants the tires a certain way,” Tiny said starting to realize how foolish he was to react the way he had.

“That’s right. He knew that if the tires were organized properly, the line would run faster because the elf putting on the tire would know exactly where to find the right tire. When he asked you to reorganize the tires, did he also tell you why?”

Tiny’s face turned an embarrassing shade of red, as his chin dropped to his chest. “Yes, he did. I’m sorry Santa.”

“It’s okay, “I said in a soft voice as I gently lifted his chin with my finger. “I’m glad we talked. Maybe now you can see Bernard in a different way, not as a boss, but as a teacher who is trying to help you become the best you can be.”

To read more about the Elves please check out: The Story of Elves, which was posted on May 4, 2020;