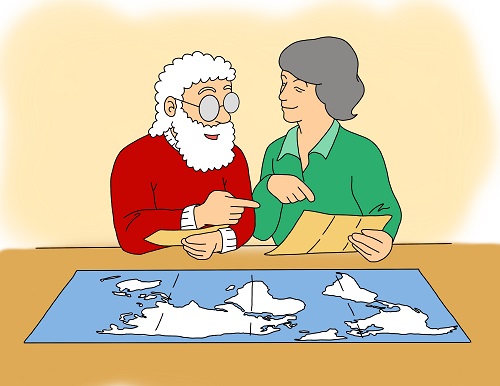 After looking over the production reports from Bernard, I leaned back in my desk chair. The scent of pine, from a candle my wife Anya gave me, filled the air, and I started thinking about the beauty of the areas south of the North Pole. Then the thought of Anya and I making one last trip to relax before the hectic season began, popped into my head.

Jumping up out of my chair, I walked over to Bernard’s office and found Chumley sitting on the couch talking with Bernard. They had several candy canes spread out on the coffee table in front of them. I interrupted. “Bernard, I was hoping to talk with you a bit, but it looks like you’re busy. When would be a good time for us to talk?”

“Now is a good time. Chumley and I just finished going over the new flavors of candy canes he has developed, and have the production schedule all set up for this Christmas. Before we talk though, you have to taste this new flavor.” Bernard picked up a candy cane from the table and handing it to me he said, “It’s Oreo cookie flavored! I think you might like it.”

I took the candy cane, unwrapped the end of it and took a small bite. As it crunched between my teeth, the Oreo flavor began to fill my mouth. “Oh, my goodness. This is fantastic. It’s like having a piece of candy and a cookie at the same time! The children are going to love this one Chumley.”

Bernard smiled broadly and moved from the couch to his desk. Pointing to the chair on the other side, he said, “Have a seat Santa.”

“Thanks. I just finished reading your reports, and with December just a couple months away, I wanted to be sure our toy shops will be able to make all the toys we need for Christmas.”

“Santa, we are in the best shape at this time than we have ever been.” Nodding to Chumley who was gathering the candy canes from the table, he continued, “Chumley was the last supervisor I had to meet with, and all the departments are ahead of schedule.”

Leaning back in the chair, I responded, “That’s good news. I was hoping that maybe Ms. Claus and I could take a couple weeks to relax and prepare ourselves for all the upcoming visits to homes, malls, and museums to see the children before the big night.”

“That sounds like a great idea. Everything is under control here. Have you given any thought as to where you might go?”

Chumley immediately jumped up, knocking all the candy canes onto the floor and shouted, “Vermont!” Realizing he should not have broken into our conversation he apologized, “I’m sorry! I know it was not my place to say anything, but when you mentioned Vermont, all I could think of was Ben & Jerry’s Ice Cream.”

“Vermont reminds you of ice cream?” I asked.

“Well, Ben & Jerry’s is in Vermont and they are my heroes. As the candy cane flavor developer, I always try to be like them. They are the best when it comes to creating new unusual flavor combinations. I especially love their Chunky Monkey flavor!”

“I always wondered who inspired you. Now I know,” Bernard remarked.

Jumping in, I explained, “Well if we end up in Vermont, I will be sure to stop and see them, just for you Chumley.” Turning back to Bernard, I continued, “Well if you are sure everything is under control, then I am going to talk with Ms. Claus and make some plans for a little trip.”

“We are good, and I hope you and Ms. Claus enjoy your getaway. You both deserve some time off before the big rush!” Bernard responded.

The possibility of the trip got me so excited, that I finally understood how children felt when they woke up on Christmas morning. Walking faster, I headed to the mail room where I last saw Anya.

Arriving there quickly, I noticed her talking with Babble at her desk. Looking up she immediately saw my big grin and smiled saying, “Your face tells me you’re up to something Santa. Am I right?”

“You are Anya!” I responded. Sitting in the chair in front of her desk I continued, “I just talked with Bernard and everything is going smoothly, so I thought we would take a little vacation before the season begins. You interested?”

“You bet I am! I was hoping you would want to do this. What about going to the Northeastern United States?”

“That’s what I was thinking. We could do some history touring in Boston, and maybe even go whale watching.”

“That sounds like fun, but I really want to see the leaves turning colors.”

“No problem. I think we should visit Vermont then. Chumley asked if we could check out a place called Ben & Jerry’s for him. Seems they make different flavors of ice cream.”

“That is so Chumley. He is all about new flavors. When did you want to go?”

“I say we leave tomorrow. I’ll have Birdie, the elf in charge of the Scout Elves, talk to some of our J.A.T.S. (Jolly Assistants To Santa) to see if we can stay with some of them while we travel.”

“Great! They could also tell us the best places to go see.”

“It’s a date then. Let’s try to wrap up early today, so we have time to pack for the trip tonight.”

Smiling, Anya reached across her desk and giving my beard a yank, she pulled me closer, and gave me a huge hug and kiss. “We are going to have so much fun together!”

I hope you enjoyed today’s story. For the next few weeks, I will be posting stories about our adventure. Until next week . . .
Illustration by FireMane Studio

2 Replies to “Santa and Ms. Claus Go On Vacation”