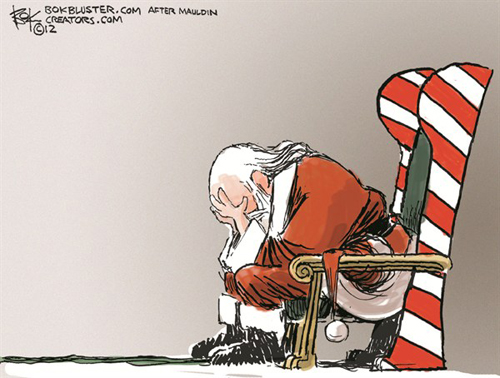 Lyra, one of the sweetest elves at the North Pole, walked into Bernard’s office and placed her hands on her hips. The head elf looked up and said in a sympathetic voice, “I know, I know.”

“Well, we have to do something!” Lyra demanded.

“Lyra you know this happens every year after Christmas. You just have to give him some time.”

Just then Doheny, the North Pole’s best cookie baker, came into the office. “I took him some cookies, and he just had me put them on the table. Any other time he would have eaten them right away.”

“What do you want me to do? If anyone knows how to get him over this, it would be Ms. Claus,” Bernard said leaning back in his chair.

Lyra looked at Doheny, and said, “He’s right. If anyone should know how to get Santa out of the doldrums, it’s Ms. C.”

“I just saw her in the kitchen. Let’s go see if she is still there,” Doheny responded as she walked out the door.

When the elves arrived at the kitchen, they found Ms. Claus sitting at a table enjoying her morning cup of tea. As they approached, Lyra asked, “Do you mind if we join you?”

“I’d love that.” As Lyra and Doheny pulled chairs out to sit, Ms. Claus continued, “Maybe you two can help me with something.”

Lyra looked at Doheny with raised eyebrows, then back at Anya and said, “We’d love to. How can we help?”

“Well, you know Santa did not see many people last year because of the pandemic, and then this year he was busier than he has ever been with visits.”

“We could see his excitement during the season,” Doheny responded. “He seemed so happy.”

“He was,” Anya said as she held her cup with both hands and sipped her tea. “But now that the season is over . . .”

“He is a bit out of sorts!” Lyra blurted out.

Surprised by the quick response, Anya continued. “So, you noticed it too. I’m used to this happening, but it has never been this bad or lasted this long before. I was hoping maybe you could help me get him out of the blues.”

“That’s why we came to see you. We were hoping you could give us some ideas on how to do that,” Doheny stated as she placed her hand on Anya’s. “Maybe if we put our heads together, we can come up with something.”

“What about a party?” Lyra asked.

“He would make up some excuse not to go to a party,” Ms. Claus said in a sad voice as she played with her cup. “Especially if he thought it was for him.”

“What if it was a surprise?” Doheny wondered aloud.

“I don’t know how you could do that. I can rarely surprise him with anything.” Shaking her head, Anya continued, “It’s just his nature to know what’s going on . . . All the time!”

The elves nodded in agreement and thought about how they could pull a surprise off. Suddenly, Lyra sat up straight and grinned from ear to ear. “I think I have it!” Slowly shaking her index finger, she continued. “You know many of the elves will be going home to the Korvatunturi Mountains in Lapland soon, to visit with their relatives before we begin gearing up for next Christmas.”

“So? They always do that,” Doheny responded.

“That’s right, but Smokey, Santa’s oldest elf, has mentioned that he may retire this year and stay in Lapland.”

“We could tell Santa it is a surprise party for Smokey!” Anya exclaimed. “That’s perfect!”

“But what would we do at the party to get Santa to drop his gloomy attitude and have fun?” Doheny asked.

“That’s easy,” Ms. Claus began. “We need to watch his two favorite movies. He loves The Miracle on 34th Street because it is centered on believing and good will. Then we could view The Boy Called Christmas. That one reminds him of how he found the elves to help him with his mission.”

“Movies always make him feel good, but we should do more than that,” Doheny added.

“Maybe in between the movies we can have a cookie eating contest!” Lyra insisted. “Nothing gets the Big Guy more excited than showing he is the champ at eating cookies.”

“What about a dance contest?” Doheny said as she began dancing in her chair. “He fancies himself the best and fastest at the Reindeer Macarena!”

“Sounds like we have a plan,” Anya stated as she leaned back in her chair. “The elves will be leaving this weekend. Can we get this organized by Friday?”

Lyra and Doheny looked at each other, nodded and then turned to Ms. Claus and said, “No problem!” in unison.

“Can you two tell the elves? Also, remind them to keep it a secret because Santa can sniff out a surprise quicker than a polar bear can find his dinner?” Anya stated grinning.

Giving a thumbs up, Lyra said, “He’s being so cranky, most of the elves are avoiding him, so that should not be a problem.”

“I’ll take care of making sure we have enough cookies for the contest,” Doheny added.

“Then I’ll take care of making sure Santa gets to the party,” Anya said, as she pushed her chair back to get up. “Let’s get to work.”

Friday afternoon, Anya found me sitting in front of the fire. “How’s your day going?”

“Okay, I guess,” I responded without looking up.

“You know many of the elves will be leaving this weekend to visit with their families. Are you planning on saying good-bye to them?”

“Haven’t really thought about it.”

“Smokey is thinking about retiring, and he may not return for the next season. Some of the elves are getting together in the meeting hall for a little party for him. Would you be interested in going?”

As we walked toward the hall, Anya looped her arm through mine and said, “Santa, you need to shake off your blues. The elves see how you are and it’s making them sad.”

“I know,” I responded nodding. “It’s just that after visiting with so many children and their parents, and seeing the happiness on their faces, it’s hard to suddenly be cut off from that.”

As we approached the building, I opened the door for Ms. Claus. After she entered, I followed and was greeted with a chorus of “Surprise” from all the elves, who then began singing, “For he’s a jolly good fellow.”

Dumbfounded, I stood speechless and stared at everyone. Finally, I turned to Anya and gave her a big hug.

Anya whispered in my ear, “Everyone is worried about you, and they decided to do this to help you get back to being yourself.”

As I let go of Anya, I moved through the crowd of elves. One by one, all of them gave me hugs and thanked me for what I had accomplished to make Christmas such a success. As tears welled in my eyes, I realized how gloomy I had been since Christmas. Though it was over, that did not mean that the love and good feelings I had received during the season ended.

Clapping my hands for silence, I looked at the roomful of elves and announced, “Thank you, my dear friends for all the work you have done. This surprise has made me realize that the fondness we share for one another does not stop on the big day; it remains. We just need to open our eyes, ears, and hearts to the affection that is around us all year long. Happy New Year!”

Looking back at a smiling Anya, I blew her a kiss and mouthed, “Thank you!” and joined in with the singing and celebrating with my North Pole family.

I hope you enjoyed today’s story. I will post another one February 1, 2022. If you have any comments or if there is something you would like me to tell you about, please feel free to leave me a comment. Until next week . . .

One Reply to “Sad Santa”