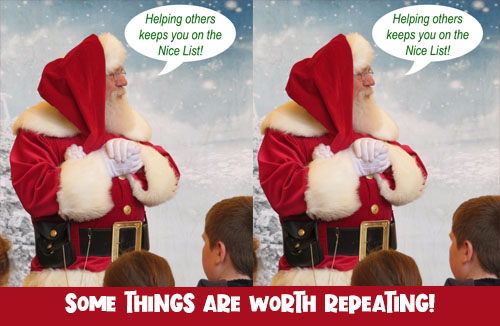 Going over some reports on my desk, I heard a knock. When I looked up, Pete and Repeat, two of the best elves in quality control, stood at my opened door. “Can we come in?” Pete asked.

“Can we come in?” Repeat duplicated.

With a wave of my hand, I motioned them to enter. As they did, Pete placed a beautifully wrapped present on my desk. “We have a little something for you Santa.”

“Well, this is a surprise. What’s the occasion?”

“Nothing special,” Pete began. “We just saw this and thought you would like it.”

Once again Repeat copied what Pete had said, but I didn’t think too much about it, especially since these elves check and double check each other all day long in quality control. I have listened to them repeating each other ever since I met them hundreds of years ago.

Excitedly, I untied the bow and removed the paper. Once unwrapped, I lifted the lid off the box and pushed the tissue aside. Reaching in, I pulled out a hat just like my Christmas hat, only green with white trim and ball. “This is nice!” I exclaimed. “I don’t have a green hat. This will be perfect for some of my casual outfits. Thank you very much.”

“You’re welcome the two elves said in unison. Then Repeat took the hat and the box over to the table in the corner of my office. “Would you like some of Judy’s Hot Cocoa?” I asked keeping a careful eye on Repeat.

Grabbing the pot of hot cocoa that Judy makes for me each morning, I began filling a cup for Pete. Curious about what Repeat was doing, I tried to look out of the corner of my eye, but Pete distracted me with his constant chit chat.

As we sat on the couch to enjoy our cocoa, Repeat came over and set another beautifully wrapped package in front of me. “What’s this?”

“Nothing special,” Repeat said grinning. “We just saw this and thought you would like it.”

“Didn’t Pete just say the same thing after giving me a gift,” I wondered to myself, “but the wrapping is even nicer on this one. What’s going on?” Putting my thoughts aside, I opened the box and found the same hat from the first present. I stared at both of them with a puzzled look on my face.

“We thought it would be fun for you to open your gift twice,” Pete said with a giggle.

“We thought it would be fun for you to open your gift twice,” Repeat echoed.

Before I could say anything else, the two elf friends scurried out the door as they waved and said goodbye, one right after the other. Though I was used to hearing them repeat, I was beginning to think something was up.  “Why wrap the same gift twice for me to open,” I muttered.

Feeling a bit confused, I returned to my work of reviewing the morning’s mail. I began reading a letter from Noah in Indiana, when I heard another knock on the door. Doheny entered with a plate in hand. “Here is your snack for the morning. I made Gingerbread cookies today.”

“Thank you, Doheny. These will taste great with the hot cocoa Judy brought over earlier.”

Doheny placed the plate with a napkin on the corner of my desk, then turned and left the office. Before I could take a bite of my cookie, there was another knock at my door. Doheny entered with another plate in hand. “Here is your snack for the morning. I made Gingerbread cookies today.”

“But you just . . .” I started. However, before I could finish, the best cookie baker at the North Pole was gone.

Leaning back in my chair, I stared at the two cookie plates, then over to the box with the hat Pete and Repeat had given me. I could not find a reason for the way the elves were acting. “I need to talk to Bernard about this. Surely, he will know what’s going on,” I thought aloud. Putting both hands on the edge of my desk, I pushed myself up and headed over to talk with my head elf.

Entering Bernard’s office, I found him seated at a table, fiddling with a model for a new toy. Surprised to see me he asked, “Santa! Did we have an appointment today?”

“No,” I answered and waited to see if he would repeat himself like the other elves had done.

As Bernard and I looked at each other without saying a word, he finally shrugged his shoulders and asked, “What can I do for you, Santa?”

Relieved, I told him of my recent experiences with Pete, Repeat, and Doheny. “Is there something going on with the elves today that I don’t know about?”

“So, you’re experiencing the same things today as well,” Bernard responded laughing. “I thought I was going crazy.” Pointing to the table with the toy model, Bernard continued, “Quinten called me to see if I had looked at this yet, then called back not two minutes later and asked me again, saying the exact same thing as the first time!”

“Are the elves pranking us?” I wondered.

“With all the changes to the production lines in order to make some new toys for this Christmas, do you think the elves are worried about their jobs?” Bernard asked.

“Maybe you should go see if Sam, your elf in charge of social activities, can put together an event for the elves to relax.”

“Great idea! I knew you would be able to help me out.” I thanked Bernard and headed towards Samantha’s workplace.

Reaching for the door knob to Sam’s office, I was surprised when it opened. Bug-eyed, Sam appeared surprised to see me. “Santa, Santa,” she muttered.

“Are you leaving?” I asked. Without giving her time to respond, I added, “Do you have a couple of minutes for me?”

Sam waved her arm, motioning for me to enter. “Absolutely Santa. Come on in.”

As I walked past Sam and into her office, she repeated, “Absolutely Santa. Come on in.”

I immediately wondered if she was stressed like the other elves, but then dismissed the idea because her duties didn’t include working on any of the toy production lines. Maybe she was repeating herself because the elves were always saying, ‘Play it again Sam’ to her.

Hesitantly, I explained what had been going on with everyone repeating themselves. “I thought it may be because of work related stress,” I stated, “and wondered if there was something you could help me do for the elves to create a relaxing evening.”

“As it happens, I have a movie planned for tonight,” Samantha mentioned. “But the elves are not acting like this because they are worried about work.”

I stood with a blank look on my face, waiting for Sam to repeat herself. This time she didn’t. Instead, she asked, “You don’t know what today is, do you?”

Shrugging my shoulders I responded, “I guess not.”

Grinning from ear to ear, Sam then said, “Today is National Repeat Day! That is why the elves are repeating what they say or do.”

“Now, that makes sense! They are just having fun. What movie will you be showing them tonight to celebrate this Repeat Day?”

“Why there is only one movie made just for this day,” she answered, “Groundhog Day!”

When I did not respond, Sam asked, “Didn’t you ever see the movie about a reporter having to repeat Groundhog Day over and over again?”

National Repeat Day is celebrated each June 3rd and today’s story was how the elves celebrated it this year. What kind of things do you find yourself repeating throughout the day? Are there phrases you say or actions? Have you ever done something worth repeating? How about something you never want to repeat again?