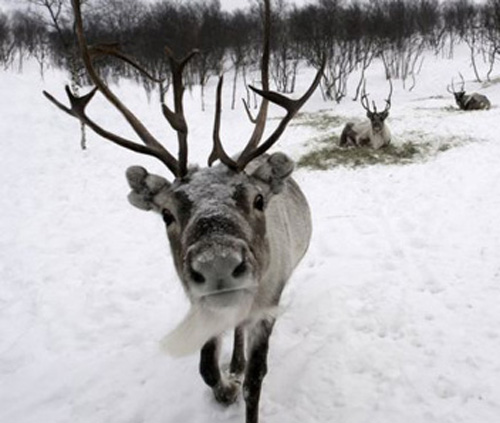 As I walked through the barn, I noticed Highstep, the elf in charge of the reindeer, sitting on a bale of hay with his legs crossed and a smile on his face. “You look comfortable and happy. What’s going on?” I asked.

“I have a new elf, Reiney, to help with our reindeer, and I heard him bragging about how much he knew about the animals.”

“You want an elf who knows everything, don’t you?”

“I do. However, when elves graduate from Elf University, they usually think they know everything. But the one thing they can’t learn in school is the personality of each of our reindeer.” Leaning back against Comet’s stall, Highstep continued, “So I like to test each elf on their first day.”

“Each reindeer has some qualities that are a little different than the others. Like Blitzen. He is the fastest, but will never win a race.”

“Because he wants others to think they are faster, so they build up their confidence?”

“That’s right. Or how Vixen never brags about how smart she is so the others do not feel inferior,” Highstep responded moving over on the bale of hay to make room for me. “Have a seat.”

As I sat down, I looked around the barn for Reiney, and asked, “So where is he? Is he taking your test now?”

“He sure is!” Highstep exclaimed. “I sent him out to take care of Cupid.”

“Cupid! How is that a test? Cupid is the most loving of them all. That’s why he is on my team.”

“And that is why Cupid is the perfect test for a new caretaker elf.”

“Let me guess. You did not tell him about how loving Cupid really is?” I responded.

“Nope! By the time he figures it out, it will be too late,” Highstep said smiling even bigger now in anticipation. “Reindeer may not be able to see or hear very well, but they have a keen sense of smell. Cupid will know Reiney is in the pasture before he closes the gate.”

“And there is no way he will out run Cupid. Last time I checked, the fastest an elf can run is eight mph, while reindeer can reach speeds up to 48 mph,” I added.

Just then several elves who work with the herd came into the barn. “Did we miss it? Has the new elf come back from taking care of Cupid yet?” several of them asked.

Before he could finish, Reiney came into the barn screaming, “Help! Someone get me a towel!”

His face was completely covered, from under his chin all the way up his face and into his hair, with slobber as thick as the slime children love to make and play with today.

“What happened?” Highstep asked, even though he already knew the answer.

“Cupid came after me as soon as I entered the pasture and licked me. I tried to get away, but I couldn’t run fast enough,” Reiney said as he tried to get the slobber out of his eyes.

“He was just giving you a little love kiss,” I said as the elves rolled on the floor laughing. “I hope you realize the elves are only laughing because the same thing happened to all of them when they first started working as part of Highstep’s team.”

Handing Reiney a towel to wipe his face, Highstep explained, “Yes, you learned a lot about these antlered creatures in school. But you also need to know that, just like elves, they are not all the same. You cannot assume that any one of them will act the same as another.”

“I certainly know that now!”

“Just be prepared for anything when you work with them, and you will be fine,” Highstep said. “With my help and the help of all the other elves, you will discover the traits of each of Santa’s team.”

“That’s right,” Sledge said as he wiped some of the slobber out of Reiney’s hair. “Don’t hesitate to ask any of us if you need help. We pride ourselves on working together as a team.”

“I have to admit, I thought I was ready for anything. I didn’t realize that for as much as I learned, there was even more to understand after receiving my diploma.”

“Now you will be learning new things right along with us,” Sledge informed him.

“I think you are going to be a great addition to Highstep’s team,” I stated as I extended my right hand to shake Reiney’s. “I’m happy that you did not get mad about Cupid’s kiss, and have an open mind to learning more from your teammates.”

“Now I think you should get a shower and clean that mess off your face and out of your hair,” Highstep suggested. “Then the elves will show you around and get you started on the right hoof.” Laughing he corrected himself, “I meant on the right foot.”