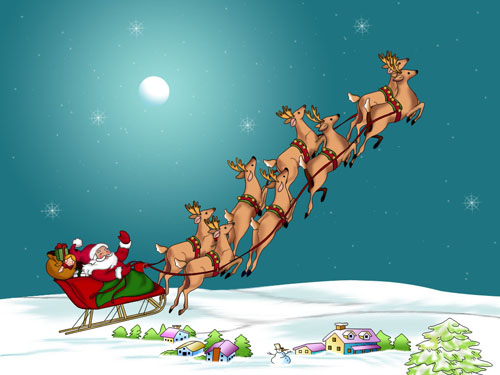 Resting both arms on the top rail of the fence around the inside pasture, I watched the reindeer play. I had handpicked each one because of a special quality they each brought to the team. Holding a special place in my heart for them, they became part of my family, just like my elves. As I surveyed each one, I heard a loud voice behind me.

“Santa! We’ve been looking for you.”

Turning, I saw Sledge, the elf in charge of sleighs, and Quinten, the director of research and development, approaching me.

“Gentlemen, what can I do for you?” I asked. Since both had serious looks on their faces, I wasn’t sure what to expect.

Quinten spoke first. “You know we are always looking for ways to improve your sleigh.”

“I do and I love the improvements you made recently. I’m not sure what else you could do.”

“Well,” Sledge started, “have you ever heard of GPS?”

“I love German Potato Salad!” Excited now about eating I continued, “Is it time for lunch?”

Quentin placed his hands on his hips and laughed. “You know Santa, sometimes I think you put eating before the children.”

“Global Positioning System, not German potato salad!” Sledge exclaimed as he rolled his eyes. “GPS is what everyone is using these days to find their way when traveling,” he explained.  “It is a network of about 30 satellites orbiting the Earth at an altitude of 12,600 miles. Wherever you are on the planet . . . “

Holding up my hand like a school crossing guard, I interrupted. “Not more technology!” Pointing to the reindeer in the pasture, I added, “These guys are all I need. They have never failed me.”

Shaking his head impatiently, Sledge answered, “True, but we believe that by using GPS you will be able to save time, allowing you to deliver more toys.”

“That may sound good, but can this device do what Vixen does? As the smartest reindeer, she handles all the instructions for getting to and landing safely on the roof of each home.”

“We are not looking to replace Vixen. We never want anything to happen to you like falling off a roof.”

“That’s good to know!” I exclaimed. Annoyed, I turned my back to the elves to watch my four-legged companions play.

Noticing that I was restless, Quentin tried to get the conversation back on track. “Santa, when you arrive in a city or neighborhood, I agree you should continue to rely on Vixen to get you from house to house. However, when you need to travel long distances between places, like over the oceans, mountains, or deserts, this system could shorten the time.”

Using more technology made me uneasy. I valued my reindeer more than the elves realized. Would this GPS make Blitzen faster, Donner stronger, or Rudolph’s nose brighter? I remembered the first time we landed on a patch of ice. All the reindeer lost control as they slid, except Dancer. Using his nimbleness, he managed to help all the others regain their footing. I would never replace any of my reindeer, but I also understood the need to be more efficient.

“Sometimes when we travel from one continent to another,” I pondered aloud, “we do not always end up where I need to be and that has caused delays.” Stroking my beard, I turned to look at Sledge and Quentin directly. “Are you saying that I would not have to use this GPS system all the time, but just for the long distances?”

Sensing I might agree, Sledge was quick to say, “That’s right Santa! You can use it when you need it and use Vixen and the team the rest of the time.”

“You know I’m not the best at some of this new technology. Do you think I will be able to learn how to use it, or will I need to bring an elf with me to help with the GPS?”

Sledge looked to Quinten who responded, “Santa, we can have your entire route programmed into the GPS. All you will have to do is follow the directions on the screen.”

“There is another benefit to using the GPS,” Sledge added wanting to sell me on their idea.

“And what would that be?”

“With the GPS we will be able to know where you are at any moment. If you need help for any reason, the E.L.F.S. (Effective Liberating Flight Squad) will find you faster.” Sledge paused for a moment to let me think about the E.L.F.S and added, “There is also a group called N.O.R.A.D. (North American Aerospace Defense Command) that tracks you. The GPS will make their reporting more accurate so that the parents are sure to get the children to sleep before you arrive.”

“Even if I do not use this GPS thing the way you want, I can see the benefits to the E.L.F.S. and N.O.R.A.D. Go ahead and install it. But, I’ll want to test it before the season gets here.”

Smiling from ear to ear, Quinten said, “You will not regret it Santa. We’ll get working right away and let you know when we are finished.”

As the elves rushed off without even saying good bye, I laughed and thought to myself, “I bet they were afraid I’d change my mind.”

Chuckling, I placed my right foot on the bottom rail of the fence surrounding the pasture. Resting both arms on the top rail, I was startled when Vixen snuck up on my left and nudged my elbow.

As she nuzzled my cheek, I slipped my arm over the railing and patted her head. “I love you too, Vixen. Don’t worry about this new technology. I doubt there will ever be a reindeer as smart as you. Besides, I don’t know what I’d do if I could not brag about you to the little girls. When I tell them your story, it encourages them to be whatever they want. Oh, and they love hearing how much smarter you are than the boys on my team.”

Vixen gave me a big reindeer kiss. Starting at my chin, she licked all the way up my face, stopping only when she got to the top of my forehead. I smiled and grabbed my handkerchief to wipe the reindeer slime off my face. Though technology could help with deliveries on Christmas, it could never replace the love and support of my reindeer.

To read more about Santa’s sleigh please check out: Santa’s Improved Sleigh, which was posted on March 16, 2020;