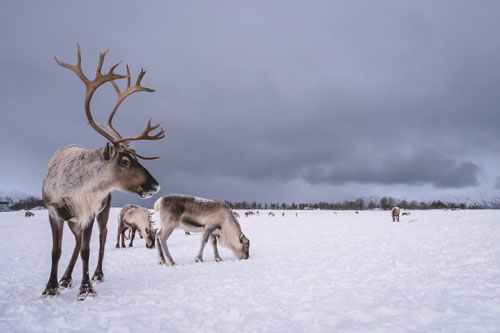 Entering the Dining Hall, Heart looked around the room. Spotting Santa and Ms. Claus having breakfast near the fireplace, she ran to their table. Short of breath, the elf paused and announced quickly, “Carter and Highstep need you at the mail reindeer pasture.”

“Tell them I’ll be over after we finish breakfast,” I responded taking a bite of my chocolate chip pancakes.

“The reindeer that pull the mail sleighs are having problems,” Heart insisted, “so I was told to bring you right away.”

“Well then I better get over there,” I said, wiping my mouth and hands with my napkin. Turning to face Ms. Claus, I added, “Since you oversee the Mail Room, if you have time, I think you should be included.”

As the two of us nodded in agreement, we stood and followed Heart out of the hall. Squeezing my hand, Anya said, “With the season beginning soon, the amount of mail the sleighs need to collect will be increasing, so I hope nothing too serious has happened.”

“I doubt it. You know how particular Highstep can be,” I explained. “As manager of the barn, he is so protective of the reindeer that you would think they were his own children.”

“I hope you are right, Santa,” Anya responded as we increased our pace.

Approaching the barn, I noticed Carter, superintendent of the Mail Elves, talking with Highstep while watching the reindeer. “What’s so important that Ms. Claus and I could not finish our breakfast?” I inquired.

The elves immediately turned and in unison said, “Santa,” then tipping their hats toward Anya, “Ms. Claus.”

“That’s not unusual,” I replied, interrupting his explanation. “Some reindeer stop believing as they get older.”

“Dear, I think Highstep already knows that,” Anya stated in a kind voice.

“Thanks, Ms. Claus, I do,” Highstep said, “and yesterday, I was sure that was the reason, but then today ten more reindeer couldn’t get off the ground.”

“Could there be an issue with the Red Fairy Dust?” I wondered.

Shaking his head, Highstep responded, “I was thinking the same thing. So, I contacted Gwendolen, the Queen of the Snow Fairies, to see if she might know why this last batch of dust could cause problems.”

“What did she have to say?” Anya asked.

“She assured me that all the different Fairy Dust they provided us was top quality.”

“Have you talked with Vetter?”

Carter pointed to several reindeer to our right. When I looked, I could see the vet checking some of the animals, as we walked toward her. “Morning Vetter,” I said. “Have you found anything?”

“I cannot find a thing wrong with these reindeer that would cause them not to fly,” she announced. Then looking at Carter and Highstep, Vetter asked, “Has anything changed in their routines?”

Shrugging their shoulders, the two elves stared at each other. “Nothing that we know about,” Carter responded.

“Have they been allowed to roam around outside our village?”

“Gaucho, Highstep’s newest reindeer herder, has been taking them out for a few hours each day. The lichen, which is their favorite food, is very plentiful right now,” Carter informed Vetter.

“I think we should talk with him. Is he around?”

A few seconds later a static sound came from the radio, followed by, “Be right there boss.”

When Gaucho joined the group, Vetter was the first to speak. “I understand you have been taking the reindeer out to graze on lichen the last couple of days.” When the young elf nodded, the vet asked, “Where?”

“Lichen Prairie as we always do, but the last two days I thought I would give them a treat and let them have some mushrooms and Sedge Grass before they are gone until next year.”

“I thought the season for those tasty treats was over, so where did you manage to find them?” I asked.

“Just on the other side of Polar Ridge,” the herder answered.

As we all fell silent, Ms. Claus nodded and spoke up, “You’re right, I was just walking there the other day and was surprised that so many of the mushrooms and grass were still there.” Anya paused and then added, “But you know, I also saw some Purple Saxifrage growing.”

Giving Ms. Claus a strange look, Vetter inquired whether the plants still had their flowers.

“Is it possible, Gaucho,” Vetter wondered, “that some of the reindeer could have eaten the flowers?”

“I’m not sure, but I did notice that a few of them headed in that direction. Why?”

Relieved, I gave a hearty laugh. “The flower of the Purple Saxifrage is a natural antidote for Red Fairy Dust.”

“When I need to keep a reindeer quiet because of an illness or injury,” Vetter explained smiling, “I give them a dose of the crushed flowers in their feed so they can’t fly. It’s my way of making sure they rest and get better.”

Highstep patted the elf on his back. “During the summer, I posted a warning not to take the reindeer over that ridge because of the flowers. Normally they finish blooming in August, so I took down the notice thinking it was safe again. Since you didn’t start till September, you would not have known that.”

“This is just another result of climate change that’s happening in our area,” I said stroking my beard.

“I agree Santa,” remarked Anya, “which makes it harder to keep track of certain plants. However,” she continued, “since I love walking on that ridge, I can let you know when the flowers are gone for the season.”

“Perfect, Ms. Claus,” Highstep said. “From now on I will leave the warning up until you tell me it’s safe.”

“Two days without any of those flowers to eat,” responded Vetter, “and the reindeer will be back to normal.”

Satisfied, I turned toward Ms. Claus and asked, “Now can we go back and finish breakfast?”

“Santa, Santa, Santa, what are we going to do with you!” Anya exclaimed, shaking her head and grinning. “As soon as the crisis is averted, you are right back to thinking about food. You’re a real pip sometimes, you know that?”

Thanking everyone, I took Anya’s hand, and together we strolled toward the Dining Hall. Hearing the elves chuckle, I whispered, “After all, Ms. Claus, keeping my Santa figure is important this time of year.”

I hope you enjoyed today’s story. I will post another story on December 1st. If you have any comments or if there is something you would like me to tell you about, please feel free to leave me a comment. Until next week . . .

One Reply to “Reindeer Scare”