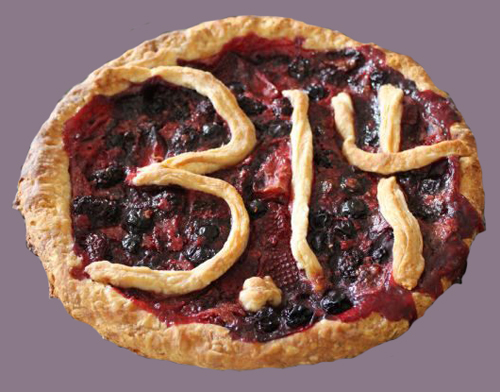 Finishing my breakfast of granola and yogurt, I was lost in thought about the areas I wanted to visit in the village.

“What do you have planned for today?” Ms. Claus announced as she entered the room, interrupting my daydreams.

“Nothing really urgent,” I responded as I pushed my chair back from the table. “As we gear up for the next season, I like to check things out in the North Pole Village.”

As I opened the door to leave, Anya reminded me, “Don’t forget that today is Pi Day, and the elves have several festivities planned. Have a good morning and I’ll see you at lunchtime.”

“That’s right! I almost forgot about it being Pie Day!” I said excitedly. “I bet Doheny will bake some of her best pies for dessert.”

Before leaving, I heard Ms. Claus ask, “What are you talking about? What do pies have to do with today?” I ignored her remarks and closed the door. “Always trying to get my mind off sweets, but not this time Anya,” I thought smiling to myself. “I plan on enjoying Pie Day!”

Walking toward the reindeer barn and pastures, I soon found Highstep and a couple of his helpers collecting the circular, hardened reindeer poop and putting them in a wagon. “What’s going on here?” I asked.

“Morning Santa,” Highstep said, looking up from his work. “We are collecting ‘Reindeer Pies’ for the Reindeer Chip Throw contest later today to celebrate Pi Day.”

“Since you’ve been gone on business for the past few years at this time, you probably don’t recall that Jonah set the record with a throw of 266 feet last year.”

“That’s quite a throw! But I prefer real pies that I can eat. After all that is why we celebrate Pie Day!” I yelled, turning to leave.

Surprised, Highstep and the other elves looked at each other. “Santa you know Pi is a special number that we use to determine the distance between the stars so you can find your way on Christmas,” Highstep stated before he realized I had left. The elves shrugged their shoulders and laughed. “Santa has such a sense of humor.”

After I left the reindeer barn, I walked through the courtyard. Noticing several elves throwing Frisbees, I asked, “You testing out a new flying disc or just having some fun?”

“We are practicing for the Pi toss later today.” After Wheelie measured the diameter of the disc and calculated the circumference, he gave me a strange look. “We use Pi to make sure the Frisbee is between 25 and 31 inches around,” he described, “so that the contest is fair to everyone.”

“You know, since college students used the tins from pies made by the Frisbie Pie Company to play catch, couldn’t you just use a pie tin to measure your flying disc?”

“Santa, you DO know the day is about celebrating P-i not p-i-e, right?” Wheelie asked.

“Sure,” I replied shaking my head and ignoring Wheelie’s spelling, “but how is that more important than eating a pie?” I wondered aloud. “You know pies are my second favorite food group, just after cookies and right before donuts. I’m looking forward to Doheny’s cherry pie to celebrate Pie Day.”

Startled by what I said, Wheelie dropped his Frisbee and turned to explain. Realizing that I had left, he stared at the other elves and asked, “Santa does know that we use Pi to determine the size of the wheels for the bikes, scooters, skateboards and other toys we make for the children, right?”

“I guess,” one of them answered. “You know Santa, always joking around when you least expect it.” Nodding, the rest of the elves laughed and continued to practice tossing their Frisbees.

Leaving the courtyard, I decided to see for myself what Doheny and the other bakers had set out for Pie Day. When I entered the hall, several tables revealed a wide assortment of pies: lemon meringue, strawberry-rhubarb, chocolate, apple, blueberry, coconut-cream and more that I could not identify. “Looks like I’m just in time,” I remarked searching for my favorite. Seeing Doheny, I asked, “Can I just pick the one I want and take it to my table?”

The bakery elf looked at me with a blank stare and responded, “What? No! These are for the pie eating contest later on today.”

“Contest?!” I asked, surprised. “No one told me about a contest. How do I enter?”

With a bit of a giggle in her voice, Doheny said, “Santa, you should know that the contest is just for the elves. We all know if you entered you would certainly win, given your appetite for sweets.” When she noticed a sad look on my face, she added, “I do have a cherry pie, your favorite, set aside in the back for you.”

Rubbing my hands together in excitement, I asked, “Do you think I could have some ice cream with it?”

“Of course, you can,” Doheny responded. “After you have your lunch, I’ll bring some out for you.”

“You sound like Ms. Claus,” I remarked smiling. “As a baker on Pie Day, I thought you would want everyone to eat your pies first. You know,” I continued, “The Frisbie Pie Company started it all on this date, so I guess it’s only reasonable to celebrate pie baking with a yearly contest.”

Doheny stopped what she was doing, and placing her hands on her hips, glared at me. After a few moments I asked, “What? Did I say or do something wrong?”

“Of all people, and the best-known toymaker in the world, I would think you knew that March is the 3rd month and today is the 14th day.” When I didn’t respond she added sternly, “3-1-4”

Shrugging my shoulders, I asked, “What? Is that the time of the contest?”

“Santa,” Doheny laughed shaking her head, “What are we going to do with you? Today is not a day to celebrate pies that you eat.”

“I don’t know what you mean! All the elves are preparing for games and contests involving pies,” I said. “So, what am I missing?”

Trying to figure out how to explain it to me, Doheny began. “Since the months of January through March are slow, the elves decided to honor the special number, Pi, on Pi Day, March 14th and do something fun. For the last few years, you have been away on business at this time,” she continued. “This year, however, you are home and can celebrate with us. Did you notice that all the games the elves are playing today are centered around things that are circular?”

“Well, how do you find the circumference of those items?”

Slapping my forehead with the palm of my hand, I exclaimed, “Duh! I was so intent on getting extra pie today that I never even thought about the math ratio that is used to determine the circumference of a circle.” Feeling my face turn red with embarrassment, I shook my head. “This unique number,” I persisted, “is used in almost all the toy workshops, and taught to every elf and child in math class.”

“Just as important,” Doheny added, “this special number is also used to determine the area of a circle so that the elves know how much material they will need to make toys like balls or even the heads of dolls. Scientists who work with planets, stars and the spacecraft that visit them find Pi invaluable, just like you do when planning your Christmas journey to various countries.”

“That’s okay Santa. We all get caught up in things that distract us from time to time.”

As Doheny and I continued to laugh, Ms. Claus walked over and smiled. “What’s going on you two?”

Doheny gave me a sly look and announced grinning. “I think it’s safe to say that today Santa is having his Pi and eating it to!”

Check out these stories about Doheny: