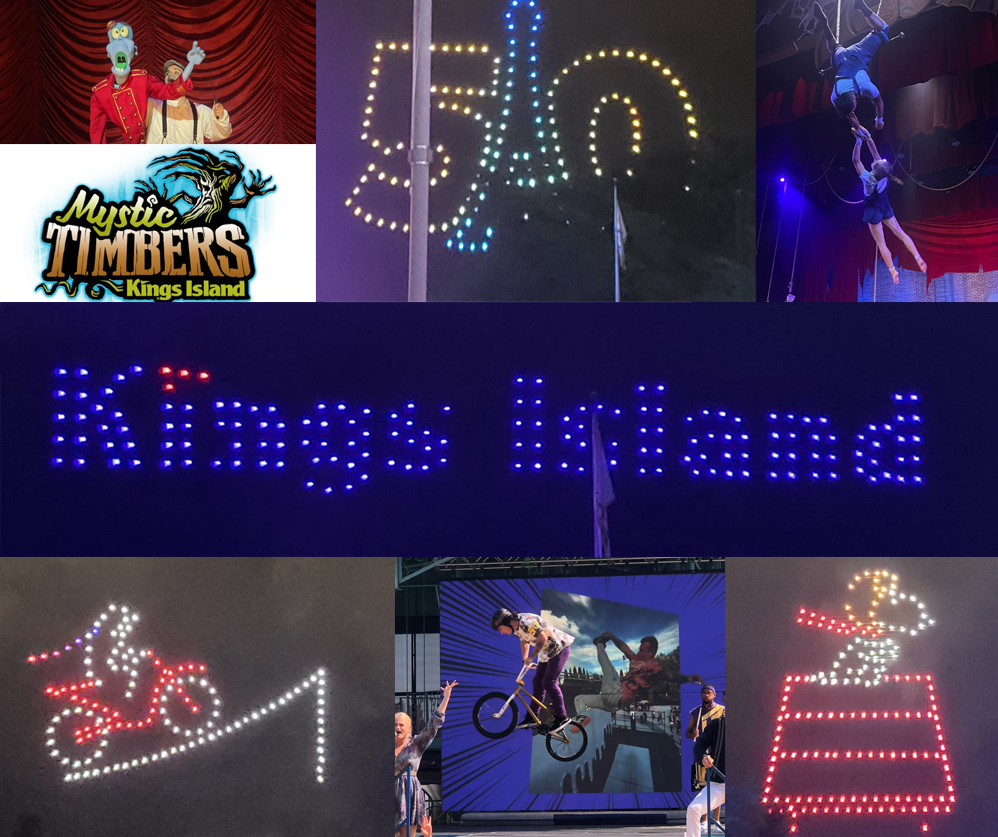 Walking hand in hand, Ms. Claus and I crossed the parking lot to the loud noises and brash sights of an unusual place. Twisted metal tubes painted red, blue, green, and yellow dazzled our eyes as we strolled through the entrance “Isn’t it amazing?” I asked Ms. Claus.

With a look of concern, Anya responded, “I thought we were going to Mason, Ohio. How did we end up in Paris? What is all that stuff around the Eiffel Tower?”

“HO HO HO, we are at Kings Island in Mason. That’s their 1/3 scale model of the Eiffel Tower, and all those curved strips of metal are coaster rides.”

“I know,” I responded. “Some of my J.A.T.S. (Jolly Assistants to Santa) from Cincinnati told me we should see the live shows and fireworks celebrating Kings Island’s 50th Anniversary. Now that we have arrived, I think we should begin our day at the theater.”

“What fun!!” my wife responded as I grabbed her hand.

Hurrying towards the show house, we arrived in time to find our seats before the hall darkened. An odd-looking usher with no legs began floating around and began talking. “Welcome to Kings Island Theater,” he announced. “Phantom Theater was once a popular dark ride where they mimicked the end of live theater and the rise of movie theaters. Tonight, we have brought the characters from the ride to life for this show. So, sit back and enjoy the performance.”

When the curtain rose, Ms. Claus and I watched as the characters danced and sang. “I wish I could get you to dance with me like that,” Anya whispered.

Patting her hand, I spoke softly in her ear. “That will never happen, my dear. Instead, you’ll have to be happy with sleigh rides.”

“That’s one thing I’ll never get tired of doing,” Anya replied giving me a kiss on the cheek.

As the show continued, we were impressed with the costumes, the music, and the comic routines. When the show ended, we stood up and clapped. “What a performance!” I exclaimed.

“I’d like to see the ‘Off the Rails show’,” I answered. “If we hurry, I think we can make the next performance.”

By jogging, we arrived on time. Out of breath, we took our seats in the stands before the stage exploded with activity. Gymnasts bounced on trampolines. Other performers rode bikes or scooters, and some even skated. Startled, we watched them jump from one half pipe to another over part of the stage.

When one of the bicyclists did a complete flip in the air between pipes, I looked at Anya and exclaimed, “Did you see that? I never thought someone could do what he did on a bike.”

Before Ms. Claus could reply, a rider took off on his scooter and in mid-air, spun it around in a complete circle. Then he managed to get his feet back on it before landing smoothly on the next half pipe.

Excited, Ms. Claus pointed to the guys on skates. “They make it look so easy gliding down one runway and up another.” We continued to watch as an eight member drum corps stunned the audience with their skillful drum stick movements. “They never missed a beat,” I said shaking my head. “Fantastic!” When the show concluded, the crowd gave all the performers a standing ovation.

“I wish the elves could see how these youngsters and 20 somethings are using the bikes, scooters, and skates they make,” I told Anya as we exited the grandstand.

“I think we might be better off if they didn’t.” Looking at my surprised face, she continued, “If they saw them perform, the elves would not stop until they got their own bike-skate park. You would never get any work out of them.”

“You’re probably right. But I believe if they saw their skills, it might challenge them to be more creative when making future bikes, scooters, and skates,” I explained.

While wandering further into the park, we rode the swings, the Carrousel, the dodgems and even took a ride on the train. When I spotted Mystic Timbers, however, I was intrigued. “How about going on that coaster with me before the fireworks begin?” I asked Mrs. Claus.

“Humm, I’m not sure,” Anya replied when we entered the line. “I might live to regret this.”

Giving her a hug, I smiled. “Maybe, but if you don’t try it, you’ll never know what it feels like to ride a wooden coaster at 53 MPH. Where’s your spirit of adventure?”

Thirty minutes later, we climbed into our seat. Struggling to get the bar in place, I heard the attendant laugh. “Better suck it in Santa, or give up eating all those cookies,” he teased as he pushed the lap bar down which clicked and locked.

“I’ll remind him about that around Christmas,” Anya called out as the rollercoaster started to move.

Climbing to the top of the track was quick. Then the coaster sped down a huge curved hill before going up a second one. Heading into the thick woods at a constant speed, the coaster twisted from side to side on a banked, curved track. When the ride abruptly stopped, the train was sitting in front of a shed. As it crept inside the shadowy darkness, many people on the ride began to scream, and I felt Anya grab my arm. What came next was straight out of a haunted house.

“What did you think? FUN! I can’t wait to tell the elves.”

Giving me a strange look, my wife sighed. “Fun for you, yes; for me, not so much. I kept shutting my eyes, especially at the end. But I am betting the elves would have a blast.”

Suddenly a crackle of an announcement came over the park’s speakers. Kings Island Fireworks will begin in 15 minutes. “Come on Santa,” Ms. Claus yelled, “This is what I love. Let’s find a good place to watch.”

After a brisk walk, we ended up by the fountain on International Street where Anya sat at one of the tables. “Settle down Santa and stop being so fidgety?” she said as I kept looking up at the sky.

Just then a loud bang from the first starburst echoed. “There! Behind the Eiffel Tower!” I exclaimed Snatching Anya’s hand, we moved to an open space for a good view.

Suddenly, to the right of the fireworks, dozens of blue lights appeared. Darting through the sky, they spelled out ‘Kings Island.’ Moving again and changing colors, the drones formed a gold ‘50’ with a blue Eiffel Tower between the numbers.

Shifting our eyes from the fireworks to the drones, Anya and I watched as the image of a giant Snoopy walked to the left and turned into another Snoopy atop his dog house flying to fight the Red Baron.

When the entire display ended, I stood there staring at the dark sky. After a few minutes Ms. Claus nudged me. “Dear, I think the show is over.”

“I’ve never seen anything like this, before. What Kings Island did with those drones was astonishing. I can’t wait to show the elves the video I took of them. I bet they never thought anyone would be able to do that with the gadgets they create.”

Strolling to the exit, I slipped my arm over Anya’s shoulder. “I’m glad there are places like Kings Island. It has a bit of magic to it where the child in grown-ups has a place to get out and play for a day.”

“Just like you did today,” my wife said with a broad smile.

I hope you enjoyed today’s story. I will post another one in two weeks on Thursday  September 15th. If you have any comments or if there is something you would like me to tell you about, please feel free to leave me a comment. Until next then . . .

To read more about Santas Summer visits please check out: