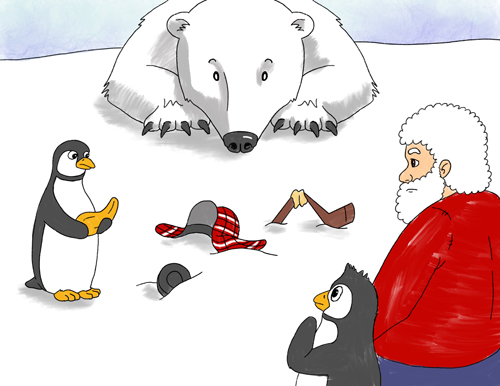 Grabbing my coat from the candy cane rack, I heard Ms. Claus yell from the other room, “Where are you going? You haven’t had your breakfast yet.”

“No time. That Space Hurricane lasted about eight hours last night, and I need to go outside to check the damage. I’m meeting Bernard and some of the elves by the West Entrance,” I explained while Anya helped me put on my coat.

“Hopefully nothing has happened that can’t be fixed,” she replied, giving me a quick kiss.

Heading down the hallway towards the West Entrance, I caught up with Bernard by his office.

“Morning Santa,” he said. “I contacted the crew just in case we need to make any repairs and was just heading there to meet them.” Slipping on his coat and hat, he sighed. “That was some storm last night.”

I nodded in agreement as we walked quickly, both of us concerned about possible damage to the village.

Reaching the entrance, Bernard and I saw the repair crew gathered around Polar Pete, who had laid something red on the snow. “What do you have there?” I asked.

“That’s why I was coming to see you. This is Nippy’s hat!” he exclaimed.

“Must have lost it in the storm last night,” remarked Bernard as he picked it up.

“I’m afraid he may have lost more than that,” Pete said with concern.

“On the way over here, I ran into Wiggle and Waddle, the penguins from the South Pole, and they were about to retrieve something they saw in the ice pond over the ridge that looked like Nippy’s arms. Pete turned and pointed to the ridge.

“Hmm, this doesn’t look good for our friend Nippy,” I mused. Turning suddenly, I divided up the repair crew into two groups. “Bernard, you work with this team of elves and check out the village for possible storm damage. The rest of us are going to catch up with Wiggle and Waddle and see what they found.”

Nodding in agreement, Bernard and his crew headed toward the village while Polar Pete and I led the remaining elves toward the ridge. “I hope our friend isn’t hurt,” I muttered. “I could not bear the thought of something happening to Frosty’s cousin.”

As we reached the ridge, Polar Pete pointed towards the frozen pond and yelled, “Look Santa!”

I turned to see what had Pete so excited and noticed Wiggle and Waddle dragging Nippy’s arms behind them.

Making their way up the slope, the two penguins soon laid the hockey sticks, that once were Nippy’s arms, on the ground in front of us.

“I’ve seen enough!” I exclaimed. “Nippy is in big trouble. Wiggle and Waddle, did you find anything else that belonged to our friend?”

“No Santa, we didn’t. Except for the hat Polar Pete found, this is what remains of Nippy,” Wiggle explained as he began to cry.

“Now, now,” I said patting Wiggle on the head, “Let’s not give up hope yet. Since Nippy’s arms and hat were discovered in this area, I bet we can find more.”

“Whatever you want us to do, we are ready,” Polar Pete bellowed.

“Scooter can you go back to the village to get Vetter, our veterinarian, as well as Dior, our elf doctor. Though neither one of them had ever taken care of a snowman, I felt sure that they could help Nippy if he needed medical assistance. “The rest of us should spread out and look for anything that we know Nippy wears and bring whatever we find back here.”

After Scooter left, everyone scattered and searched the area. Before walking down the slope, I heard one of the elves yell, “Got something.” Pulling out the yellow squash, that was Nippy’s nose, from the snow, he waved it in the air for all to see and brought it over to lay in the pile with the hat and hockey sticks.

“Found Nippy’s eyes,” another elf called out as he walked up the slope and placed the coal lumps with the rest of what once was Nippy.

Slogging down the slope, I noticed something black in the snow and realized it was one of Nippy’s buttons. Picking it up, I looked carefully around where I was standing and soon found the others. Slipping them into my pocket, I trudged onward towards Polar Pete who had his nose in the snow. When I reached him, his paws had removed the snow from around a large, white ball. “This is definitely Nippy’s bottom part,” he said as we pushed it up the slope where the rest of the snowman’s parts were gathered.

Then Pete and I turned as one of the elves shouted, “I think I found part of Nippy.” With the help of his partner, the two pushed away the snow to reveal Nippy’s scarf still attached to another ball of snow. Lifting it, they carried what appeared to be Nippy’s head up the slope. All of us were surprised to see that his mouth had remained in place.

No one said anything, and I understood why. Speechless, I stood in shock at all the parts that once were Nippy lying on the ground in front of us. “Unlike all the King’s men and horses in Humpty Dumpty, I’m sure we can put Nippy back together again,” I responded as the two doctors arrived.

Vetter looked at Dior, hoping he had an idea. When he didn’t respond, she said, “I’m not an expert on snowmen, but if Nippy is like Frosty, I believe once we rebuild him and place his hat on his head, he should come back to life.”

Wiggle and Waddle agreed and centered the bottom ball of snow using their flippers to smooth the surface. Suddenly, without a word being spoken, everyone joined the penguins. When the smaller ball of snow was placed on the larger one and the hockey sticks were added, the group cheered in hopes that their friend might come back to life.

Taking the buttons out of my pocket, I gave them to one of the elves. Arranging them carefully down the center under Nippy’s scarf, the elf then took the coal and placed them in the area where Nippy’s eyes had been.

After Pete added the yellow squash on for his nose, I broke the silence, “His nose curved down not up.”

Dior agreed and twisted the squash so that it was placed correctly.

After several minutes Vetter spoke. “I guess all that’s left to do is put his hat on and see if it will bring him back to life like Frosty.”

“Pete, as Nippy’s best friend, I think you should be the one to put it on,” I said as I picked the hat off the ground and handed it to him.

Standing in front of his friend, Pete pulled the hat over the snowman’s head. “Keep your fingers crossed.” Making sure the ear flaps were down the way Nippy wore them, he took a couple of steps back.

The next ten seconds seemed like hours as Nippy slowly came to life. “What are all of you doing here?” he asked surprised. “Did I miss breakfast?”

Everyone cheered in delight at the sound of Nippy’s voice. After they all calmed down, I asked Nippy, “Do you remember the storm last night?” 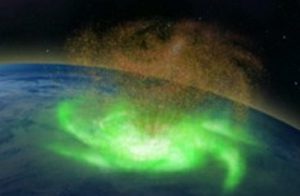 “With the Space Hurricane, the Northern Lights were the most beautiful I had ever seen before!” Nippy exclaimed. “But the winds created from the hurricane blew so much snow that I could hardly see anything in front of my face.”

“Why didn’t you find a place to get out of the storm?” Polar Pete wondered.

“I was trying to find the West Tunnel entrance when I fell down a hill. The next thing I remember is waking up here with all of you staring at me,” Nippy explained as his mouth turned into a smile.

“Well, I’m sure we all agree that you gave us quite a scare, but we are happy that it worked out in the end. I don’t know what we would do without you,” I said looking around at everybody nodding in agreement.

“Promise that the next time a storm like this comes through, you find shelter before it actually starts,” Pete demanded.

“I will,” Nippy began. “I am so lucky to have friends like all of you. I will try not do anything to make you worry again!”

We all gave Nippy a hug and headed back to the village. Entering Santa’s Village, Bernard’s repair team immediately came over, surprised to see Nippy. After hearing the story, the elves gave the snowman a big hug.

As they began to return to their chores around the village, they heard Nippy yell, “Hey, I had a rough night. What about breakfast?”

Polar Pete laughed and put his arm around his friend. “That’s the Nippy I know and love. Always looking for his next meal!”

To read more about Nippy, Polar Pete, Wiggle and Waddle please check out these stories: