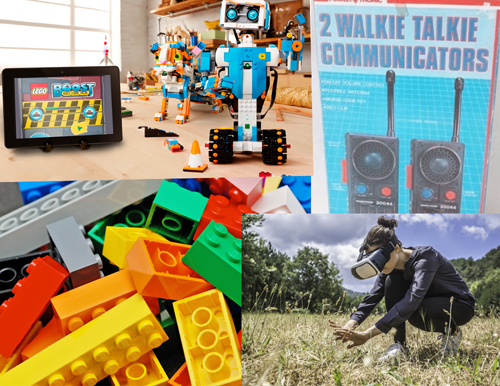 “Ready for your meeting today?” Ms. Claus asked as we walked through the mailroom.

“Yes, but concerned,” I answered as my wife opened the door for me. “You see, I don’t want the elves getting the wrong impression. As much as I appreciate all the video games they make for the children, who love them, I think we need more toys to help girls and boys become more active and play with others.”

Ms. Claus nodded, “I agree, many of the electronic games and cell phones don’t encourage physical activity or getting together with friends.” Giving me a quick kiss, Anya smiled and added, “I know the elves will listen when you explain how you feel. They’re always looking to do the best for you and the children.”

Walking toward the conference room, I thought about the hard work all the elves at the North Pole put into making Christmas 2020 a success. Now many of them were returning to their homeland in Lapland to visit their relatives during our down time before production begins in June. Bernard and I had worked out a schedule earlier that left enough elves at the North Pole to make any changes that might be needed in the workshops.

As I opened the door to the conference room, a loud applause broke out when Bernard and the supervisors of my fourteen toy workshops stood up and began cheering. I motioned for them to sit back down with my hands and said, “Thank you for that, but it is your hard work that we should be applauding.”

Bernard remained standing, grinned, and said, “Santa, I think I speak for everyone here when I say that without your leadership none of this would be possible.”

“Thanks Bernard, but I believe if we did not work together as a team, Christmas might not happen. This meeting, however, is not about 2020; it is about preparing for next Christmas,” I explained taking my seat.

As all the elves nodded in agreement, Bernard remarked, “So what’s on your mind, Santa?”

“Glad you asked,” I said while looking around the table at the happy faces of my managers. “Yes, 2020 was a success, but as all of you know so well, the corona virus kept people in their homes. Since many schools held virtual classes, the children didn’t get a chance to have fun with their friends.”

“You are right, Santa,” Bernard announced as many of the elves nodded. “The children stayed inside and when not on their computers for school, they played video games, watched TV, or were glued to their cell phones.”

Realizing that the elves understood, I continued with my plan. “I was hoping we could develop toys that would encourage the children to get away from the TV and computer screens, play with others, and go outside more.”

The Building and Construction workshop manager raised his hand. “I have an idea Santa,” Girder said standing up. “Ever since we introduced Lego Bricks back in 1949, they have grown in popularity. Now I see Legos going in a new direction. With all the interest in robots lately, I want to develop the Lego Boost Creative Toolbox.”

“Just what would that be?” I asked Girder.

“The children would be able to build robots out of Legos and then program them on their tablets. Using what they have learned in school and their skills, they could make almost anything they can imagine.” While everyone else talked among themselves, Girder added, “There’s just one problem.”

“What is that?” Bernard asked.

“Well since it involves electronics, which is Fizzlepop’s workshop, my team would need to work with them to make this new toy a possibility.”

Excited, Fizzlepop responded without hesitation, “I think this is a great idea. Working with Girder and his crew on the project would be fun!”

“I love how all of you work together on projects!” I exclaimed. As the two elves grinned with pride, I added another challenge. “You know, since video games are so popular, could we create some that get the children outside and moving?”

“What do you mean, Santa?” asked Frolik, manager of the Sports & Outdoor Play workshop.

“Back in the 70s walkie talkies were very popular. The children would run all over the neighborhood just to see how far away they could get and still talk with each other. That led to the children doing more exploring. They had so much fun using the walkie talkies back then,” I explained. “Now imagine using today’s cell phones to connect kids to the outdoors.”

Frolik shrugged his shoulders and said, “I’m not sure what you mean. We don’t make cell phones because you and Ms. Claus believe that parents should decide when a child gets a phone.”

“You’re right!” I interrupted. “But what if there was a device similar to a phone or a walkie talkie that had maps of the area and rewards or goals programmed into it. Then, let’s say you had something like a scavenger hunt, where individuals or teams would have to read clues and look for the things hidden within the landscape around them. This could encourage friendly competition to see who could find it first, or they could work together to find the treasure.”

Fizzlepop scratched his head. “I think I see what you are getting at,” he remarked as he looked across the table at Frolik. “Santa wants a game that puts children outside working with others. The possibilities are endless!” he exclaimed.

Smiling, Frolik added, “I see kids exploring their neighborhoods or discovering nature. They could ride bikes and scooters or be on foot. It wouldn’t matter as long as they worked as a team. I like that Santa.”

“And here’s another idea,” I announced loudly. “What about using Virtual Reality and merging it with the real world? Kids would see everything just as they would without the headset, but with the addition of virtual things or people.”

“YEAH!” Frolik hollered. “They could even play team games like soccer! The VR would provide the ball and other players, making it feel like you were playing in a real game!”

The conference room exploded with enthusiasm. Elves began sharing ideas of what they would like to do virtually as well as what would work for children. Finally, Bernard stood to quiet everyone down. When all the talk stopped, he said, “Santa, from the excitement in the room, I think you have challenged the elves to get the children outside, while still letting them play their video games. But I am not sure we have that technology yet.”

“Maybe not, but if we want to develop toys like we have talked about today,” I reminded them, “then we need to create ways for the children to have fun while exercising their bodies as well as their minds.”

“Santa,” Quinten, head of Research and Development, began, “I think my department would be proud to work with the other elves. These ideas may not be created right away, but I’m sure with all of us working together, they could eventually become reality.”

“I am counting on that!” I said loudly with pride. “Use your elf magic and imagination and make it happen. After all, if we put the right toys in the hands of children, they will be able to learn while being active.”

“And by interacting with others it will be fun,” Bernard exclaimed as he jumped out of his chair. “Who knows, maybe it will lead to making school more fun as well.”

NON-ENDORSEMENT – Reference to any specific company, products, processes, or services by trade name, trademark, manufacturer, or otherwise in this blog, on the Website, or Online Profiles does not necessarily constitute or imply its endorsement, recommendation, or favoring by Cincy Santa.