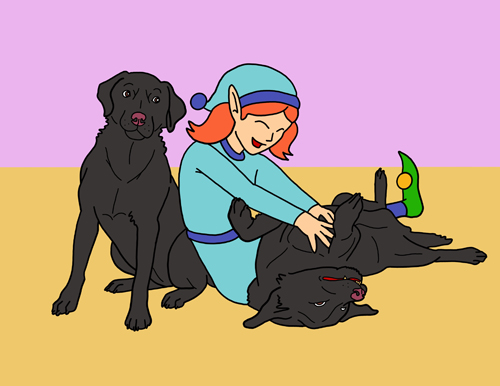 Entering the village, Ms. Claus began to take her scarf and hat off after having gone on a long walk outside. Grabbing my arm with both hands she said, “It was so good to see Polar Pete today.”

“I agree,” I responded. “It was surprising to learn how many polar bear cubs were born in the last couple months.”

“Pete was excited. He had so many plans for them once they begin leaving their dens in March and April.”

“He’ll be a great teacher too . . .” Turning suddenly to the right, I stared in the direction of the reindeer barns.

“What is it Santa? Did you see something?”

“Anya, I thought I saw a couple of baby reindeer, but that can’t be because they are not usually born until May and June,” I said scratching my head.

“What made you think you saw baby reindeer?”

“All reindeer are born with black fur, and I could swear I saw two of them run alongside the barn.”

“Maybe it’s just that your eyes have not adjusted to being inside yet,” Ms. Claus suggested.

“You’re probably right. Do you mind if I go over and talk to Highstep, just to make sure? As head reindeer herder and caretaker, he should know what’s going on.”

“Not at all. I have a few things I need to take care of in the mail room with my assistant Sophia. I’ll see you for dinner.”

“Sounds good,” I responded as I headed toward the reindeer barn.

Heading toward Highstep’s office in the back of the barn, I checked every stall, but did not see any babies with their moms.

“Have any of the reindeer given birth recently?” I asked Highstep as I entered his office without even saying hello.

“Hi Santa. Good to see you too,” Highstep responded with a little sarcasm.

“I’m sorry, but I thought I saw a couple of baby reindeer outside and was hoping you would tell me I wasn’t seeing things.”

“Not sure what to tell you, but none of the reindeer have given birth yet. It’s still too early for that. What made you think you saw baby reindeer?”

“Ms. Claus and I were coming back from a walk when I caught a glimpse of two small black animals out of the corner of my eye. By the time I turned to see, they were gone,” I answered with some concern.

“Well I’m positive you did not see baby reindeer. Maybe you should check with Bernard. He may know something.”

“It was probably nothing but my imagination from being outside for so long. I think I’ll just head home. Sorry for barging in on you,” I apologized.

“Not a problem. You are always welcome anytime,” Highstep responded as I walked out closing the door behind me.

Walking through the courtyard, I could not get my mind off of what I thought I had seen. Stopping near the fire ring, I spun around looking in all directions to see if the mystical creatures were anywhere. Convinced that I did not really see them, I headed toward our place again, when Lyra ran past me. Not looking where she was going, Lyra bumped into me, almost knocking the two of us down.

“Whoa there Lyra,” I shouted putting my hands on her shoulders. “What’s the hurry?”

“I lost something and was trying to find them, uh . . . it,” she answered, as she avoided looking at me.

Not removing my hands, I asked, “What do you mean them? Are some of your elf friends lost?”

Turning around, I was immediately relieved. I now knew I was not seeing things earlier. Relieved, I turned to face Lyra and demanded, “What are those dogs doing here?”

“I can explain Santa, but I need to catch them before they disappear again.” Before I could say anything, Lyra was running toward the two black Labradors.

It did not take her long to grab the dogs and put them on their leashes so they could not run away. As she approached me with dogs in hand she said, “Santa, meet Mattie and Crosley.”

Bending over to pet both of them I asked, “Where did you get them? We don’t keep dogs at the North Pole.”

“Remember when you decided not to deliver pets to children as Christmas presents anymore?”

“I do. This past Christmas, when a puppy managed to get out of my bag and fell from the sleigh, Bernard and I made the decision not to leave pets as presents anymore. Luckily, my reindeer team was able to maneuver so that we caught the pup before he fell all the way to the ground. It’s just not safe anymore. But what does that have to do with Mattie and Crosley?”

“Well these two dogs were left here after your decision not to deliver pets anymore.”

“We made arrangements for all the pets left over to be adopted by loving families. How did we miss these two?” I asked.

Lyra leaned down toward the dogs and muttered, “I hid them from you.”

“I said, I hid them from you.” Sensing I was not happy with her answer she continued, “They were just so sweet and cuddly. I could not stand to see them leave when I could take care of them.”

“That’s understandable Lyra, but this is no place to have pets. I’m afraid we will have to find someone to adopt them,” I stated as I knelt down and began rubbing their ears.

“Santa please let me care for them? If they become a nuisance or get in the way, then you can have them adopted, but at least give me a chance to prove I can take care of them,” she pleaded.

As if on cue, Mattie began licking me. “See how loving they are? That’s why I could not let them go,” Lyra said making the most of the moment.

“Lyra, if I let you keep them, I will expect you to be sure they stay out of trouble.”

“Oh, I will Santa. I will!” she said with excitement.

“That means you have to clean up any messes. No one wants to get dog dirt on their shoes. And you need to keep their beds clean, their fur brushed, and their toe nails clipped.”

“You can trust me Santa. I won’t let you down!”

“Ok, you can keep them for now. If you let me down, though, you will have to give them up for adoption. Agreed?”

“Agreed!” Lyra exclaimed. Then she ran off with Mattie and Crosley in tow, their tails wagging.

Leaving Lyra to her dogs, I walked homeward wondering if she could handle both dogs. “I’m home,” I hollered as I entered our place.

“In the kitchen,” Ms. Claus responded.

“Did you and Sophia finish in the mailroom?” I asked entering the kitchen.

“We did, thanks. Highstep have any ideas what you might have seen today?”

Walking over and giving Anya a hug from behind, I said, “No, but I did figure it out. Turns out that when we stopped giving pets to children, Lyra decided to keep two black labs for herself.”

Turning to face me she asked, “What? Are you going to let her keep them?”

“Anya, I hope I didn’t make the wrong decision, but I told her that if she took total responsibility for them, she could keep them. However, Lyra also understands that if she lets me down, they will have to be adopted like all the others.”

“You are such a softy, Santa,” Anya said giving me a big hug. “But that’s part of what I love about you.”