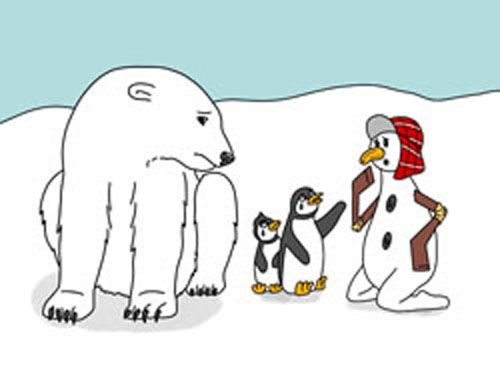 Taking our usual walk for the day, Ms. Claus and I wandered towards the hillside outside the village. As we made our way around a small snowbank, Anya and I found Polar Pete and Nippy lying on the ground. “Good morning!” I exclaimed, happy to find my friends.

Though neither one of them moved or spoke, Anya invited them to join us on our walk. “The morning is so calm and beautiful it would be a shame not to enjoy hiking and exploring beyond the village today.

Knowing how much Nippy and Polar Pete loved discovering what the morning had to offer, I was surprised when Nippy rolled over onto his back and looked at us. “We don’t feel like doing anything anymore.”

Surprised, I sat next to Nippy and shook my head. “That does not sound like the polar bear and snowman I know. How can we help?”

“Not even Santa can bring someone back,” Nippy responded as he sat up.

“That’s right Nippy,” Pete said as he sat on his hind legs. “Once a friend is gone, they are gone forever!”

Observing the two buddies, Anya stood up suddenly and exclaimed, “Santa, I think I know what’s going on! Polar Pete and Nippy miss Wiggle and Waddle!”

“They were so much fun to be with!” Pete exclaimed.

“You could always count on them for a good time!” Nippy added.

Understanding the problem now, Anya explained, “You know just because someone moves away does not mean they are gone for good. Besides you still have each other.”

I smiled at Anya, then looked at the pair on the ground. “What if I told you I could fix this for you?”

Both our North Pole friends perked up as they stared at me, waiting for an explanation.

“First,” I began, “you need to remember that Wiggle and Waddle returned to the Antarctic because they longed to see their family and friends.”

“It would not be right to have them come back here,” Anya added. “They belong there.”

“If they can’t return, how can you help us?” Pete demanded.

“Simple. How did the penguins get home?”

“We took them back in your sleigh,” Nippy answered.

Suddenly Polar Pete began getting excited, jabbing at his buddy. “I get it! Don’t you see Nippy? Santa is going to take us there to visit with them!”

“Of course, I’m going too, right Santa?” stated Anya as she winked at me.

“Absolutely! Let’s find Highstep,” I answered, grabbing her hand as the four of us ran down the hill toward the reindeer barn.

Within the hour, Highstep had my sleigh ready for the journey to Antarctica. “Let’s make this happen,” I yelled giving the reins a snap. The reindeer snorted and galloped along the ground until the red fairy dust took effect. As the team raced across the sky, the four of us settled into our seats. “Look out Antarctica, we’re coming your way!” Polar Pete bellowed as the rest of us cheered.

A few hours later while approaching the southern continent, Nippy became worried. “How will we be able to find them?” he asked.

“That’s a good question,” Ms. Claus began. “They all look the same.”

“Giving Anya a pat on her knee, I responded. “We are going to land in the same area where we left them; then all we have to do is wait. I figure Wiggle and Waddle miss us just as much as we miss them, and when they see the sleigh land, they will come running . . . or should I say waddling.” The four of us laughed as I pointed to our landing spot. “Let’s go down.”

Once on the ground, we all climbed out of the sleigh. “I’m pretty sure that is their Colony there,” I informed the group as I leaned up against the sleigh. “If I’m right, and they saw us land . . .”

Nippy and Pete began jumping up and down as they spotted the two penguins. “Look! Here they come!”

Watching Wiggle and Waddle sliding their way toward us, I yelled, “Come on, let’s go meet them!”

Being the fastest, Pete charged across the ice and snow. After the three of them embraced each other, they soon rolled around in the snow. Then, Nippy shouted, “Wiggle – Waddle!” as he arrived, wrapping his hockey stick arms around them.

Finally reaching the group, Ms. Claus and I warmly embraced the two penguins. “We certainly have missed both of you!” exclaimed Anya. “What a treat to see you and….’’ Before she could finish, two additional penguins shyly appeared.

“Wiggle and I were just talking about how much we miss everyone at the North Pole as well,” laughed Waddle as he and his friend scooted next to the other two penguins.”

Even though Polar Pete, Nippy, Ms. Claus and I knew that finding mates was a big reason for Wiggle and Waddle’s return to Antarctica, we were still surprised to see the four of them together.

“I’d like you to meet two special penguins,” said Waddle proudly. “This is my mate Chilly, and this is Sadie, Wiggle’s mate. Chilly, Sadie, this is Ms. Claus, Santa, Polar Pete, and Nippy, our friends from the Arctic.”

“It’s so good to finally meet the four of you. The boys have told us so much about you,” Sadie said.

“We feel like we already know you,” Chilly added.

“By the way, I am glad you showed up during the half-light of day instead of total darkness which will occur in a few hours,” Wiggle explained. Leading us away from the rest of the colony towards a mound of snow and ice, he ducked into an ice cave and the seven of us followed. Settling down away from the wind and cold, we spent several hours telling stories, laughing at funny tales, and catching up on what everyone had been doing since we last saw each other.

By the time we had finished our visit, darkness covered the area. Clicking a button on my belt, I was able to provide a lighted path toward the sleigh, enclosed in a protective covering. While saying our goodbyes, I announced, “Since we missed you as much as you missed us, this won’t be our only visit.”

As everyone cheered and hugged one another, my wife smiled. “This has been a wonderful time. Now we know that friends don’t stop being friends just because they move.”

Getting into the sleigh, the four of us found our seats in spite of the wind and swirling snow. Then I guided the reindeer toward a clear spot. Within moments, we were in the sky waving and shouting our goodbyes, knowing that returning to Antarctica in the future would certainly happen.

I hope you enjoyed today’s story. I will post another one on July 15th. If you have any comments or if there is something you would like me to tell you about, please feel free to leave me a comment. Until next week . . .

To read more about Nippy, Polar Pete, Wiggle and Waddle please check out these stories: