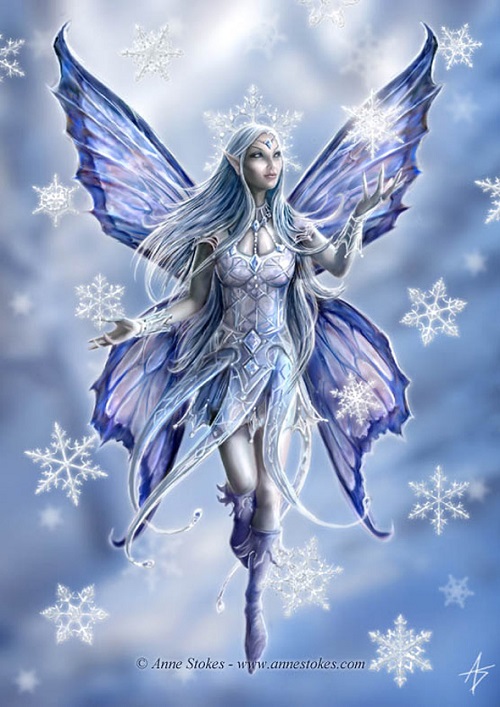 I sat at my desk with a stack of letters in front of me, sipped a cup of Judy’s famous hot cocoa and nibbled on a cookie. The first letter was from Connor, who was excited about his recent graduation from kindergarten. I was interrupted by a knock on my door.

As the door squeaked open, Geordie stuck his head in. “Would you have time to talk Santa?”

“Why of course Geordie, come on in and have a seat,” I replied moving from my desk towards the couch. “What can I do for you?” I asked offering him a cookie. “Is this about the Fairy Dust Box?”

The other day, Geordie, while helping to clean my office with Ms. Claus, moved my Fairy Dust Box. Later when I was looking for the box, I could not find it and thought it was lost.

“Well… not exactly.  I’m curious about how you met the Snow Fairies and learned about the Pixie Dust.”

Crossing my legs, I settled back into the corner of the couch. “Long before I started working with the elves or fairies,” I began, “I walked from house to house to make the deliveries. As time went on, I wanted to visit more homes with gifts and started riding a white horse.”

“You didn’t have a sleigh then?” Geordie asked.

“Not at that time. I knew I needed something better than a horse though.”

In the early 1500s, the number of children and homes had grown too large for me to visit in one night on horseback. I needed help. That’s when I called on my friend, Leonardo De Vinci, a well know inventor, scientist, and artist. He agreed to help me solve my delivery problem.

“At the time Leonardo was working on man’s ability to fly like the birds. He thought that if we could find eight strong, fast reindeer to pull a sleigh, they may be able to get it going fast enough to fly through the air.” Stopping, I leaned in with a grin and added, “That’s when Leonardo suggested that we travel to Lapland, Finland, where some of the strongest and fastest reindeer lived.”

Perking up with excitement, Georgie said, “That’s where you met the elves and soon after we became part of your team!”

“That’s right.” After taking a sip of my hot cocoa, I continued, “Leonardo worked for a few weeks applying all kinds of weird, wing-like structures on the sleigh and reindeer, trying to get them to fly. However, with all his efforts, the sleigh only floated about two feet off the ground for ten seconds. And that was without loading any toys in it!”

“Leonardo immediately began modifying his plan. I was worried he would not succeed. Then one night, when I was about to give up and return to the North Pole, Bernard approached me with a suggestion. Things at the North Pole would never be the same again.”

“Santa, I’ve been watching you and Leonardo working to get your sleigh to fly,” remarked Bernard as we sat by the fire.

“If you have a solution, I would love to hear it!” I snapped putting a log on the fire.

“It’s not exactly a solution, but it could lead to one,” he explained slowly.

As I stroked my beard and nodded my head, he began to enlighten me. “A special group of fairies live in a place, deep in the Artic, called Ferrishyn. I think they may hold your solution.”

“I’ve run into fairies on the mainland before, but none of them ever spoke of Pixie Hollow,” I answered. “Do they use wands or spells to make magic?”

“Neither. They use Pixie Dust.”

As Bernard was talking, I noticed a small red light float around the room. Pointing to it I said, “What is . . .”

Bernard answered before I finished asking. “That’s a Snow Fairy. When they fly, they glow red. This is Queen Gwendolen. I invited her here, hoping she might be able to work with you to solve your delivery issue. Would you like to meet her?”

I had no sooner finished talking when the red light floated down to the table between Bernard and me. Upon landing, the light turned into a beautiful fairy. Standing about five inches tall, Queen Gwendolen wore a skirt made of champagne colored rose petals, decorated with Forget-Me-Not bows. Her bodice, a velvety rose petal garment, led to her train of poinsettia petals. I wished Anya was here to meet this elegant beauty.

Sitting on the edge of my chair, I bowed my head. “Queen Gwendolen, it is a pleasure to meet you. I’m honored that you have taken the time to visit with me.”

Queen Gwendolen’s response sounded like the tinkling of sleigh bells. As I was about to say something, Bernard spoke up. “Santa, the ringing you hear is how Snow Fairies sound to us when they speak. Allow her to sprinkle White Pixie Dust, and you will understand her.”

“Why I have never heard of such a thing, but by all means, yes.” With that Queen Gwendolen rose above and sprinkled the dust on me. As she landed back on the table, I felt a slight tingling, and looked at Bernard. “Is it supposed to tingle?”

To my surprise Bernard did not answer. Instead, the Queen responded, “Yes, Santa, that is normal. Now that we can understand one another, let’s discuss your problem. Bernard has told me that you and your friend Leonardo are trying to get your reindeer to fly while pulling your sleigh.”

Discouraged, I responded, “If Leonardo can’t solve this, I am not sure how I will be able to get to all the homes on Christmas.”

“That is why I wanted to meet with you.” Taking a seat on the edge of a book on the table, Queen Gwendolen continued, “You see, in addition to the White Pixie Dust I used to help you understand what I am saying, Snow Fairies produce other magical Pixie Dust. One of them is red, and I’m sure it can help the reindeer fly.”

“That’s fantastic!” I stood up and began to pace in front of the fire thinking about what this would mean.

“We have been using the Red Pixie Dust on several animals and it has never failed,” Queen Gwendolen further explained. “Would you like to test it?”

More excited than a child on Christmas morning, I turned to look at the Queen and responded, “You bet I would!”

“Can you have your team of reindeer hitched to your sleigh first thing in the morning?”

“Thank you. I will return at that time with some of the Pixie Dust, and you can test it on your reindeer.” As she finished speaking, Queen Gwendolen’s wings vibrated, and I watched as the red glow floated across the room and out the door.

The next morning Bernard and Leonardo helped me hitch up the team. Sitting in the sleigh, waiting for Queen Gwendolen, the sun rose above the eastern horizon.  At that moment I saw the glow of the Queen approaching.

“Good morning Queen Gwendolen,” I said as she landed on the seat next to me.

“Good day to you, Santa. Here is the Red Pixie Dust,” she said placing a small bag in my hand. “Put just a pinch of the dust in the palm of your hand, and offer it to each reindeer.”

As I climbed down from the sleigh, Queen Gwendolen repeated, “Remember, just a pinch to each reindeer, not a bit more.”

Walking from reindeer to reindeer, I placed a pinch in my hand and let each one lick it off. When finished, I got back into the sleigh and took my seat next to Queen Gwendolen.

“Now call out the names of the reindeer and ask them in your own way to fly.”

Taking hold of the reins, I looked over to a smiling Bernard while Leonardo, standing with his arms folded, looked on with disbelief. Feeling uncertain and very nervous, I took one last glance at Queen Gwendolen, then snapped the reins as I said, “”Now, Dasher! now, Dancer! now, Prancer and Vixen! On, Comet! on Cupid! on, Donner and Blitzen! To the top of the porch! to the top of the wall! Now dash away! Dash away! Dash away all!”

The reindeer responded immediately, and within seconds, I was airborne. Excited, I watched as Bernard and Leonardo became smaller and smaller. Then I noticed the reindeer were flying willy-nilly all over the place. Pulling back on the reins, I soon got the team under control.

Flying for what seemed like hours, Queen Gwendolen said, “If you’re satisfied, we should return.”

I nodded my head and directed the team back to where Bernard and Leonardo were waiting. Once we landed, both applauded my first successful flight, giving me a high five as I jumped down from the sleigh.

“And that, Geordie, is how I met the Snow Fairies and had my first experience with Pixie Dust.”

Getting up from the couch, Geordie placed his empty plate on my desk. “What a fantastic story Santa. Have you ever been to Snow Land?”

“Ho Ho Ho, I am much too large to visit there.  But many of the fairies have visited the North Pole from time to time. Queen Gwendolen and I write and see each other often. Did I answer your question?”

“Yes you have Santa, and I can’t thank you enough for taking the time to talk with me. I am so happy to be part of your team,” Geordie responded as he made his way to the door and left.

Sitting back in my chair, I smiled. Sharing the story of the Snow Fairies with Geordie reminded me of how lucky I have been. Over the years as Christmas became an even bigger event, Queen Gwendolen introduced me to other types of Pixie Dust. “Well,” I muttered to myself while gathering the dirty dishes. “It certainly has paid off having the Elves and Snow Fairies as friends. Because of them, the magic of Christmas continues to grow.”

To read about Geordie misplacing my Fairy Dust Box please check out: Lost Fairy Dust, which was posted on May 11, 2020;