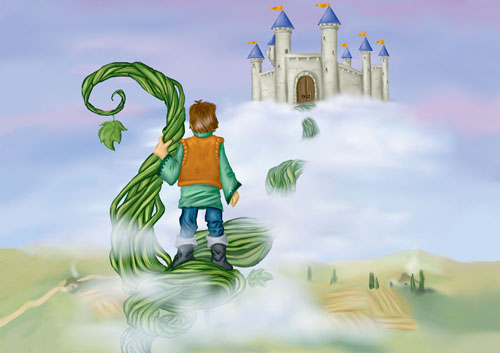 Ms. Claus and I sat on a bench in front of the campfire in the middle of the courtyard. The elves were singing campfire songs and making s’mores, when Dewey approached us. He was carrying a small brown cloth sack with a yellow draw string. “Can I show you something Santa?” he asked.

“Why of course. What do you have there?”

Dewey opened the sack and poured several beans into his hand. “I found these on a hike the other day, and I was wondering if they may be magic beans. I’ve never seen beans like these before at the North Pole.”

I reached over and took one of the beans to inspect it. After looking from several angles, I placed it just below my nose to see if there was a scent. “I’m afraid these are just ordinary Lima Beans that are sometimes called butter beans. My guess is they were dropped by the exploration team that was visiting last month.”

Seeing disappointment on Dewey’s face, I added, “Magic beans are extremely rare. I remember a story about them from a long time ago.”

“Can you tell me the story?” Dewey asked regaining his excitement.

“Of course.” As Dewey sat on the ground in front of me, I leaned forward on the bench to tell the tale.

A long time ago, Naira, a big-eyed giant, lived in a castle on a large stratocumulus cloud. One morning she was making breakfast for Magnus, her husband, when there was a knock on the door. She headed to the door wondering aloud, “Did Magnus lock himself out?”

The large old wooden door creaked loudly as Naira opened it. She stuck her head out to see who was there, but saw no one. Shrugging her shoulders, she stepped back and began to close the door when she heard a small voice say, “Excuse me.” She looked down to find a young boy from the land down below. “Who are you?” she demanded to know.

The giant woman kept looking all around, as if afraid someone might see Jack, then asked, “Are you hungry? I was just making breakfast. Please come in.”

As Naira stepped aside, Jack entered the castle. “Thank you. I would love some breakfast.”

Walking into the kitchen, the giant woman then asked, “What are you doing here and how did you get to this castle?”

Naira placed a plate of cheese and a glass of milk on the table, and Jack climbed up the tall chair and stood on it in order to reach the food on the table. In between each bite, he told her the story of how poor his mom and he were and how they decided to sell Bessy, their cow, for seeds to plant and grow more food. Drinking his milk, he explained how he met a man on the way to town who offered him three magic beans for the cow.

Naira interrupted Jack saying, “That had to be that old man Fogey! He’s done this before. You took the beans, didn’t you?”

“He told me they were magic, and I believed they would help us grow even more food.” Embarrassed, Jack hung his head and continued, “Mom was really disappointed and upset with what I did, and I threw them out my bedroom window.”

“When you awoke, is that when you found the bean stalk growing up into the sky?”

Just then the entire castle began to shake and Jack heard a loud thump, thump, thump from the hall.

“That’s my husband Magnus, and there is nothing he likes better than boys boiled and served on toast for breakfast.” Looking around the room, Naira took the lid off of a copper pot sitting next to the stove and demanded, “Jack, get in here. Quickly!”

Jack climbed down from the chair and jumped into the pot, just before the giant entered the kitchen. “I’m so hungry I could eat three cows.” Magnus then tilted his head back as if to smell something when he chanted,

“Fee-fi-fo-fum,
I smell the blood of an Englishman,
Be he alive, or be he dead,
I’ll grind his bones to make my bread.”

“You know we haven’t had a boy for breakfast for years,” Naira told Magnus. Now go wash up and when you get back, I’ll have your breakfast on the table.”

As the giant left the room, Naira heard the lid of the pot rattle and quickly told Jack, “Wait! Magnus will not be long, and you will not have enough time to get out. After his breakfast he will take a nap, and then you will be able to safely leave.”

Magnus returned, carrying a basket of gold eggs and a sickly-looking white hen. He growled “Lay!” and the hen laid a gold egg, which Magnus put in the basket. After finishing his breakfast, the giant went to the closet, and pulled out a harp with the sad face of a young girl. This time he barked, “Play!” and the harp played and sang a gentle lullaby. Shortly thereafter, the huge creature began to nod and snore, shaking the castle.

Naira lifted the lid from the copper pot and told Jack, “Now is the time for you to leave. He won’t sleep for very long.”

Jack climbed out of the pot and began walking to the door. Suddenly, he turned back to look at the hen and harp, and asked, “Will they be okay?”

Naira stood and just stared for a moment, then said, “You should take them with you. We do not need them, and the hen will help you and your mother return to prosperity.”

Jack grabbed the harp and Naira handed him the white hen. As he placed the hen under his arm, the hen clucked, waking Magnus. “Wife what have you done with my harp and hen?”

Jack started running down the winding road back to the bean stalk, as fast as his feet would take him. Magnus followed, but before he could catch up, Jack disappeared. Magnus peered through the clouds and saw Jack climbing down the bean stalk. Stomping his large foot, he angrily roared,

“Fee-fi-fo-fum,
I smell the blood of an Englishman,
Be he alive, or be he dead,
I’ll grind his bones to make my bread.”

Magnus began climbing down after Jack, but as the boy neared the bottom, he hollered for his mom to bring his axe. Jumping to the ground, he handed the harp and hen to his mother. Taking the axe from her, he began hacking away at the bean stalk.  With all the wood chopping he did, he was able to cause the stalk to teeter and collapse, forcing the giant to fall to the earth and break his crown.

Naira, watched it happen from the hole in the cloud, and when it was over, a large smile filled her face. Then she whispered to herself, “Finally, I’m free from that mean ogre!”

Three months later, when Naira looked down again to check on Jack and his mom, she was pleasantly surprised to see that they were able to buy back Bessy and enough seeds to plant for food. The giant woman grinned as she noticed the feast Jack and his mother had prepared for their neighbors, complete with beautiful music from the now happy singing harp.

And Naira, Jack, and his mother lived happily ever after.

When I was finished with the story, I was surprised at the number of elves who had gathered to listen. Dewey spoke for all the elves, when he said, “Santa, that is the first time I heard the story of Jack and the Bean Stalk from the view point of the giant’s wife.”

“I’m glad you liked it!” I exclaimed. “I hope you remember that there is always more than one side to any story. Listening to all of them certainly gives you a better understanding.”

I hope you enjoyed today’s story. Another one will post another one next Monday. If you have any comments or if there is something you would like me to tell you about, please feel free to leave me a comment. Until next week . . .