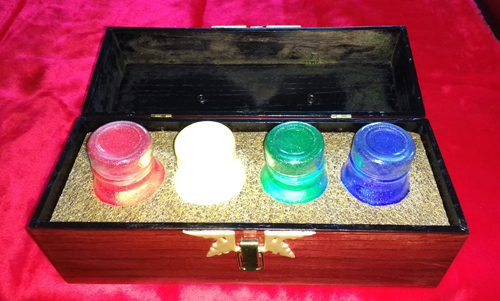 “Good morning, Carter,” I called out as I entered the mailroom. “Have any letters for me today?”

“I have them all ready for you,” Carter replied, picking up a stack and handing them to me. “No sensitive letters today,” Carter explained happily, “but many of the children’s letters reveal how much they miss seeing you. I think you’ll have fun reading them.”

Putting the stack under my arm, I headed for the door. “Thanks, Carter. Where’s Ms. Claus? I thought she was working with you today.”

Carter smiled. “How easily you forget. It’s Spring, and what does Ms. Claus do every spring?” he asked laughing.

I thought a moment and nodded. “Spring cleaning!” I exclaimed. “Should have remembered because she does it every May. Once she starts, she doesn’t know when to stop. Is Sophia helping her this year?”

“No, Sophia has other work to do, so Ms. Claus is training three of the younger elves – Carlton, Regan, and Geordie- to help. I think she’s on a mission to develop a squad of elves who will be responsible to do deep cleaning more than twice a year,” Carter explained and then added, “I wonder what lost items Ms. Claus will find this year.”

Grinning, I opened the door. “As long as everything is clean, organized, and put back in place, I don’t care what she finds.”

Walking towards my office, I remembered how Ms. Claus had found my favorite pair of Christmas socks last May wedged between the wall and the back of our bed. “She has never let me forget that one,” I muttered as I opened the door to my office.

Placing the letters on my desk, I noticed how clean the office was and knew that Ms. Claus and her team had already been here. Taking a quick glance around the room, everything appeared to be in place, so I settled down to look at the letters.

Many of the them revealed how the children had adjusted to staying at home because of the COVID-19 virus. Several of them were struggling with classroom work now that schools were closed, but I was impressed with the way many of the children were making the best of a bad situation.

About half-way through the letters, however, I came across one that was asking about the green fairy dust I use to tele-transport toys from the North Pole to my bag in the sleigh. The little girl wanted to know if the dust could transport people as well, which it can’t do.

As I thought about the fairy dust, I noticed a delivery ticket on my desk, indicating that my order of fresh fairy dust had arrived that morning. I swiveled around in my chair and unlocked my dust safe and quickly checked to see if it was there. Satisfied, I turned and picked up another letter. However, this time I had an odd feeling that something wasn’t right. Standing up, I carefully looked around the room again; then as I stared at my desk, I felt my heart sink when I saw the corner of my desk empty.  My traveling box of fairy dust was gone.

After looking behind and under everything in my office, I slumped back down into my office chair. I tried to remember when I had the box the last time and what I might have done with it. Because of the importance of the fairy dust, I was always very careful with it.

The longer I thought about where my traveling dust box could be, the more worried I got. Then it hit me – could Lyra be behind the disappearance? Her inquisitive nature had led her to take some of my red fairy dust on two separate occasions in the past.

Feeling confident that Lyra was the culprit, I headed over to the doll toyshop where Lyra worked. Entering, I found her organizing the clothes for the dolls. “Lyra,” I called walking up to her, “Do you know where my traveling fairy dust box is?”

Putting down the dresses she had in her hands, Lyra turned to me and answered, “No Santa. Why would I know where your dust box is?”

“I thought maybe you wanted to do something for me again, like you did with Rudolph and the red fairy dust.”

Surprised at my questions, Lyra gave me a serious look and responded, “Remember, I promised you I would not go into your office again without your permission, and I have kept that promise.” Noticing how worried I was, Lyra added, “Was there anything wrong with it? Maybe Woody took it to the wood toyshop to fix it.”

“That’s got to be it Lyra! Just the other day I told Woody that one of the hinges was loose. He may have picked it up to make the repairs.” Turning to hurry over to his shop, I thanked Lyra and felt relieved that the mystery had been solved.

When I arrived, Woody came right over to greet me. “Morning Santa, what brings you to my place today?”

Feeling certain that Woody had the box, I said, “I was hoping you were able to fix the hinge on my fairy dust box, and thought I’d save you the trouble of bringing it over to me.”

As if to apologize, Woody responded, “What makes you think I have it, Santa?”

“Well the box is not in my office, and I just thought you took it so that you could work on it.”

“Santa I would never just go into your office and take something of yours without telling you. I’ve been busy in the shop here and planned on fixing it in my free time.”

Noticing my gloomy facial expression, Woody asked, “Are you sure you did not put it away somewhere and just forgot?”

“I’m sure! I always keep it on my desk, so I can easily find it when I need it.”

“I’m sure it will turn up Santa. When it does, let me know and I’ll fix it right away.”

I thanked Woody and left the shop with my head hung down and my shoulders hunched forward. Walking back toward my office I grew more and more concerned that the fairy dust was lost.

Just as I reached for the door handle, I heard Bernard call from behind, “Santa! Why so sad? Is there something I can do for you?”

“I’m not sure anyone can help me. I seem to have lost my fairy dust box.”

“The one you keep on your desk?”

“Yes, and I’ve been looking for it all morning with no luck.”

Bernard thought for a minute and asked, “Did you ask Ms. Claus about it?”

“Well… I saw Ms. Claus and her cleaning crew coming out of your office this morning just after breakfast. Maybe she put it somewhere.”

While Anya likes things in their proper place around our house, I’ve never known her to put things away in my office. At this point though, I was getting desperate now and answered, “I don’t think she would do that, but maybe she did notice it while her team was cleaning. I’ll call her and see. Thanks Bernard.”

While moving down the hallway, I made the call.  Hearing a cheerful ‘Hello’ when she answered, I asked, “Where are you? Are you still with your cleaning team?”

“We just finished the entrance hall and are heading towards the Great Room. Lots to clean there, but we are making headway.” Pausing, she waited and then added, “Is something wrong? Your voice sounds odd.”

Worried that I may not get the answer I hoped for, I hesitated before asking, “You wouldn’t know anything about my fairy dust box, would you?”

“You mean the one on your desk?”

“Yes,” I answered a bit agitated.

“Hummmm, let me talk to my crew. Can you meet us in the Great Room?”

“I’ll be right over,” I responded as I put the communicator down.

By the time I arrived on the other side of the North Pole complex, Ms. Claus had her crew members standing at attention looking uneasy.

Addressing all of them sternly, I explained, “Since you were in my study today cleaning, I wondered if any of you saw my fairy dust box? It is important, and without this box Christmas may not happen.”

The three elves stood with their heads down. One of them finally looked at me. “Santa, I’m so sorry. I was just trying to do a good job and make sure the fairy dust was safe because I know how important it is to you,” Geordie explained quickly.

Sensing that Geordie was nervous Anya remarked, “While we were straightening your office this morning, the Snow Fairies came by with a delivery. I signed for it, placed the ticket on your desk, opened the safe and told Geordie to put it inside.” Turning her eyes on Geordie, Ms. Claus prompted the elf to finish her explanation. “Just be honest and tell him what happened.”

“Well…. I started to put the new shipment into the safe and noticed another box marked Fairy Dust on your desk, so I grabbed it and placed it in the back of the safe, behind the new dust. Ms. Claus had told us how important the dust was, so I figured it all went into the safe.”

“I’ve been looking for that box all morning, and was beginning to think I lost it,” I answered placing my hands on my hips.

“Before Geordie could respond, Carlton jumped in and added, “Geordie didn’t mean to be careless; he’s a hard worker. We all know how important the fairy dust is to you Santa, so the three of us figured all of it belonged in the safe. Seemed like the right place.”

As the elves nodded in agreement, I smiled realizing that all three had made the decision to be honest rather than one elf taking the blame.  Putting my agitation aside, I praised the three but added a fair warning. “Though I appreciate your diligent work, next time, check with Ms. Claus before you make decisions. I like all my things in the exact spot where I put them. That way, I always know where they are. Have I made myself clear?”

Extending my hand towards them, I smiled. “Let’s bump on that.”

Relieved, Geordie, Regan and Carlton grinned and we all exchanged elbow bumps. “Thanks Santa, for understanding.”

“Now,” announced Ms. Claus, “I think we need to take a break. So make your way to the dining hall and get yourselves some lunch. I’ll meet you afterwards here in the Great Room. We still have lots to do.”

While the three elves scampered off, Ms. Claus slipped her arm through mine as we walked down the hallway. “They are young,” she explained, “but hard-working. They’ll learn.”

Feeling relieved that the box was found I, I relaxed. “I agree, but next time my study gets cleaned, I’d prefer that you do it Anya. Okay?”

Smiling at me, Ms. Claus reached up and kissed my cheek. “No problem Santa. It’s nice to know you trust me.”

“Always,” I answered slipping my arm around her shoulder and giving it a squeeze. “What would I do without you?”