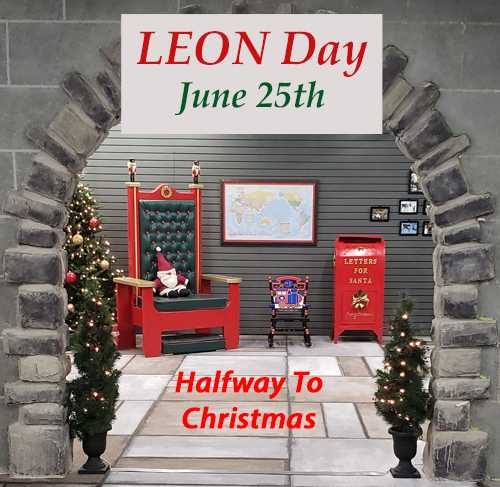 “Claus Ms. and Santa hi. Today you are how?” Snickers said as she walked backwards past Anya and me in the courtyard.

Howie followed wearing his clothes backwards, “Day great a having are you hope.”

Anya stopped and placed her hands on her hips as she watched the unusual behavior of the elves. “What has gotten into the elves today?”

“Don’t you know what today is?” I asked her.

“Today is Leon Day, which is Noel spelled backwards. Christmas was called Noel back in the 15th century. Today marks the half-way point between last Christmas and next Christmas.”

Smiling, Ms. Claus nodded. “That’s right; I forgot. But what about….”

Just then Bernard came by and interrupted, “Movies the to coming you? Hall meeting the in over “Story Christmas A” and “Reindeer Nosed-Red the Rudolph” showing are they.” Before we could figure out what he said, Bernard walked away backwards heading towards the Elf Meeting Hall.

“This is going to go on all day, isn’t it?” Anya chuckled.

“I’m afraid so. This is a newer tradition with children that started back about thirty years ago. As a matter of fact, there is one group trying to get Leon Day designated as a National Holiday in the United States! Our scout elves watched as the tradition took hold and, being fun loving elves, decided to start celebrating Leon Day themselves. It did not take long before all the elves joined in the celebration. I’ve noticed, however, that the elves have gotten more into doing crazy things in the last few years.”

“I’m noticing that,” replied Ms. Claus as she scooted out of the way of two elves racing backwards down the hallway. “I can understand that the children are excited because they are half way through the year to Christmas,” she added exasperated, “and can celebrate Christmas in July. But, other than being silly and having fun for the day, how do the elves see Leon Day?”

“Tomorrow is when the workshops begin production for the coming season,” I began, trying to avoid a line of elves as they ran backwards down the hall. “From then until Christmas, they will have to be serious and work hard to make the toys needed for all the children. Leon Day is like their last day of vacation, and they want to have as much fun as possible.”

“I don’t understand,” Ms. Claus stated. “The elves have been making toys for decades, and they seem to enjoy their jobs.”

“They do, but you are not in the workshops and don’t see what really goes on to start a new season,” I explained. “For instance, after developing a list of new toys that children seem to be interested in asking for, the elves have to modify the assembly lines in order to make them. It can be complicated and demanding for the elves.”

“I didn’t realize how difficult building toys could be,” Ms. Claus mused thoughtfully. “The elves are always so crafty that I thought designing new toys came naturally to them.”

“Well…. that’s true, but elves take great pride in their workmanship, so they plan and tinker until they have the right equipment and the toys do what they are expected to do. They want everything to be perfect and worry that they might not get it right.”

“I guess that explains why they have so much fun when they are not working,” Ms. Claus responded slipping her arm through mine. “So, remind me about what I should expect to happen today?” she asked smiling.

“Well you have already seen the most unusual. Since Leon is Noel backwards, the elves enjoy doing everything in reverse. They talk, read, and walk backwards, which I find hard to do. You probably noticed that some even wear their clothes backwards.”

“That explains why we had dinner at breakfast. I suppose breakfast will be served for dinner?”

“Yes, but at least lunch will still be lunch,” I joked.

“Are we expected to join in?”

“I think this is just for the elves. However, they are also showing all the Christmas movies at the Elf Meeting Hall today, and I would like to watch some of them with you, if you’re up to it.”

“As long as the movies are not played backwards, I’d love that. Do the children around the world act like the elves are?”

“They do. In addition, many families put up their Christmas trees and decorate their houses as if it’s Christmas and leave them up until the end of July. Several stores put Christmas materials on their shelves for sale. I’ve also known some children to have snowball fights.”

“Really? I can see that happening in the southern hemisphere where it is winter, but how would that work in the north where it’s summer time?”

“I wondered the same thing, but it turns out that some children make several snowballs before the snow melts and store them in a freezer until Leon Day, just so they can have a snowball fight,” I informed Anya.

“Now that’s dedication!” Ms. Claus exclaimed, “but I’d say that our elves are equally dedicated wouldn’t you?” she laughed, pointing to a group of elves continuing to reverse the order of their line while walking backwards toward the Elf Meeting Hall.

Nodding in agreement, I chuckled as the reversing got out of hand and the line fell apart. “Our elves know how to have fun,” I laughed. “If I didn’t know better, I’d think today was Christmas.”

“Movies some watch and cocoa hot and cookies some get let’s,” Ms. Claus said not wanting to be left completely out of the fun.

“Idea great a like sounds,” I said as I squeezed Anya’s hand and headed towards the meeting hall.