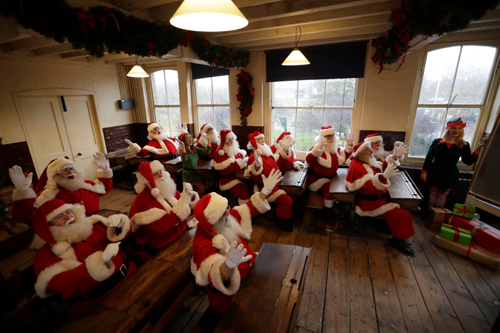 “What a beautiful day to fly,” I remarked to Faer, the coordinator of the J.A.T.S. (Jolly Assistants To Santa) Corp, as we flew south high above Toronto. When he did not respond, I glanced over and saw him hanging over the side of the sleigh.

“Wow! What is that tall pointy building down there?” Faer asked.

“That is the Canadian National Tower. I use it as a landmark to know where I am during my Christmas flight.”

“I’ve never seen anything so tall before.” 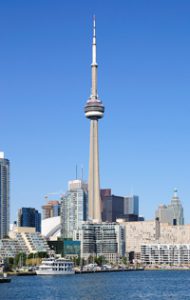 standing structure in the world. It was the tallest until 2007,” I informed him.

“Where are all the airplanes?” Faer asked, changing the subject.

“I had to file a flight plan, just like the airplane pilots do. That enables them to keep air traffic away from me.”

“So, you can fly anywhere you want, as long as you tell them?”

“Well I could, but I really do not want the children to see the sleigh if it’s not Christmas. I’ll fly directly to a specific place, like Santa Pat’s, and if I need to go anywhere, he’ll lend me his car to drive.”

Snapping the reins of Ms. Claus’ sleigh, the Dulcet, just a bit to get Clarice and Olive to pick up the pace a little, I continued, “We should be at Santa Pat’s place, just south of Cincinnati, around 11:00 am. Is that when you told him we would arrive?”

“It is and he said he would be waiting for us by his barn.” Shifting in his seat and turning toward me Faer asked, “Why do you always add ‘Santa’ to the J.A.T.S. names?”

“Since they visit children on my behalf, I call them Santa because I want them to think and act like me all the time.”

“Is that why you are always pushing your Assistants to learn more about you.”

“It is, and that is why there are so many schools to train my J.A.T.S.”

Looking over the side of the sleigh I watched as we came closer to the Ohio River. “What a beautiful sight,” I exclaimed. “Just over that ridge on the other side of the river, we should see Santa Pat’s place.”

“Is that Santa Pat down there next to that red barn?” Faer asked as we flew over the ridge.

As soon as we landed, Santa Pat, wearing red bib overalls, began unhitching Olive and Clarice from the sleigh, and informed us, “I’ll let them into the pasture where they can graze with my horses; then we can go in the house to talk.”

“The reindeer will like that,” I responded as Faer jumped out of the sleigh and opened the gate.

Walking towards the house, Santa Pat said, “I understand you have some concerns about some of the J.A.T.S. members.” Holding the door open for us, he continued, “Come on in. We can sit around the dining room table over there,” pointing to the right.

Three mugs of hot cocoa and a plate of cookies waited for us on the table. “My wife knew you were coming and made these this morning.” Looking right at me, Santa Pat smiled and winked. “She promised not to tell Ms. Claus that you had cookies. Now let’s talk about your concerns.” he stated getting straight to the point.

As we all settled in our chairs, I began, “I am very proud of the great job most of my assistants do, but I sometimes see children who remind me about our last encounter. Several of the things they say I told them are just not correct.” Taking a sip from my mug, I continued, “For example, I had one little boy tell me that Rudolph was born with a red nose, when he actually got his red nose because Lyra gave him too much red fairy dust.”

Taking a cookie from the plate, I continued, “Several little girls seem to think that all Ms. Claus does is bake cookies. The girls especially need to know how important she is to me at the North Pole. She oversees the mail room and makes sure that any sensitive letters that I need to know about get to me right away.”

Holding his mug with both hands, Santa Pat responded, “Some of the misinformation comes from the assistants taking everything they read in story books as true. We are always trying to make members of the Corps better at their jobs,” he explained, “but there is still a lack of consistency. We are working on that.”

“I have been very impressed,” Faer remarked breaking into the conversation, “with some of the schools that assistants have started to help would-be Santas. I especially like how the local groups who get together help each other, like the Bluegrass Santas.”

“Yes, you have Santa Pat. I’ve noticed that the members of the Corps who have been around for several years seem to all be working hard to imitate me as best they can. I’m concerned, however, about the ones who are new each year, and have not yet attended any of these ‘Santa’ schools,” I stated as I placed my arms on the table clasping my hands.

Knowing what I meant, Pat explained, “The experienced assistants are always on the lookout for new Santas. When they find them, they invite them to a meeting and then encourage these men to attend schools and training sessions so that they can be better prepared.”

“What about those who want to become Ms. Claus? Do you do the same for them?”

“That is great news and will make Ms. Claus very happy!” I responded clapping my hands.

Taking his second cookie, Faer asked, “Are you going to the International Santa Celebration in April? I hear there will be as many as 600 Santas and Ms. Clauses there. It’s being held in Atlanta, right?”

“You’re right Faer, and yes I am going. Several workshops will be given during the event so that the J.A.T.S have a chance to learn how to be more like you Santa. I will make it a point to talk with other coordinators and school operators about better Santa training.”

“Sounds like a good idea.”  After a short pause in the conversation I asked, “Do they work on their appearance as well?”

“They work just as hard at their looks as they do on acting like you,” Santa Pat said putting his empty cup on the table. “One Santa even makes peppermint scented beard balm so they smell like they came from the North Pole.”

Placing both hands on my belly, I chuckled, “Nothing better than a well-rounded, forgive the pun, J.A.T.S. I have to laugh at times when a child tells me I’m not the real Santa because they just saw him somewhere else.”

“And that means our training is working!” Pat exclaimed with pride.

“Yes! And it also means that if the children question who the real Santa is, then they still believe in me,” I explained.

“Standing up, Faer looked at his watch and said, “Santa we need to be getting back.”

After the short walk back to Santa Pat’s barn, he and Faer hitched the reindeer to the sleigh and I remarked, “This trip was well worth the time. I’m more confident than ever that the J.A.T.S. Corps will be ready for the season.”

It only took a couple minutes for the reindeer to get us up above the clouds. The sun was setting on the western horizon in an array of brilliant reds. “Can you keep a secret?” I asked Faer.

“You know I can Santa.” Noticing the thoughtful look on my face, Faer continued, “What’s on your mind?”

“I think that Santa Celebration may give me an opportunity to see many of my J.A.T.S. in person. And since very few have ever seen me, they will think I am just one of them. I’d be able to see firsthand how well they are doing at portraying me and be able to take part in the discussions about being Santa.”

“You should take Ms. Claus as well. With more and more women portraying her, I’m sure she would like to see how they are doing as well.”

“Great idea!” I exclaimed. “This is exciting and I can’t wait to tell Ms. Claus. Could you make the arrangements for us and make sure no one finds out? I want us to be able to observe members of the Corps without them knowing. I don’t want us to be the center of attention. It would weaken the purpose of the workshops.”

“Consider it done!” Pulling a blanket up over his legs, Faer chuckled, “What an adventure you and Ms. Claus will have blending in with the others.”

To read about how Rudolph got his red nose, please check out “How Rudolph Got His Nose” posted on September 2, 2019.

Photo by: Matt Dunham, The Associated Press, at the Ministry of Fun Santa School