If I Could Be Anything 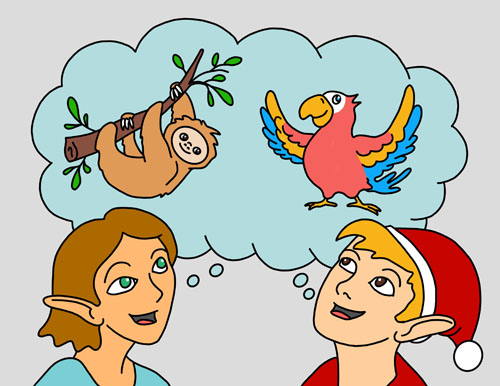 “Can someone please pass me a graham cracker,” Quinten hollered over the chatter of elves around the fire.

Ms. Claus and I had just settled down on a bench by the fire ring in the North Pole Village courtyard, where the elves were busy toasting marshmallows for S’mores. “Santa, have I ever told you that sitting by the fire with you and watching the elves have so much fun is one of my favorite activities.”

“Maybe once or twice,” I responded laughing.

As Sophia licked the chocolate and marshmallow from her fingers, one at a time, she said, “Let’s play a game!”

All the elves began shouting out the names of games they wanted to play. I put my hands out in front and motioned for the elves to settle down. Once I could be heard without shouting, I said, “That sounds like a fun idea Sophia. Since it was your idea, what game would you like to play?”

“I’d like to play, ‘If I Could Be Anything,’” Sophia responded.

“Is that the one where you name whatever you would like to be if you could choose?” Anya asked, excited about playing a game.

“Yes, but with a little twist,” Sophia responded as she placed another marshmallow on her stick and held it over some glowing coals. “Instead of naming what you would be and explaining why, we should describe what we want to be and everyone else guesses what it is. Whoever gets it right goes next.”

“Since it was your idea Sophia, you should go first,” I instructed her.

“Okay.” Checking her marshmallow, the elf began. “I can dress in bright colors and sometimes travel great distances as the seasons change. The biggest thing I like is the ability to fly high above and look down on everything.”

Standing up, Lyra put her hands on her hips and announced, “What I would like to be is covered with fur to keep me warm in the winter and cool in the summer. I am fast and love to chase other animals, but more to play than to defeat them. Someone usually takes care of me, and while petting me makes my caretaker feel good, I like it even more.”

“Who would not know this one,” Slacker yelled as he slid a marshmallow onto his graham cracker. “Ever since you kept and hid Crosley and Mattie from Santa, we all know you’d choose a dog.”

As Slacker took a bite, he waited while enjoying the taste of a S’more. Finally, he announced, “You will never guess what I want to be.”

Anya and I looked at each other as Slacker continued eating. Chuckling, I asked, “Do you think you can take a break from that S’more long enough to describe what you would be?”

“Okay, here you go,” he said. “I spend most of my time eating and sleeping. It can take up to a month for me to digest a meal, which leaves me with little energy. I sleep as much as 20 hours a day.”

“You’re an alligator!” shouted an elf from the other side of the fire ring, while the others remained silent.

“Not an alligator,” Slacker responded with a smirk. Hoping no one would guess, he continued, “I move very slowly, and I am the slowest animal on the planet. Hanging out in trees in the rain forest, I can often be seen using my claws to hang upside down.”

Ms. Claus stood up and waved her hand to get Slacker’s attention. “If I didn’t know better, I would think you are describing yourself.” As all the other elves began laughing, Anya continued, “The one animal that is most like you would have to be a Sloth.”

“I can’t fool you Ms. Claus. Now it’s your turn,” Slacker said as he sat down and continued to eat his S’more.

“I enjoy the friendship of others like me. Running and jumping are some of my favorite things to do. Exploring areas with my friends allows me to see different places. But, most of all, I can carry someone who can’t run as far or as fast as me.”

Putting my arm around Anya’s shoulder, I answered, “Ever since I first met you, horses have always been your second love. Second to me of course.”

“You know me well Santa,” Ms. Claus responded as she fluffed my beard. “Now let’s see if we can guess what you are.”

“As a leader, I am protective of those I live with, and will courageously defend them. If you are respectful and fair, I will be fair and respectful in return.” After giving my description, I noticed confusion on the faces of some elves.

“Santa, you are supposed to describe an animal you want to be, not yourself,” Doheny shouted as she placed a new log on the fire.

“I am describing an animal. If I was this animal, I would also have the ability to adapt to whatever changes come my way. You would also find me to be determined, and not likely to give up. As a matter of fact, I never lose.”

“You’re making this all up Santa!” Folding his arms on his chest and leaning back in his chair, Sledge continued, “Everyone loses once in a while.”

“Not this animal. You see, either I win or I learn, but never lose! Lastly, I am proud and listen to and learn from my elders.”

When no elf was guessing, Bernard stood up and said, “I can’t believe no one has guessed this yet.” Giving the elves a little time to respond, Bernard finally blurted out, “He is a wolf!”

“Bernard is right, If I could be any animal I wanted, I would be a wolf, whose personality and loyalty to their pack is something we could all learn from,” I announced. Looking at the faces of the elves around the fire pit, I added smiling, “I think all of you have a bit of wolf in you as well. After all, we have worked together and learned from one another how to make Christmas so much better for the children!”

To read about how Lyra got her dogs please check out: New North Pole Residents, which was posted on March 9, 2020;