I Think We Can 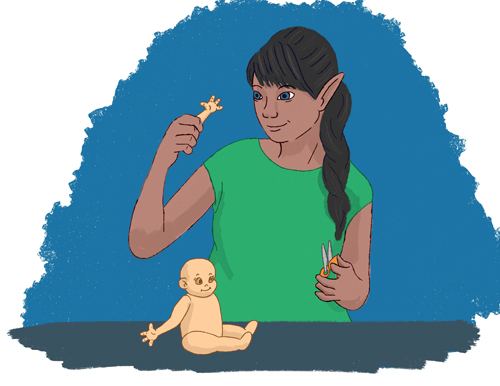 Now that things had settled down after Christmas, Ms. Claus and I were relaxing in our PJs and drinking Judy’s special dark hot cocoa. “You know Anya, I am always surprised at just how serious the elves take making toys.”

“Doesn’t surprise me. You are usually busy reading all the letters and visiting with some of the children before Christmas, and aren’t always aware of everything that happens around here.”

“What do you mean?” I asked as I placed a log on the fire.

“Because I am not as busy as you are,” Anya explained, “I talk with the elves and sometimes help out when needed. The elves never want to disappoint you or the children, but I’ve seen some of them become very sad when they think they may not make enough toys!”

Surprised by her explanation, I turned in my chair to face my wife. “I can’t say that I’ve ever seen a sad elf. That’s serious,” I said stroking my beard.

“I agree, but sometimes that sadness brings out their best qualities,” Anya answered patting my hand. “Have I ever told you about Cocoa and Lyra?”

“It really shows what I am talking about,” Anya said shifting in her chair to look at me. “Well on Christmas Eve you were really busy, as usual, and the elves were working hard to get the final toys made . . .

Working in the Doll & Dollhouse workshop, Cocoa struggled to meet her goal. “I have not made my share of dolls yet,” Cocoa thought to herself. “If I don’t make enough, there may be a little girl somewhere who does not receive what she asked for under the tree.”

As the end of the workday got closer, Cocoa found herself falling further behind. Frustrated, she stopped Howie, who worked in the Electronic Toys & Games department. “Howie, I was wondering if you could help me for a bit?” she asked, “I am behind in making dolls and worried that a child may not get her doll for Christmas.”

Howie placed his hands on his hips and responded, “Sorry Cocoa, but this is not my department. What do I know about making dolls?” Before Cocoa could respond Howie was gone.

Continuing to work as hard as she could to get her dolls made, Cocoa fretted even more. “I could never forgive myself if someone didn’t get her doll because of me,” she said aloud, even though there was no one there to hear her.

Glancing up to see the time, she noticed another elf coming her way. It was Bricken, a worker in the Building & Construction toyshop. As soon as he was close enough, Cocoa called out, “Bricken, I know it’s not your department, but do you think you could help me. I’m afraid I will not make enough dolls by the end of my shift and thought . . .”

Before Cocoa could finish, Bricken passed her. Turning as he continued to walk, he said, “Sorry, Cocoa, but I’m really late meeting my friends. Though it was hard for me to make my quota, I did. I know you will too,” he responded as he moved faster.

Cocoa felt tears roll down her cheek as she looked at the clock and realized that without any help, she would not make the number of dolls Patches, her supervisor, asked her to make. While brushing away the tears, she heard humming and whistling. When it became louder, the little elf realized it had to be Lyra.

As one of the Supply Elves, Lyra made sure that the toy makers had all the materials they needed. According to rumors at the North Pole, Lyra’s big heart made her one of Santa’s favorites. While the elf approached, Cocoa wiped the tears from her face and took a deep breath. “Lyra,” she said stopping her, “I am not going to make enough dolls today to fill all of Santa’s needs unless I can get some help.”

“You realize that I’m just a Supply Elf and don’t actually make any toys,” Lyra responded.

“I know, but it’s really not that hard. I just can’t bear being the one to let those little girls down.”

“How many more do you need to make?” Lyra asked.

“I have just a little less than an hour to make 50 dolls. I usually make about 30 in that time.”

Lyra stood for a moment rubbing her chin as she thought about Cocoa’s situation. Suddenly, she pulled out a chair from the table and shouted, “I think I can! Let’s get started.”

Once Cocoa was confident Lyra knew what to do, she looked at the clock and realized that she had fallen even further behind. “We’ll have to work faster, if we want to keep all the little girls happy.”

It was not long before Cocoa noticed that Lyra was making dolls as fast as she was. Though all Lyra said was, “I think I can,” Cocoa realized that they might just get enough dolls made. Then Cocoa smiled and joined Lyra. Together they sang, “I think we can! I think we can!” as the two continued making dolls.

Working faster and faster, the two elves noticed that the number of completed dolls grew. When the bell rang to signal the end of the day, Cocoa looked at the bin full of dolls and remarked, “We did it! Not only did you help me to meet my goal, it also looks like we made a few extra.”

Cocoa stood and gave Lyra a huge hug, “I cannot thank you enough. Now everyone who asked for one of these dolls will get one.”

“I thought I could help, and once I got the hang of making the dolls, I knew we could do it!” Lyra exclaimed proudly.

“Well, I don’t think I could have done it without your help. Thank you so much!” Cocoa said.

“Of course, you could have done it. Patches would not have asked you to make them if she did not think you could. The only thing you were missing was the belief that you could do it. Believing in yourself is the most important thing,” Lyra said. Slipping her arm through Cocoa’s, she turned and the two made their way towards the door. Then the elves began skipping down the hallway singing, “We thought we could and we did! We thought we could and we did!”

Ending her story, Anya looked at me. “We have amazing workers, don’t you think?” she declared.

“You are so right my dear,” I answered as I stood up to stretch.

“The elves take their work more seriously than you might think,” Anya said as she walked over to give me a hug, “they often help whenever and wherever needed, and my dear,” she continued, “that makes Christmas even more special at the North Pole.”